PETALING JAYA: A retired high-ranking police officer threatened to walk out of a Malaysian Human Rights Commission (Suhakam) inquiry into the disappearance of Joshua Hilmy and Ruth Sitepu on Wednesday (Jan 6).

Comm (Rt) Datuk Awaludin Jadid, the former principal assistant director of Special Branch's Social Extremism Division (E2), was agitated when he was questioned about a speech that he had made about extremism in November 2016.

“Why are we referring to an old ceramah in 2016? I don’t understand why. What is the reason... I have already given the same answer. Why don’t you just refer to the transcript or notes of proceedings on that, ” he said on Wednesday (Jan 6) in response to questions by Bar Council observer Lim Heng Seng.

“If you keep on asking the same thing, for me it’s unfair. You call me from my retirement to come here. You are circling into the same thing. It’s already been given.

“I feel like walking out of this room but just because I respect the law and Suhakam (he didn’t walk out), ” added Awaludin during the inquiry which was streamed live on Zoom.

Back in July 2018, Awaludin had been questioned in an inquiry on the disappearance of activist Amri Che Mat, with the 2016 speech being brought up.

The chairman of the panel of inquiry Commissioner Datuk Seri Hishamuddin Yunus told Awaludin to be calm and composed, saying that the counsel had the right to ask any question.

“You still represent the police, so be careful. That image is very important, ” he said.

Joshua and Ruth were last seen on the night of Nov 30,2016, and have not responded to any of their messages or calls since that date.

In April 2019, Suhakam concluded in their inquiries that Pastor Raymond Koh and Amri were victims of "enforced disappearance by state agents".

In announcing the findings of the public inquiry, Suhakam had said that there was "direct and circumstantial evidence which proves, on balance of probabilities, that he was abducted by state agents, by Special Branch, Bukit Aman."

In a statement, Ruth’s family said that 2020 was difficult for them as they did not know the whereabouts of Ruth and Joshua but that the public inquiry was the only silver lining and their hope of finding them.

“The pandemic has rendered us unable to be present in person, but our thoughts and hearts are at the public inquiry.

“We thank Suhakam and all parties who seek to reveal the truth on the disappearance of Ruth and Joshua for their commitment. We look forward to hearing the progress of the inquiry, ” they said. 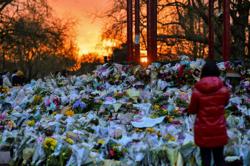