Noor Hisham: Sabah pupil case has not led to clusters

PETALING JAYA: No clusters have been identified stemming from the primary school pupil in Sabah found to be Covid-19-positive, said the Health Ministry.

Its director-general Datuk Dr Noor Hisham Abdullah said there were two separate Covid-19 cases involving schoolchildren in Sabah but these were not classified as a cluster.

“When we looked into the two cases, we found that one pupil had not attended school. The patient has a fever and is being treated and when we did the screening, (the pupil) tested positive, ” he said in a press conference yesterday.

For the other case, he said, the child had other medical complications and was referred to a hospital.

“We have done sampling at the (child’s) school and none of the school children or teachers were infected, as of now.

“There were no clusters formed in the schools. Both children have been admitted to the hospital, and we have isolated them and are treating them, ” he said.

It is understood that the source of infection for the second case was still being investigated.

Clusters, he said, were only classified as such when there were at least two to three confirmed cases that were linked.

On the Sivagangga cluster in Kedah, Dr Noor Hisham said schools and kindergartens did not have to be closed in the state although there must be thorough cleaning of common areas in such places.

“We have identified the cluster in Kedah but we do not suggest the closure of schools and kindergartens, ” he said.

To date, he added, 143 people had been screened from the cluster, with six found to be positive, 67 negative and 70 with results still pending.

The Sivagangga cluster involved the owner of a nasi kandar restaurant in Jitra, a family member and four workers.

A total of 73 kindergartens and three daycare centres under Kemas in Kubang Pasu were ordered to close following the emergence of the cluster.

Some guardians and parents were believed to have gone to the restaurant.

“The three habits of social distancing, maintaining hand hygiene and wearing face masks are vital and must always be practised.”

Yesterday, there were eight new Covid-19 cases, bringing the country’s total cases to 8,964.

Three of the cases were imported while five were local transmissions.

The three new imported cases involved two Malaysians and one foreigner, coming in from Kazakhstan, the Philippines and Indonesia.

The five local transmissions all involved Malaysians, with three cases in Sabah, one in Kuala Lumpur and one in Johor.

There are currently 223 active cases, with three patients receiving treatment at the intensive care unit and one on a ventilator.

Five patients have also recovered from the disease, bringing the number of recoveries to 8,617.

The death toll remains at 124. 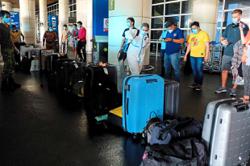 Covid-19 screening at KL airports get a boost