In a statement, party disciplinary committee chairman Chong Chieng Jen said Loh’s membership was terminated with immediate effect on the grounds of his defection.

“He is also removed from all his positions in the party, ” he said yesterday.

Loh was among 12 assemblymen seen with Tan Sri Musa Aman on Wednesday when the former chief minister claimed to have the numbers to form a new state government.

PKR’s Inanam assemblyman Kenny Chua, who was among the group, was also sacked by the party.

Its disciplinary board chairman Datuk Ahmad Kasim said in a statement yesterday that Chua was axed from PKR with immediate effect. 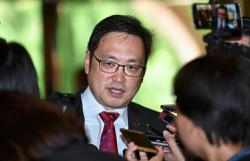