Speaking his mind: Shafee said Najib already went through a series of punishment as he had been charged in at least four courts, in addition to being hounded by the Inland Revenue Board.

Shafee, who is Najib’s lead counsel, said while it was an honest judgment and the judge himself is honest, he believes that Justice Nazlan “honestly made various mistakes”.“From the judgment in the defence or rather at the prosecution stage ... we found that the error has compounded.

“Perhaps he cannot unwind the reasoning that was provided. So I feel that we’ve got the strongest of chances to win the appeal,” he told a press conference after the High Court convicted and sentenced Najib yesterday.

Shafee added that this was the first case ever where a shadow director, who was not the director of SRC International, was considered as a person who could call the shots over and above the board of directors.

On the whole, Shafee said he was happy that the High Court found Najib guilty on all seven charges, adding that it would give them a better chance in the appeal.

“To me this is a better scenario to fight. We’ve got 10 more judges to hear this case, three in the Court of Appeal and seven in the Federal Court,” he said.

“You know me too well. I work better under pressure. Even though I’m disappointed, I’m not down.

“The similarities between me and Najib is, we work best under pressure,” he added.

Earlier in court, Shafee said Najib was willing to take the blame due to his fault of trusting people that ought to run the company – 1Malaysia Development Berhad (1MDB) – as well as SRC International Sdn Bhd.

He added that the former prime minister already went through a series of punishment as he had been charged in at least four courts, in addition to being hounded by the Inland Revenue Board. 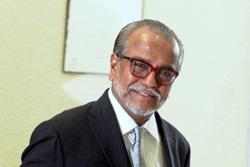