RENOWNED physicist Sir Isaac Newton, who established the foundations to understand the universe, did his best work when the black plague hit London in 1665.

He did all these despite a time of uncertainty where an entire society and its economy were upended by a dangerous disease.

His ideas eventually solidified into what is now commonly called the Toyota Production System (TPS), which has been adopted by many world-leading organizations across industries.

Both men overcame internal and external challenges, and made a tremendous impact in the world when they paved the path for exponential growth.

The question now is what are the paths, or patterns, leaders can emulate in their life and work to experience similar accomplishments?

Charting the course of growth

Rowse explains that crucial adversity can be the situation or environment leaders find themselves in which may generate a staggering fear of suffering and failure.

“Leaders can be incapacitated by fear, or they can use fear to drive them to take action and involved themselves in active experimentation to find solutions to the issues they face as in the case of Newton.

“As they search here and test there, they connect the dots and find patterns which guide and lead them to a moment of profound discovery, which is the Eureka! moment,” he said.

Along the way, leaders would want to engage with people who inspire them so they can receive continuous upliftment to drive them onwards.

“A compelling vision is also important,” Rowse continued, “because the vision supplies the fuel that leaders need, to push forward as they strive to realise their vision into reality as seen in the case of Ohno from Toyota.

“The glue holding these patterns together is immense love. Loving what you do and doing what you love is vital. Another crucial aspect relates to giving lovingly. When we do something out of immense love for others, and the world, our motivation takes on a whole new level and compels us to jump the S-curve,” he said.

Rowse pointed out that the seven patterns he identified do not necessarily flow sequentially from one to another as it will differ according to the circumstances.

He said being aware of these patterns enables leaders to leverage on them for maximum impact.

“There are times leaders jump the S-Curve as a result of being triggered by their highest passion, there are times people relentlessly pursue their experiments for game-changing results, and there are instances where people hit upon a Eureka! moment after observing different scenarios and being triggered by the right people while searching for the best solution,” he added. “My coach used disruptive coaching to unleash my maximum potential,” he said.

He and Chee are among the experts who will share their wisdom at the Global Leadership eSummit 2020, which focuses on the theme of rising up to exponential growth. 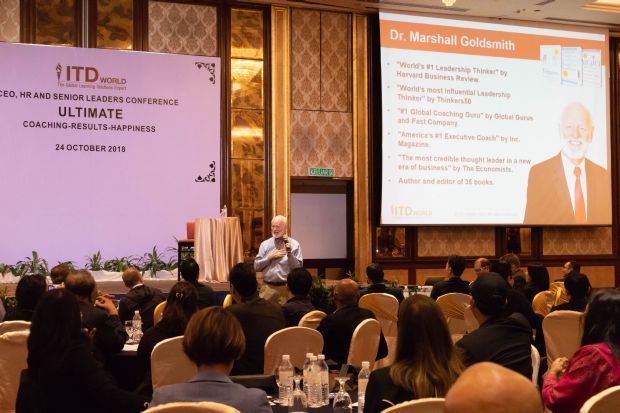 Global participants at the eSummit, scheduled for Sept 23-24, get to learn from all six while being challenged and inspired to chart their path toward exponential growth.

Those who register and pay at https://itdworld.com/gls2020/ will receive an online-only exclusive US$500 gift of a toolkit and assessment created by Goldsmith and Chee to chart a path for success. Do you know... Voting in the new normal