PETALING JAYA: Wedding banquet cancellations and delays left not only wedding couples with shattered dreams of celebrations. Restaurants are also sharing their pain.

According to the Selangor and Federal Territory Chinese Restaurant Operators Association, more than two million table reservations have either been cancelled or postponed in the Klang Valley since the movement control order (MCO) was implemented on March 18.

“This has resulted in a loss of up to RM3bil, ” said association vice-chairman Sia Boon Kong.

Association chairman Datuk Lum Tuck Loy added that cancellation and delays brought about by the Covid-19 pandemic were hurting the industry badly.

Establishments under his Imbi Palace Group of Restaurants have so far seen over 2,000 tables cancelled since the MCO, with more wedding bookings expected to be postponed to adhere to social distancing and new norms post-Covid-19.

As for Sia’s chain of Loon Sing seafood restaurants in Johor Baru, Negri Sembilan and Kuala Lumpur, over 10,000 tables have been cancelled or delayed.

“Couples usually pay between RM3,000 and RM20,000 in deposits upon booking and food tasting.

“Many of us are working with customers on postponing their banquets to another date, which will be decided on later.

“As for those restaurants that have decided to close temporarily or permanently, they do refunds, ” he said, adding that over 3,000 restaurants of different scales had closed down so far.

Sia noted that the restaurants still operating could not hold on for long due to their high overhead costs and reduced dine-in customers.

“The situation is further compounded when many of us are baffled by the different standard operating procedure (SOP) in different states about what is allowed in terms of table setting and the number of people at a table, ” he said.

To maintain a safe distance, he said all dining tables were seated at 50% capacity, which means a square table for four will allow two pax now and a standard 1.5m round table for 10 will take five pax.

“It is not viable to allow only four people at any table at a time, ” Sia explained.

“Ideally, seats should be allowed at 50% operating capacity according to the size of the table, ” he said.

Sia called on the government to come out with specific and clear guidelines for all to follow.

“Big restaurant groups like us often have the means and manpower to do more in implementing social distancing and crowd control by adhering to the SOP.

“If the government can allow all night and morning markets, as well as bazaars – where it’s harder to implement crowd control – in the Federal Territories to reopen, we should also be allowed to host banquets by following the guidelines, ” he said.

“All our 6,000 members have been making the necessary preparations for that.” 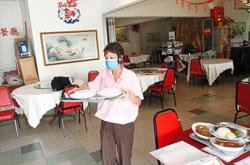