By ASHLEY TANG and MARTIN CARVALHO

PUTRAJAYA: A total of 1,500 people, comprising prisoners and employees from the Sungai Buloh prison, will be tested for Covid-19 after a former inmate tested positive for the virus.

Health director-general Datuk Dr Noor Hisham Abdullah said 800 inmates and 700 employees at the prison would be screened for Covid-19.

He said the prisoner, a foreigner, was detained as an undocumented worker since 2016 but left the prison on March 13.

He added that the prisoner had been transferred to the Malaysia Agro Exposition Park Serdang (MAEPS) quarantine centre for isolation and treatment.

"If we detect a positive case, we will immediately conduct active case detection on those who have been exposed to the prisoner, including the employees at the prison.

He noted that the Selangor health authorities would be conducting the investigation and contact tracing on inmates. 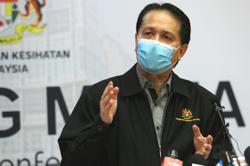