Under watch: A police officer guarding the Seri Petaling Mosque that hosted the tabligh gathering.

PETALING JAYA: The Health Ministry has identified sub-clusters of Covid-19 cases at several madrasah and tahfiz schools across the country after they had close contact with participants of the tabligh gathering at the Sri Petaling Mosque earlier this year.

A total of 62 positive cases were detected in a sub-cluster at a madrasah in Jerantut, Pahang, with 401 people screened – 297 were students while 104 were staff and their family members.

Twenty of those found to be positive have already been discharged, with the rest being treated at the Tengku Ampuan Afzan Hospital in Kuantan.

At a madrasah sub-cluster in Peranti, Penang, a total of six positive cases were detected with four of them already discharged.

The Sungai Lui madrasah sub-cluster in Selangor has seen 90 positive cases detected, with 67 people being discharged so far.

The rest are being treated at Hospital Sungai Buloh.

A total of 282 people – 274 staff and eight staff – had been screened at the area for the disease.

At a madrasah in Jasin, Melaka a total of 37 cases had been detected, with only one case being discharged so far.

Altogether 137 people – 122 students and 15 staff members- had been screened.

Dr Noor Hisham said the Health Ministry would work with various agencies and take a targeted approach to test all those who had contact with the high-risk group.

He also urged the public not to blame or discriminate against any patients or groups linked to Covid-19 clusters.

“Don’t stigmatise them. What is important is we detect and treat those detected with Covid-19 together with their close contacts and families.

“The public is urged to give their cooperation to the agencies involved to curb the spread of the disease,” he told a press conference on Sunday (April 12).

The Sri Petaling tabligh cluster makes up most of Covid-19 cases in the country, with Dr Noor Hisham previously saying that five "generations" of positive cases had been linked to the gathering at the end of February and beginning of March this year. 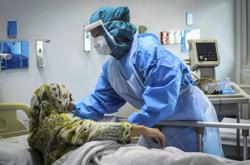