GEORGE TOWN: A 26-year-old man was killed after his car crashed into the barrier at KM2.8 on the Penang Bridge in the early hours of Friday (March 6).

Lim Yen Tat was driving from the island towards the mainland when he lost control of the vehicle at about 4.55am.

The impact of the crash broke a section of the barrier and Lim's car overturned and was badly smashed.

Firemen arrived at the scene and extricated Lim's body at 6am before he was pronounced dead.

The impact of the crash broke a section of the barrier of the bridge.

Police are investigating the case. 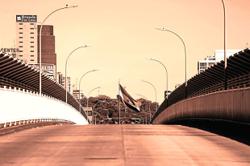 Aviation execs: Barriers in cabin will boost confidence of passengers