He highlighted a recent incident where a suspected Ah Long recorded his act of fire-bombing a victim's home here.

"I don't think they are just Ah Longs, but extortionists who target innocent family members who have nothing to do with borrowing money," he said at a press conference in Wisma MCA on Friday (Jan 3).

In the incident, Chong said the victim, Lau Tien Sung, 55, from Jinjang, Kuala Lumpur, was shocked when he received a call from his 81-year-old father at about 5pm on Monday (Dec 30) informing him that an unknown individual had thrown a petrol bomb into his home.

He said Lau lodged a police report over the incident the same day.

"However, Lau received a WhatsApp call on Thursday (Jan 2) from a man calling himself Henry, demanding that he settle a RM45,000 loan his younger brother allegedly took.

"The man even admitted that he was the one who threw the petrol bomb as a warning that Lau's family would be hurt if he failed to settle the loan," he added.

Chong said he had taken up the matter with the Sentul police including Bukit Aman's Anti-Vice, Gambling and Secret Societies Division (D7).

"I believe they are not just Ah Longs but extortionists who are willing to go to the extreme and kill.

"I urge the police to investigate the case as attempted murder as the act could have resulted in death," he added.

In a separate case, Chong said a suspected Ah Long had thrown pig heads at the home and company premises of a 34-year-old woman in Kapar, Selangor on Thursday (Jan 2).

The act was over an alleged RM200,000 loan that the woman's brother-in-law had failed to settle.

Lau and Lee, who were present at the press conference, denied taking any loans from the loan sharks.

Lau said his family decided to come forward to disown his younger brother, while Lee said she decided to seek help due to fear over her safety.

Meanwhile, Chong advised those seeking loans to do so through registered licensed money-lenders.

"Don't resort to taking loans offered through WhatsApp or online from unknown persons," he said.

He added that loan sharks would usually offer very low loan repayments terms to entice people to take loans with them. 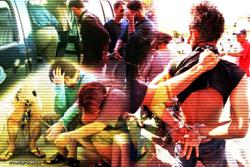