Unpleasant task: Firemen working on extricating the body of the pregnant woman.

PETALING JAYA: A pregnant woman was crushed to death while three other men who rushed to rescue her died from electric shock following a construction site accident in Sungai Buloh.

“We immediately dispatched a fire engine with seven officers to the scene at Kampung Matang Pagar.

“The 29-year-old pregnant woman was hit when a staircase at a construction site collapsed,” he said yesterday.

He said three other men rushed to her aid but they also ended up as victims.

“They were electrocuted as electric current was still flowing following the collapse.

“All four victims died at the scene,” he said, adding that his personnel managed to extricate the body of the woman and removed the three other bodies.

He added that the bodies of the four victims have been sent to the Sungai Buloh Hospital for post-mortems. 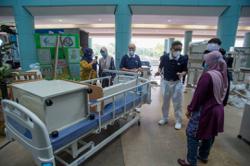