KLANG: The Department of Environment (DoE) aims to shut down 100 illegal plastic recycling factories by the end of March this year.

Energy, Science, Technology, Environment and Climate Change Minister Yeo Bee Yin said the target date was given as the nation is still plagued by plastic waste that was brought in before the July 2018 freeze on plastic waste imports came into force.

"We have shut down all illegal plastic recycling factories reported in Selangor. We are aware there are many more and we will continue to shut down illegal factories nationwide," she said.

Yeo said they have detected 97 illegal factories nationwide – 61 in Selangor, 10 in Kedah, 10 in Negeri Sembilan and six in Johor.

On complaints of illegal factories resuming operations despite being shut down, Yeo said Tenaga Nasional Bhd would cut off their electricity supply.

"On those that use generators, we will continue taking action but we require the help of locals to report these activities to us," she said.

Yeo said the government would also conduct checks on licensed plastic recycling factories to ensure they comply with the Environmental Quality Act 1974.

Out of the 48 legal plastic recycling factories in Selangor, 20 were found to be polluting the environment and have been shut down, she said.

"Should any legal plastic recycling factories be found guilty of violating regulations in the Environmental Quality Act concerning air regulation, effluents, and the like, they are liable to be brought to court and fined, with the possibility of their operations being closed down," Yeo said.

She added that the ministry has opened 36 investigation papers into the operators of the illegal factories and will ensure that these do not shift to other locations.

Yeo made the announcement during a joint-raid of an illegal plastic recycling factory in Telok Gong together with Pelabuhan Klang assemblyman Azmizam Zaman Huri, Department of Environment and Klang Municipal Council on Thursday (Jan 17).

On Tuesday, Housing and Local Government Minister Zuraida Kamaruddin revealed that only 19 out of 114 plastic waste AP (approved permit) holders currently pass requirements to import plastic scrap into the country. 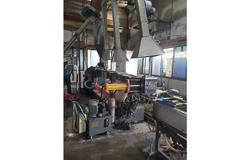