4.55pm: Volunteers moving in groups with big plastic bags to pick up rubbish as the crowd disperse.

4.50pm: Emcee led the crowd in a prayer recital (baca doa) and the crowd started dispersing right after that. Rain getting heavier. Emcee thanked those present at the rally.

4.45pm: People are leaving in droves towards Jalan Sultan Hishamuddin and the National Mosque. 4.26pm: PAS president Datuk Seri Hadi Awang called on stage to deliver his speech amidst frenzied cheers from the crowd.

4.05pm: Umno deputy president Datuk Seri Mohamad Hasan addresses the crowd. He say: "let there not be any misunderstanding between the nation's two largest Malay Muslim party Umno and PAS. He said the two parties must cooperate to defend race and religion."

4.03pm: A speaker tells the crowd that they will be speeding things up as dark clouds loom above Dataran Merdeka.

4.01pm: Protesters leaving in droves from Dataran Merdeka and heading towards Sogo. 3.53pm: Umno supreme council member Datuk Seri Tajuddin Abdul Rahman is addressing the crowd. He said: "We won’t topple the government  undemocratically. We will rise up during the next general election. If the government does not listen to our demands, we will organise a larger one."

3.35pm: More rally goers are seen moving away from Dataran Merdeka and making their way past the National Textile Museum.

2.56pm: Some participants turning back to Sogo after they can’t get through to Dataran Merdeka due to the human gridlock on Jalan Raja.

2.30pm: Several women participants fainted at the rally and were carried out in stretchers by medical personnel. 2.16pm: Najib arrives at the rally accompanied by a large crowd amid cries of support by rally goers. 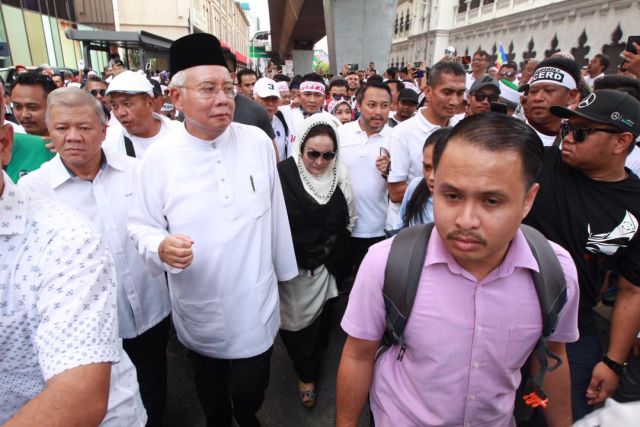 2.06pm: The crowd at Dataran Merdeka singing the national anthem Negaraku to mark the start of the event.

2pm: PAS deputy president Datuk Tuan Ibrahim Tuan Man was called by the emcee to go on stage to be seated together with several other leaders and NGOs representatives.

1.50pm: Crowd filled to the brim at Jalan Raja in front of Dataran Merdeka. Chants of "tolak Icerd" and "Hancur Icerd" quite prevalent. Sogo crowd are gearing up to march towards Dataran Merdeka. They are singing and chanting. 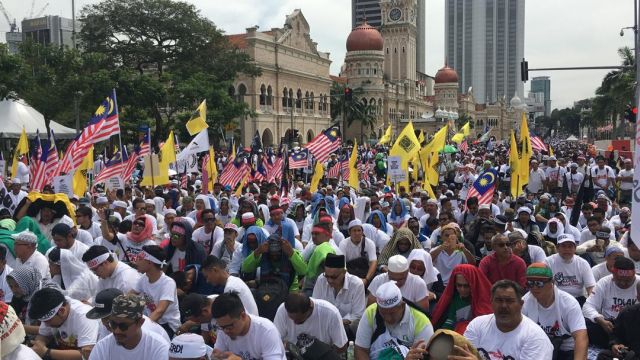 1.35pm: The mass solat hajat at Dataran Merdeka has ended and the crowd has been told to remain seated.

1.05pm: Crowd continue to gather at Masjid Jamek along Jalan Tun Perak. Traders can be seen taking advantage of the rally and have set up makeshift stalls selling t-shirts and masks.

1.03pm: The crowd at Dataran Merdeka is preparing for mass Zohor prayers. 1pm: A large crowd has gathered outside Sogo shopping complex. The group which began gathering since morning chanted anti-Icerd slogans and waved flags while waiting to march to Dataran Merdeka at 2pm for the rally. Ustaz Azhar Idrus was also spotted among the crowd here. 12.53pm: Crowd allowed to go into Dataran Merdeka, which was barricaded earlier.

12.16pm: A large crowd has gathered at Masjid Jamek MRT station, ahead of anti-Icerd's rally at 2pm.

11.30am: Several passengers, dressed in white T-shirts, taking the MRT to Kuala Lumpur were seen chanting “Bantah Icerd”. The group was also singing Negaraku and chanting “Hidup Islam” in the train. 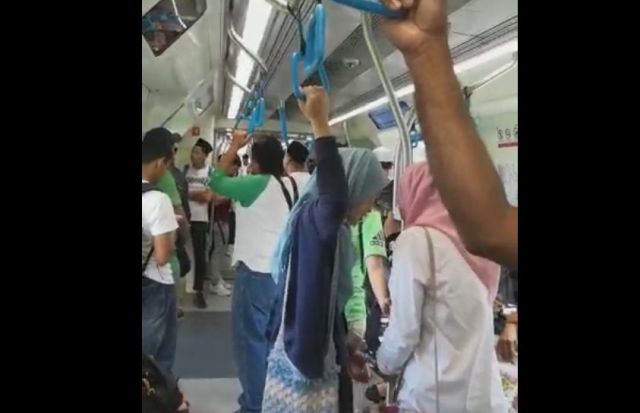 11.25am: A fire engine is parked in front the Kuala Lumpur City Gallery in Jalan Raja near Dataran Merdeka. 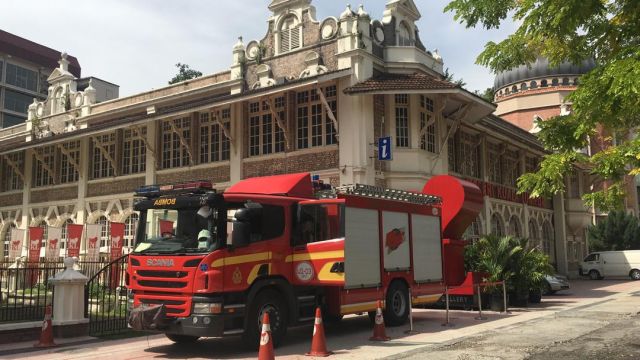 10.30am: Members of a silat group march to Istana Negara, reports Malaysiakini. They recite the 'selawat' (poem to praise Prophet Muhammad).

10.15am: Crowd gathers in front of the Islamic Arts Museum near Masjid Negara.

KUALA LUMPUR: A crowd is building up at Dataran Merdeka as of 11.30am on Saturday (Dec 8).

Anti-Icerd (International Convention on the Elimination of All Forms of Racial Discrimination) rally participants, mostly clad in white T-shirts with the 'anti-Icerd' printed in front, were seen bustling to Jalan Raja as police have blocked the adjacent roads along Jalan Hishammuddin and Jalan Tun Perak to motorists.

The stage for speeches by rally leaders and organisers have also been set up at Jalan Raja.

Many businesses forced to close for the day

Only anti-Icerd rally on today