PETALING JAYA: Fugitive businessman Low Taek Jho, better known as Jho Low, had been “island hopping” from the most remote to the most exotic in the eastern part of Indonesia on his superyacht, Equanimity, before it was seized by the police in February.

A source said Low, who has been a subject of the 1Malaysia Development Bhd (1MDB) investigation, sailed through several islands between last October and February in an attempt to evade authorities.

The Cayman-registered yacht returned to the Tanjung Benoa port in Bali monthly for refuelling and restocking of food supplies.

At one point, it spent three days on the island, where Low ushered in 2018.

“For about four months, Low travelled to places like Maluku Islands, West Papua, Nusa Tenggara, Komodo Island and Lombok, spending his time in the sun,” said the source.

“Low, Equanimity and its crew sailed the Flores, Bali and Bandar Seas, anchoring near some of Indonesia’s exotic and remote islands, only to return to Bali for one or two days for fuel and food.”

The source added that after the yacht was seized on Feb 8, Low managed to escape the Bali police dragnet and flee to Macau. 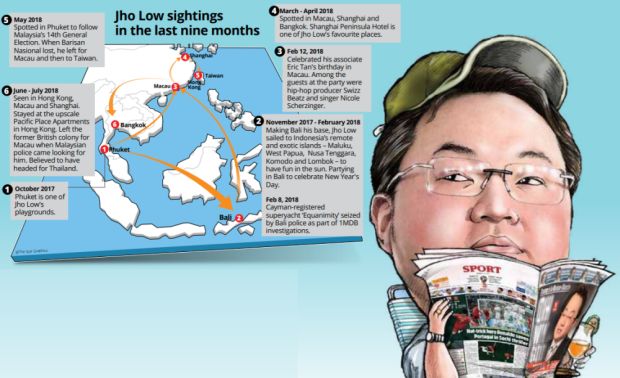 Four days later, he was spotted in a hotel there, celebrating the birthday of his trusted accomplice Eric Tan.

Tan, who has also been on the run since May 2016, is wanted in Malaysia and Singa­pore over the 1MDB investigation, touted as one of the world’s biggest financial scandals.

Among those who attended Tan’s birthday party were hip-hop producer Swizz Beatz and singer Nicole Scherzinger, according to a report in the Wall Street Journal.

The source said Low had lived in Macau, Shanghai and Bangkok between March and mid-April before being spotted in Phuket, from where he allegedly monitored Malaysia’s 14th General Election closely.

When Barisan Nasional lost, the source said Low left for Macau and Taiwan at the end of May, subsequently moving to live in Hong Kong but visiting Macau regularly.

Last week, he fled Hong Kong and headed to Macau after he got wind of the Malaysian police looking for him in the former British colony.

Inspector-General of Police Tan Sri Mohamad Fuzi Harun said yesterday that Bukit Aman had received an e-mail from the Macau authorities, informing them that Low had left the former Portuguese colony.

The source said Low left on a private jet.

According to the South China Morning Post, the flamboyant playboy had fled to mainland China.

However, the source said Low was headed for Thailand but was unable to confirm where exactly he landed.

“Low has a family house in Bangkok and has been seen in the capital city on many occasions. He could be in Thailand, but we don’t think he would go there now,” said the source.

Malaysia has applied for a Red Notice to seek assistance from countries such as the United Arab Emirates, Indonesia, India, Myanmar, China and Hong Kong via Interpol, and Taiwan via diplomatic channels to arrest Low.

The hunt for Low is now shifting to the West Indies islands.

“Low is a citizen of Saint Kitts and Nevis and has properties on Saint Kitts island. The authorities believe he is likely to head there to seek refuge as he has nowhere else to run to,” said the source.

Saint Kitts and Nevis, both made up of two islands, is a small nation in the West Indies. This region has been dubbed as one of the world’s most fabulous millionaire playgrounds and a party place for the wealthy.

“The doors for him to hide in many other countries across South-East Asia, China and the Middle East have been shut. Returning to Saint Kitts and Nevis, where he is a citizen, would be the best next option,” said the source.

“From there, he can hop to the many surrounding island countries, where law enforcement there is said to be lax.”

Malaysia does not have an extradition treaty with many of these island nations.

Last month, Low’s Malaysian passport was cancelled by the Immigration Department to restrict his movements as the authorities tried to track him down.

With a Saint Kitts and Nevis passport, a citizen can travel without visa to over 140 countries, including Canada, Britain and Europe.

The source said Saint Kitts and Nevis citizenship and passport could be easily obtained for a price.

It can be bought via a US$250,000 (RM1mil) cash donation to the country’s Sugar Industry Diversification Foundation or by buying real estate worth at least US$400,000 (RM1.6mil).