It’s in the timing

PETALING JAYA: Timing is everything if you want to increase your chances of getting pregnant, experts say.

Although there are many myths that purport to boost the likelihood of getting pregnant, doctors say none of them has much scientific backing.

Fertility specialist Dr Agilan Arjunan said couples need to be educated on the stages involved in a natural pregnancy.

“Some couples are not aware of their fertile period, in other words, the timing of their ovulation. This awareness can actually increase their chances of natural conception.

“People think that days 12 to 14 of a period cycle are when a woman ovulates, but it’s not true for everyone,” he said, adding that not all women have a 28-day menstrual cycle.

He advised women to chart the dates of their last three periods to get a better understanding of their own period cycles.

There are two parts of the menstrual cycle, explained Dr Agilan.

The first part is the follicular or proliferative phase where an egg grows until it is released during ovulation, and the second half being the secretory or luteal phase, which starts after ovulation has taken place. 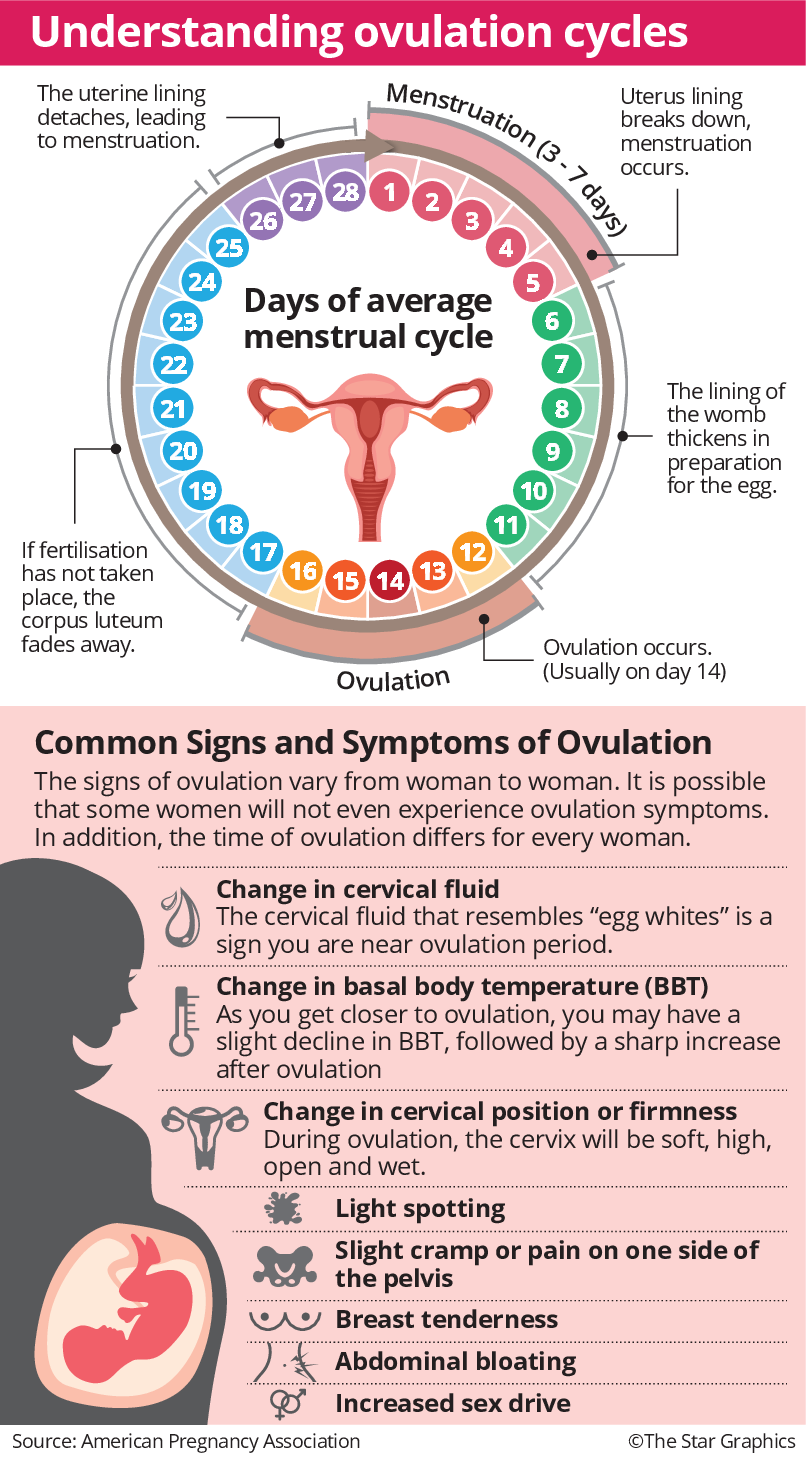 “The duration of the second part is fairly consistent. If you have your period today, you know that you ovulated two weeks ago.

“Some women have a short follicular phase, for example eight days, before they ovulate. Then they will have their period after about 14 days. So their whole menstrual cycle is only three weeks long,” he shared.

He said 80% of couples below the age of 35 would generally be able to conceive within a year.

“If a young couple is trying to get pregnant every month, and after about a year they’re still not pregnant, it’s best to go for a check-up,” he said.

However, Dr Agilan stressed that the one-year timeline is not applicable for everyone.

“For couples who know they have factors contributing to inferti­lity, they can’t wait for a year. I’d say they should go and get checked after six months.”

He also advised couples who are above the age of 35 to go and check with a doctor if they are not pregnant after six months, even if they have no known fertility issues.

“A lot of couples have the misconception that the moment they want to have a baby, they will get it just like that,” he said, snapping his fingers.

“A woman is fertile probably two or three days before ovulation, and around one day after, so it’s a window of about four to five days,” he said, adding that sperm can stay in a woman’s fallopian tube for about 48 to 72 hours.

An ovulation predictor test or kit could be used to measure the level of luteinizing hormone (LH) in one’s urine, which surges 48 hours before ovulation, said Dr Wong.

Other physical signs can also indicate that a woman is ovulating.

According to Dr Wong, vaginal discharge that is slippery and thin, almost like egg-white, is a sign that a woman is at the peak of her fertility for that month.

“Some women may also even experience their eggs being released. That’s called Mittelschmerz pain, but this doesn’t happen to every woman.

“Some may also feel a bit bloated or their breasts are a bit tender,” he explained.

“Soon after ovulation, hormonal changes occur, and as a result, the body basal temperature rises by 0.5°.

“If a woman is consistently charting her body basal temperature, she can more or less know when she ovulates,” said Dr Wong.

Dr Wong said it is harder to track down the ovulation period for those with irregular menstrual cycles, and as such, it is better for the couple to seek a doctor’s opi­nion rather than keep trying by themselves.

“However, if it is too stressful to do all sorts of tests, then we’d advise the couple to have regular intercourse, at least two or three times a week.

“If they’re quite active, or newly married and young, then we’d just advise them to do that rather than doing too many things which make the process unnatural and overmedicalised,” he said.

He also advised couples to start a family early as age is a factor in determining one’s fertility.

“Every woman is born with a finite number of eggs,” he said, adding that conversely, new sperm is being produced in a man up until the age of 55.