IPOH: Activist and graphic designer Fahmi Reza (pic) has been sentenced to one month's jail and fined RM30,000 for posting a caricature of a national leader on social media.

Fahmi, 40, whose full name is Mohd Fahmi Reza Mohd Zarin, was found guilty by the Sessions Court here Tuesday (Feb 20) of uploading an edited image of the Prime Minister on Facebook with the intention to offend.

Judge Norashima Khalid also ordered the accused to be jailed an additional six months if he fails to pay the fine.

However, she allowed the sentence to be postponed while waiting for the case to be appealed at the High Court.

On Jan 4, Norashima had instructed Mohd Fahmi to enter his defence after the prosecution proved a prima facie case against him.

Fahmi claimed trial in June 2016 to two criminal charges involving the uploading of the image. 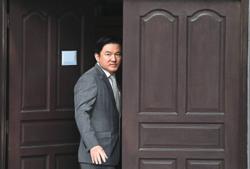