Our products are suitable for all, say employees

GEORGE TOWN: Employees of a local “durian white coffee” manu­facturer have vouched for the safety of their products, after five people were admitted to hospital for allegedly consuming the beve­rage.

Some of the workers, who declined to be named, told reporters that the company complies with the necessary health and food safety requirements, having received ISO22000:2005, HACCP (Hazard Analysis for Critical Control Point) and GMP (Good Manufacturing Practice) certifications.

“Our board members and staff are confident that our products, including the coffee, are suitable for all,” one of them said when met at the company’s showroom and retail shop here yesterday.

“No one has turned up to complain about the product. We only got to know about the incident via social media.” 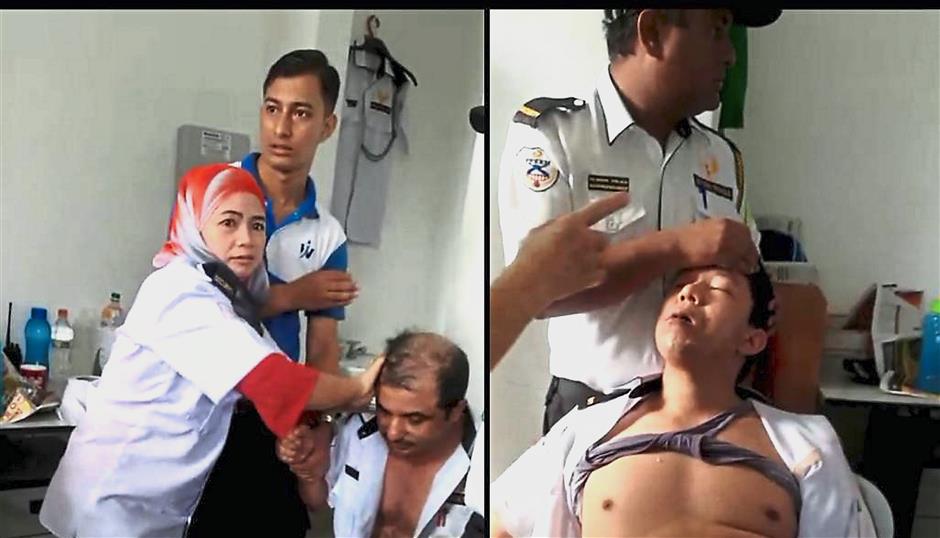 Unfortunate incident: A screenshot of the video showing security guards Bishnu Shrestha (right) and Sapkota Mangal Prasad being helped by their friends (from left) Hasmah, Chandra Khadka and Budhathoki Bhakta Bahadur during the incident at a condominium in Pulau Tikus.

A check at several supermarkets revealed that the instant coffee mixture had since been removed from shelves pending a report from the state Health Department.

Sunshine Wholesale Mart Sdn Bhd general manager Yee Kam Ming said it has removed the product from all six of its supermarkets in Penang, but other items under the brand are still available.

A worker from Gama Super­market and Department Store here also said the product has been withdrawn from its shelves.

“Customers who bought from us can return them in exchange for other grocery items,” he added.

Meanwhile, Penang police chief Comm Datuk A. Thaiveegan said no police report has been received over the incident so far.

Four people, including two security guards, were admitted to the Penang Hospital with severe fatigue after they allegedly drank the same “durian white coffee” beverage.

A video clip and photographs of the security guards went viral after being circulated on social media on Tuesday.

Hasmah Saini, 43, a security guard who works opposite the condominium where the incident happened, claimed the duo from Nepal became unwell shortly after drinking the coffee that day.

“They got the coffee from someone else and gave me two sachets before they made a cup for themselves.

“One of them later came over and told me not to drink it as he felt dizzy and drunk after taking it.

“Another became hysterical and fainted in our guard room. Everything happened very fast,” said the local woman when met at the apartment block in Pulau Tikus.