PETALING JAYA: The Malaysian Employers Federation (MEF) believes that more people will get the axe this year due to the current economic challenges.

Apart from the weak economy, contributing factors include the introduction of “disruptive technology” in some industries, it said.

“I think slightly more workers will be retrenched this year,” he told a press conference after the Taxation and Employer seminar jointly hosted by the Inland Revenue Board and MEF yesterday.

Shamsuddin said in 2015, about 44,000 workers lost their jobs while up to September last year, about 40,000 workers were retrenched.

He said the complete data for 2016 has not been released by authorities yet, but the numbers could be higher than the previous year.

In 2015, said Shamsuddin, about 18,000 of those who lost their jobs were from the banking sector due to the introduction of what he termed as “disruptive technology”, where banks were increasingly adopting online transactions, for example.

Other industries that could be affected, said Shamsuddin, include insurance, manufacturing and construction.

He said for the insurance industry, many prefer dealing with the companies directly for their services, which makes the job of middlemen or agents, redundant.

“However, these agents are not really part of the retrenchment rate because they are considered to be self-employed,” he said.

Asked to comment on the E-kad (enforcement card) programme by the Immigration Department, Shamsuddin said the Government should consider widening the criteria.

He said the programme should be open to illegal workers who do not have permanent employers.

Currently, only illegal foreign workers with valid employers can register and legalise their work under the E-kad programme.

Shamsuddin said by including illegal foreign workers without employers, the source pool for workers can be widened. 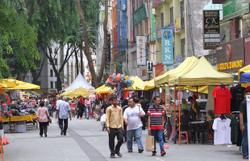