PETALING JAYA: It all started with a barred handphone line, but a quick call to check with his service provider revealed something much more sinister – identity theft and credit card fraud.

IT manager Pang, 44, was out for a jog on Aug 16 last year when he realised that there was no service on his work phone.

After two hours without any change in status, Pang called his service provider to check.

But to his surprise, the agent told him that the records showed that Pang had changed his SIM card at the provider’s outlet at eCurve that afternoon.

He was informed that someone using his details via a temporary IC had initiated the change.

“I tried to figure out why would anyone want my number. Then I remembered a credit card that I had yet to receive,” said Pang.

His fears were confirmed when his checks showed that not only had the credit card been delivered, but it was also activated via SMS, before seven transactions were made.

The total transactions amounted to RM26,428 and all were made that day.

A police report was made at the Damansara station the following day and the bank nullified the seven transactions after Pang showed proof, including CCTV footage of the thieves when they used his card.

Pang had listed his office in KL Sentral as his mailing address, so he was unsure as to when or where his card could have been collected without his knowledge.

After investigating, Pang found that his identity was used to buy six lines and broadband service from the telco on Aug 14 and 15 from its outlet in Berjaya Times Square, using the same tactics as the previous incident.

Pang suspected that the same identity thieves were involved.

Another police report was made, as Pang wanted to protect himself from any potential crime committed using his name. The police and the bank were investigating both cases.

Pang’s story was brought to light by MCA Public Service and Com­plaints Department head Datuk Seri Mic­hael Chong, who revealed that he received 11 similar complaints last year, with losses amounting to over RM140,000. 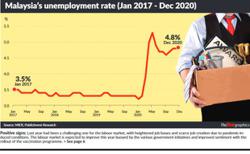