PETALING JAYA: Investigation will be immediate launched on the Malaysian Airlines aircraft, which was shot down in Russia, tweeted Prime Minister Datuk Seri Najib Razak on Friday.

"I am shocked by reports that an MH plane crashed.

“We are launching an immediate investigation," he tweeted minutes after the news was confirmed. 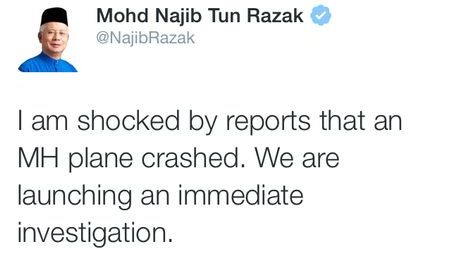 The KL bound Boeing 777 which was from Amsterdam, was reported to have crashed in Ukraine near the Russian border.

There were a total 280 passengers and 15 crewmembers on board and the Ukranian Interior Minister earlier announced that 295 people were believed to be dead.

Reports said that it crashed in a conflicted area near Donetsk and it would be complicated to get to the crash.

MAS sources said the plane did not enter the Russian airspace.

Sources said the plane was "shot down" while it was cruising at an altitude of 30,000ft.