The Klang Convent school is also a historical institution which is not utilised commercially.

THE Infant Jesus Sisters (IJS), who are the owners of the country’s convent schools, have appealed for a review of the need for quit rent on some of their school buildings as they are not utilised commercially.

Sister Theresa Chua, who heads IJS Malaysia, says the quit rent for some of the school buildings are exorbitant.

“There are no commercial gains whatsoever, but we have to send appeal after appeal for the rate to be reduced.

“Why can’t this be a standard policy with the Education Ministry (MOE) sending a directive to the Land Office to get this done,’’ she asks.

Sister Theresa says many people assume that the Sisters own many properties in prime areas with high commercial value if sold.

“All the existing convent schools are used by the government. Selling may not even be an option as requesting the return of convent schools from the government takes at least five years or more of negotiations, besides justifying the reason for the school to be retur-ned although the property belongs to the Sisters,’’ she says.

There are currently 56 convent schools comprising 34 primary and 22 secondary schools. In 2016, the IJS had already requested the return of its 170-year-old Convent Light Street (CLS) from the MOE with the intention for the school building to continue as an educational institution for all children of Malaysia.

The new school would be coed and placed under a private operator. The IJS made the decision to ask for CLS to be returned following declining enrolment in the past decade and escalating upkeep costs of the heritage building.

Sister Theresa says the Sisters have no properties to sell, except for one in Cheras, Kuala Lumpur, which is home to elderly Sisters.

“They will have no place to live if they sell their home in Cheras to pay for repairs to the schools. The Sisters have no income and we need to cope with ageing and retired Sisters,’’ she adds.

Sister Theresa appeals to the MOE to hear their concerns and to appoint special officers who understand the issues of convent schools, similar to those appointed to deal with Chinese and Tamil vernacular schools. 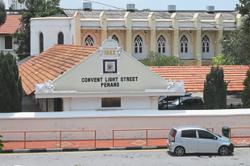