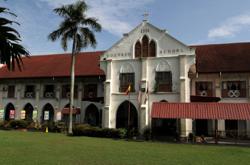 Storied school: Convent Light Street was set up in 1852, the first IJS convent school in the country. Many of these highly regarded mission schools were built over 100 years ago. — LIM BENG TATT/The Star

THE 56 convent schools nationwide, which are run by the Infant Jesus Sisters (IJS), are in desperate need of financial support with at least 90% of the school buildings in dilapidated conditions in the absence of sufficient maintenance funds.

Many of these highly regarded convent schools were built over 100 years ago, with the first IJS school as well as orphanage set up in Light Street, George Town, in 1852.

At least two schools caught fire recently as they had to cope with roof leaks, wiring and plumbing issues, and even floods.

In a rare interview, Sister Mary Theresa Chua, the Provincial of the IJS – which is legally known as the Lady Superior of the Society of Saint Maur – says the estimated RM3mil annual grants from the Education Ministry (MOE) for all 56 schools would only be enough for basic maintenance, working out to around “RM50,000 to RM70,000 for each school’’.

“The buildings are very old and daily use, with minimal repairs, has taken a toll. In short, the yearly government allocation is barely enough to cover repairs and maintenance costs as we always must rely on donors and carry out fund-raising initiatives,’’ she says.

ALSO READ: Review the quit rent of some convent schools Sister Theresa: ‘The yearly government allocation is barely enough to cover repairs and maintenance costs and the schools have to rely on donors and raise funds themselves.’

For example, she points out how the authorities have yet to carry out repair work on the slope bordering the 123-year-old Convent Bukit Nanas after a landslip in February this year. The site borders the Kuala Lumpur Forest Eco Park, and Sister Theresa fears that the ongoing wet spell and the year-end rainy season would be a problem.

In 2020, a landslip also hit the school, which was established in 1899, after heavy rain caused a near collapse of a retaining wall.

Sister Theresa describes the plight of convent schools in Malaysia, which have produced hundreds of thousands of students including prominent figures, as desperate.

“We are in dire straits. We have no one to turn to and we pray that our problems, especially involving the safety of our students and teachers, will be heard,’’ she says.

Sister Theresa explains insurance premiums are not covered by the government and “when any unfortunate incident happens, the Sisters are left to handle and manage them”.

“Often, the Sisters have no means to make proper major repairs as evidenced in the latest Convent Bukit Nanas landslip.

“What makes no sense is that the landslip was due to the Forestry Department felling trees and cutting through the hillslope, thus loosening the soil and affecting water flow resulting in the clogging and retention of mud, which in turn blocks drains so that water is not able to flow,’’ she adds.

Sister Theresa says there is an urgent need for the MOE to meet Mission school authorities to talk about critical building issues, such as, for example, electrical appliances like airconditioners, computers and projectors that have led to capacity overload.

“We are in a dilemma. Most of these schools are over 100 years old and cannot cater for high voltage use.

“However, digital equipment is necessary in the current era and environment for teaching purposes,” she notes. 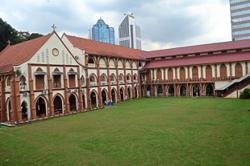