We shouldn't have to put up with the haze

THE acrid smell of smoke hangs in the air as I write this, permeating even indoors.

Outside, Kuching city is blanketed in a dirty white pall of haze which obscures familiar views and landmarks.

The air pollutant index (API) climbed to unhealthy levels in Kuching and other parts of Sarawak on Friday (Sept 6), reaching 169 in the state capital at 10pm. In Sri Aman, a town close to the Sarawak-Kalimantan border, the API nudged ever closer to the very unhealthy level of 200 as the night wore on.

She said the Asean Specialised Meteorological Centre (ASMC) reported that 1,393 hotspots were detected in Indonesia on Thursday (Sept 5) - 306 in Sumatra and 1,087 in Kalimantan.

By Friday morning, according to a Reuters news report, Indonesian disaster officials had detected over 6,000 hotspots in Kalimantan. A spokesman was quoted as saying that the number had risen from 2,694 a day earlier as many were previously obscured by smoke.

In a situation update on Friday, the ASMC observed "moderate to dense" haze over large parts of south, central and west Kalimantan, some of which was blown by prevailing winds towards western Sarawak. More worryingly, it said the hotspot activities and hazy conditions in Sumatra and Kalimantan were likely to persist in the current dry spell.

The thing is, this is a problem that has gone on for years now. We suffer from the haze to a greater or lesser extent on an annual basis, even after hearing the same promises for action and cooperation to tackle it year after year.

This time, Malaysia will send a diplomatic note to Indonesia demanding immediate action to put out its fires and prevent them from recurring. Isnaraissah said her ministry was in the final stages of drafting the note and would send it as soon as possible.

She also said Malaysia, Brunei, Indonesia, Singapore and Thailand, in a meeting of the sub-regional ministerial steering committee on transboundary haze pollution on Aug 6, pledged to step up preventive steps and cooperation to tackle haze.

"Hopefully, with our action of sending the diplomatic note and cooperation from all countries involved, the situation can be alleviated," she said.

We can only hope that this sentiment is not misplaced, but previous experience and the annual recurrence of the haze have left many of us wondering whether the outcome will be different this time.

What we want is a permanent solution to the haze, one which will bring an end to it once and for all.

Why should we have to put up with it every time the dry season comes around? As ordinary citizens, there's not much we can do to prevent large-scale burning across the border.

And so we hope to see the government do more, especially at Asean level, not only in making pledges but in implementing effective measures to resolve this problem.

Sending a diplomatic note is a start, but it's also time for the commitment and cooperation pledged at last month's meeting to be translated into serious action with tangible, lasting results. 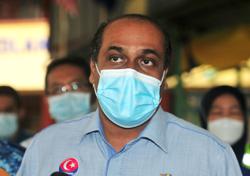