(Third from right) Amirudin and others visiting the site to see the cause of the odour pollution themselves. - LOW LAY PHON/The Star

THE Selangor land and mines office (PTG) is in the process of confiscating over 8ha of land in Bukit Serdang in Seri Kembangan that was formerly used as an illegal dumping ground.

The effort was to solve the odour pollution caused by leachate from the rubbish that was ending up at the Taman Puncak Jalil retention pond, emitting a bad smell to thousands of residents.

Selangor Mentri Besar Datuk Seri Amirudin Shari said Petaling PTG were in the midst of preparing the paperwork to confiscate the land, which was privately owned by 15 individuals.

He said the Petaling PTG would call all the landowners to seek their permission to allow the agencies involved in the cleaning works to enter the site by the end of the week.

“If the landowners refuse to cooperate, we will encourage the residents to file a suit against them for causing odour pollution and nuisance for millions of ringgit.

“Regardless, Worldwide Holdings, a state subsidiary, would be appointed to do the treatment at the site, and we will summon the land owners.

"The treatment would cost the state between RM1mil and RM3mil, and take up to three months to complete,” Amirudin said during a visit to the site.

In the meantime, Amirudin said MBSJ would build a bund to block leachate from flowing out from the site tomorrow. 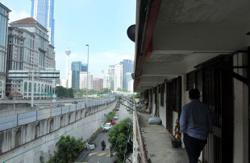