THE Selayang Municipal Council (MPS) is on high alert for flash floods and is paying special attention to slope erosion during the north-east monsoon.

Its deputy president Cheremi Tarman said measures to prevent and minimise flash flooding had been completed earlier this year, allowing MPS to focus on slope upgrading works in 10 locations since January.

“We started preparing earlier after learning from the previous year’s flood experience and we are better prepared now.

“However, we are concerned about slope erosion and landslides, so in addition to upgrading works, our engineering team has been monitoring critical areas,” he said.

He added that work at four more sites were 50% complete and in progress due to land-related matters.

He told StarMetro that other early preparations included addressing problems at flood-prone areas identified by Selangor Irrigation and Drainage Department in September.

“Our equipment and assets are ready and MPS staff are on 24-hour alert. Our rapid response squad is also ready to go at a moment’s notice.

“If there are emergencies, we can react immediately to what is happening on the ground,” said Cheremi. 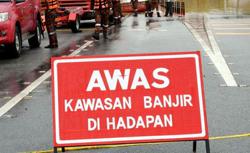