Extensions of ground floor units in low-cost flats, such as this one in Pandan Indah, Ampang Jaya, have become common due to the need for space in these typically small units. – Photos: SS KANESAN & SHAARI CHE MAT/The Star

MANY homeowners are not aware that failure to obtain the local authority’s approval to carry out home modification can spell disaster when they plan to sell their property later.

As unapproved renovations are not documented, the value of the property can be lower than the price quoted by them because the additional structures and facilities are not in the original building plan.

If the documents are in order, the value of the property can be enhanced.

Banks and financial institutions also request for documents including a certificate of completion (CCC) when granting a housing loan, while insurance claims can also be affected if renovation works are carried out without approval.

This rule is provided for under the Street, Drainage and Building Act 1974.

Ampang Jaya Municipal Council (MPAJ) Buildings and Architecture Department director Ahmad Alhairi Mohamed Yusuf said when any changes were made to the original building, homeowners must have council approval before they could carry out the works.

“Most times, property owners will just carry out the works by engaging a contractor as they think it is just a minor modification. Many low-cost flats’ residents tend to extend their units illegally and have to pay for their transgression when the local authority demolishes it like this one in Ampang.

“But when it comes to selling or transferring ownership of the property, they can run into problems as all building works including renovation and extension need a CCC,” he said.

He added that property valuation could also be affected without the approval.

Some of the most common home renovations are kitchen extension, additional or merging of rooms, and adding another floor such as from single to double-storey or more.

In a bid to tackle the issue of illegal extensions and renovations, MPAJ is undergoing a year-long exercise to help homeowners obtain permit for work carried out.

“The legalisation programme has various benefits besides ensuring that all construction is approved by MPAJ.

“It will help homeowners to obtain their CCC as well as easing the buying and selling process, insurance claims and others,” said Ahmad Alhairi.

The programme, however, is open only to those living in landed properties and are subject to MPAJ’s building regulations and guidelines.

“However, we allow some accommodation to the guidelines, but owners will have to discuss the matter with us,” he said.

Under the programme, homeowners can gain retrospective approval for modifications within their property boundary.

Ahmad Alhairi said that over 70 property owners had so far filed applications under the programme.

Homeowners in stratified residences like flats, apartments and condominiums are tied to the Street, Drainage and Building Act 1974 (Act 133) and Strata Management Act 2013 (Act 757), whereby the property owner’s space is confined to their lot only.

Several people whom StarMetro spoke to, said the situation had become rampant due to lack of enforcement.

When Mohd Ilya, 45, first noticed his ground floor neighbour extending their unit to cover part of the walkway a few years ago, no one complained.

“It has become normal for the downstairs residents to renovate their units.

“There is nothing much we can do about it as there is no active management here. The authorities also seem to close an eye because no one complained,” he told StarMetro.

He said when he first moved into the low-cost apartment block in Ampang Jaya, also known as Pangsapuri 610, some 15 years ago, it was still in good condition.

“At the time there were one or two who had done it, but not like it is today where almost all the downstairs units have been renovated.”

Mohd Ilya said the main reason for the illegal extension was because the units were small at either 500sq metres or 800sq m.

“One unit could have about four to six members of a family, so extra space is needed,” he added.

A resident who had done some extension to her flat, said there was not enough bedrooms for the five people in her household and they could not afford to move out.

“I don’t think we are causing a problem as we are not ‘blocking’ anyone,” said the resident identified only as Jaya.

In May, an enforcement action by MPAJ on a partially-built illegal extension was widely praised, but many noted there was no action on completed extensions.

Following the demolition of the extension at a ground floor unit at Flat PKNS AU3 in Taman Keramat, MPAJ said 62 notices were issued to other owners to remove all illegal extensions at their premises. 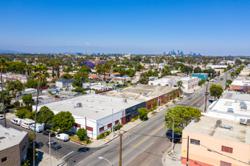