DBKL to give manual workers priority in rented council units 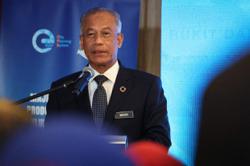 Kuala Lumpur City Hall (DBKL) will be giving its manual workers priority to rent council homes in the city.

As they earned the lowest wages, DBKL Project Implementation and Building Maintenance Department director Norzaini Noordin said they would be given the chance to rent council units in Kuala Lumpur as some would not be able to buy a house in their lifetime.

“It is our way of helping our employees to live in a modern and comfortable home in the city,” she said.

She explained that many of DBKL’s workers were living in the outskirts of the city and had to travel by motorcycle in the early morning just to get to work on time.

“We want them to experience a better quality of life; one way of doing that is by giving them a chance to live comfortably and closer to their workplace,” Norzaini said at a ground-breaking ceremony of a DBKL council home in Sentul, Kuala Lumpur.

When asked if there was a time limit for their stay, Norzaini said DBKL would review their eligibility from time to time until the employee was able to afford renting or buying their own homes.

Meanwhile, Shahidan said the ministry and DBKL would be building 5,000 units of council homes in Kuala Lumpur to help poor government staff as well as eligible residents.

While priority would be given to DBKL staff, he said they might also consider allowing those from other government agencies to rent units there.

“This is not like the PPR (people’s housing project) and PA (public housing scheme).

“Council home units are 750sq ft and come with three bedrooms and two bathrooms,” he said.

He added that the rental would be affordable.

The Sentul council home will be built on 0.567ha land that previously housed 10 old semi-detached houses belonging to DBKL.

The 18-storey building will have 170 units, an eight-storey podium carpark, a multipurpose hall, badminton court and other facilities.