City folk visit the Ipoh Amusement Park at the Kinta Riverwalk for food and games. – Filepic

SAFETY measures need to be put in place at the amusement park area of Ipoh’s Kinta Riverwalk in Perak, say concerned city folk.

Stakeholders said that Ipoh City Council (MBI) should have fences put up by the riverbank and improve lighting to ensure the safety of visitors, especially children.

They are raising their concern following a May 8 video that showed a child riding a toy car falling into the river and having to be rescued.

Following the incident, the toy car rental service at the riverwalk was ordered to stop temporarily.

A visitor to the park, civil servant Khairul Izzat Jamaluddin said he would not allow his daughter to ride the toy cars at the amusement park due to the lack of safety measures. Khairul Izzat does not allow his daughter to ride the toy cars at the riverbank because there are no railings along the river.

“When we go to Kinta Riverwalk for dinner, my daughter will always ask to ride in the toy cars and I have to distract her attention away from it.

“I do not allow her on those rides because there are no railings here along the river,” he said.

Khairul, 33, said he usually took his daughter to another place with a similar toy car ride, where the area was larger and brighter.

Perak local government committee chairman Datuk Nolee Ashilin Mohammed Radzi was reported to have said that the state government would discuss with MBI the tightening of safety rules at Kinta Riverwalk.

She added that the area near the river was supposed to be off limits to toy cars.

Kinta Riverwalk reopened to the public in January this year after undergoing redevelopment.

Among the attractions there are two glow-in-the-dark bridges, an entertainment space for children, and shops selling arts and craft items as well as food.

A 33-year-old mother, who wished to be known only as Suzana, said the area was quite dark at night although there were some brightness from street lights. “Railings should be installed at the riverbanks, especially near the park, to prevent people from falling into the river,” she said.

Suzana and her husband regularly take their five-year-old daughter to the amusement park.

The public relations officer also hoped the toy cars would be sanitised regularly in view of the rising cases of hand, foot and mouth disease.

She suggested that MBI vet the types of entertainment being held at the amusement park.

“I believe this area is supposed to be for children.

“There are buskers singing at the restaurants here and that is fine.

“However, dance groups will sometimes perform at the park too and I have seen some noisy and provocative performances,” she added.

Mohd Rani Ariffin, 43, who managed the toy car rental operations at Kinta Riverwalk, hoped that he would be allowed to resume business soon. Mohd Rani hopes the city council will quickly instal fences along the river so he can restart his toy car rental services soon.

“We started operating in January and could get up to 500 customers a month.

“Depending on the type of toy cars rented, I charge between RM25 and RM45 per hour.

“After we were told to temporarily shut down our operations, fewer people are coming to Kinta Riverwalk.”

He said this also affected his restaurant business at the location.

“Most of the customers are families with children who want to ride the toy cars,” he added.

Mohd Rani said the operators spent a considerable sum to improve the visibility in the area.

“We installed our own lighting because the lights put up by the city council are not bright enough.

“Since the toy car service has stopped, we have switched off our lights at the site. Some visitors now think our restaurant is also closed, so they stay away.

“We hope that the city council will quickly brighten up the area and instal safety dividers or fences along the river so that our toy car rental services can resume,” he said. “We are waiting for the full investigation into the incident where the child fell into the river.

“We are also still determining the cost to put up fences at the riverbanks,” he said.

Rumaizi also said that RM200,000 had been allocated to instal more lights in the area.

“Other safety features will be added from time to time depending on the needs of visitors,” he said. 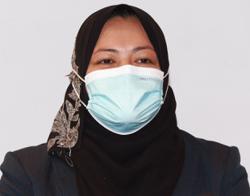