DESPITE tighter standard operating procedures (SOP) due to the pandemic, hundreds of devotees turned up to fulfil their vows and conduct prayers on Thaipusam day this year.

Devotees from as far as Selangor, Perak and Kedah came and waited for their turns at a designated barricade prepared by the management of the Arulmigu Sree Balathandayuthapani Hilltop Temple in Waterfall Road, Penang.

A check found that devotees, some carrying paal kudam (milk pots), made their way to the hilltop temple and Nattukotai Chettiar Temple from as early as 6am.

“The attendance of devotees since 6am today has been smooth and under control.

“Police are satisfied with the SOP compliance by the devotees, which includes proper physical distancing in the temple,” he said. 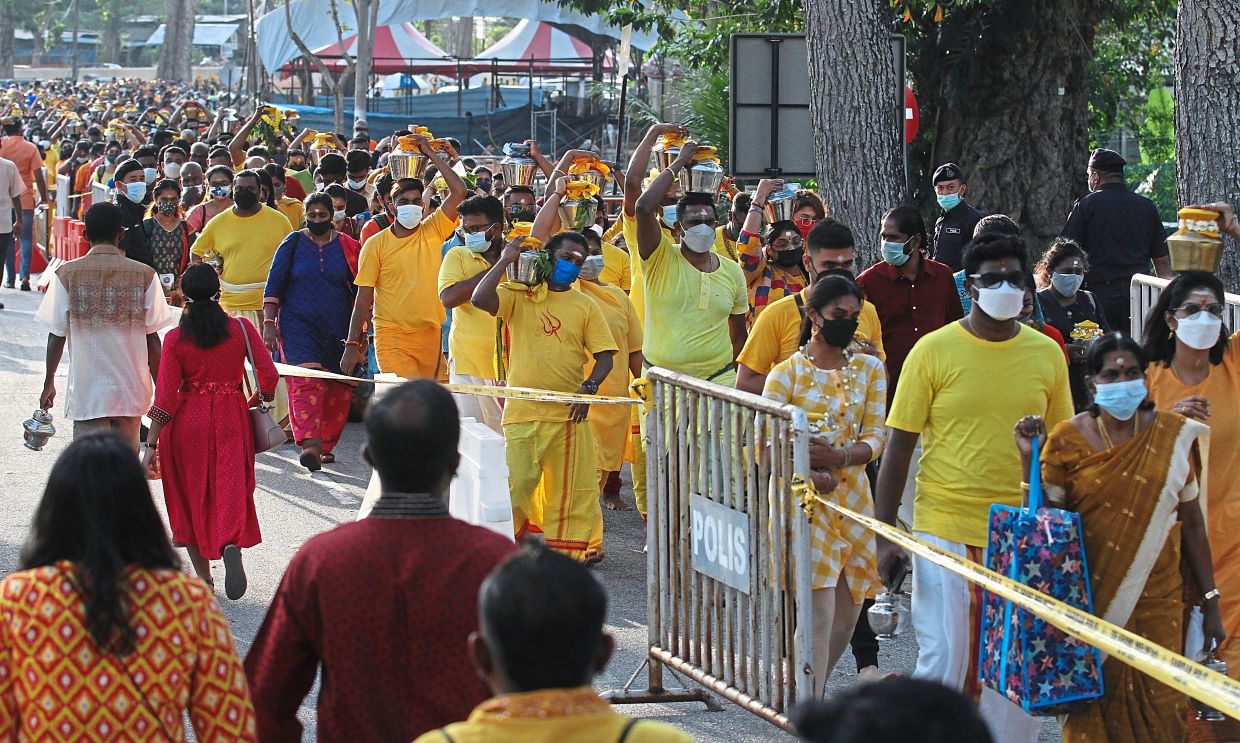 ACP Soffian said the monitoring was conducted by the police and they were also assisted by other agencies such as the National Unity Department, Health Ministry, local councils and the temple management.

“The Health Ministry was responsible for sanitising the temple compound every 30 minutes.

“We are satisfied with the situation and the devotees have been cooperating,” he said yesterday, adding that the temples operated until 11pm.

Arulmigu Sree Balathandayuthapani Hilltop Temple chairman Datuk R. Subramaniam said the temple was opened at 5am, adding that devotees fulfilling their vows and praying at the temple had been monitored by the police since Jan 16.

“The devotees were required to scan their MySejahtera and have their body temperature checked.

“After that, devotees have to wait before they are allowed to hike up to the pinnacle of the temple.

“Only 150 devotees were allowed to be at the temple at any one time.”

He thanked the police, health department as well as devotees who complied with the SOP.

Meanwhile, devotees expressed gratitude for being able to pray and fulfil their vows during this year’s celebration.

“I waited at the entrance of the hilltop temple from 6am and was only able to go up after three hours.”

Her friend N. Dhavamalar, 37, from Paya Terubong, said it was necessary for the authorities to implement the strict SOP to ensure public safety.

Chief Minister Chow Kon Yeow said although the Thaipusam celebration this year was held according to new norms, the spirit and excitement of the festival were still felt.

“On this significant day, the state calls on all Penangites to continue to appreciate the spirit of unity that has brought stability and development.

“The inclusive state government has provided various forms of assistance, infrastructure development and education for the Indian community in the state,” he said in a statement.