Sell old cars to scrap vendors instead of abandoning them, owners told 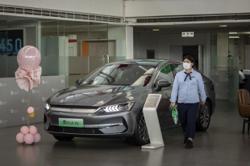 Decrepit cars at one of the council’s impound yards. — Filepic

WITH flat tyres, one side mirror missing, the front bumper half falling off and peeling paint on the hood, the old car was indeed a sad sight.

Its last journey very evidently far in the past, it was painfully obvious that whoever owned the vehicle was not coming back.

Abandoned cars anywhere quickly become an eyesore but on Penang island, the problem is becoming more than a blight on the aesthetic.

With the number of deserted cars rising almost every year since 2018, the Penang Island City Council (MBPP) is looking at different ways to stop drivers from ditching their decrepit cars in public places.

“These cars are of all different makes and models but every one of them is more than 10 years old, some a lot older,” Yew told The Star.

Only 79 cars were towed in 2020 but several factors may have contributed to this low number including the first movement control order where fewer people were out of their homes to notice abandoned vehicles and MBPP manpower was more concentrated on essential services and fighting the pandemic.

Yew added that economic factors, including the abolishment of GST in 2018 along with a reduction in interest rates for new car loans in the same time period, had contributed to a boom in new car sales from 2018 to 2019.

The purchase of a new car often results in the old being neglected.

“There are also not many places to store old cars and at times, owners are reluctant to sell them for sentimental reasons,” he said.

Eventually, these cars pose several problems for nearby residents and authorities.

First, Yew said, they took up valuable parking spaces and were eyesores for the community.

They often became breeding grounds for mosquitoes and sometimes attracted pests and animals.

After reports on suspected abandoned vehicles are lodged and MBPP places notices on the windscreens giving owners seven days to remove their cars, the local authority tows the automobiles away – incurring the council cost and manpower.

“We tow the cars to one of three depots on the island, located in Patani Road, Jalan Tanjung Tokong and Lebuh Relau, pending their disposal.

“The problem now is that with the number of cars we are removing, we are facing a shortage of space at our depots.”

Yew said the majority of reported deserted cars were found in residential areas while a few had been reported in more unusual places like mall car parks.

In one instance, a car with missing wheels propped up by bricks was found occupying a parking space along Karpal Singh Drive.

“When we checked, it had a valid road tax and was paying one-day parking rates of RM6.

“After more investigation, it was found that the vehicle was being used as a storage space for one of the stalls that sold goods at night. RM6 a day was cheaper than renting any other place to store their things,” Yew said.

Obviously, this violated the spirit of the law but legally, no action could be taken.

“Parking spaces in public places are not meant to be occupied for a long time. This is a loophole and we have been looking at ways to prevent things like this from happening so all drivers can have a chance at getting parking,” he added.

One such proposal is to introduce a new, incremental parking payment scheme where drivers pay more for every continuous hour they occupy a parking slot – an idea that MBPP is considering and will make a decision on sometime next year.

For now, Yew said the council was working with scrap metal vendors to help reduce incidents of abandoning vehicles.

“Since May, the council has been in contact with vendors who buy decrepit cars from owners.

“As a result, more than half the abandoned cars reported this year, 199 cars or 52%, did not have to be towed as the owners were put in touch with these vendors.

“Currently, we have the information of 11 vendors who buy old cars up on our social media pages.

“In the past, disposing old cars may have cost the owners money but now, people may actually make some money from selling their old cars instead of leaving them by the side of the road,” Yew said.