TEN months after a landslide occurred at Block B of the Sri Lempah flats in Kuala Lumpur, repairs on the eroded slope at the back of the flats have finally been completed to the relief of residents.

Following complaints to Kuala Lumpur City Hall (DBKL), the slope was finally repaired and had now been fully cemented.

“We are grateful to DBKL for listening to our plight and repairing the slope,” said Sri Lempah Management Corporation I chairman Chong Kam Cheng.

“It was a nerve-wrecking 10 months of constantly having to liaise with DBKL.

“This was amid the movement control order and challenges faced by the contractors to obtain approval from International Trade and Industry Ministry, but it was all worth the effort,” he said. 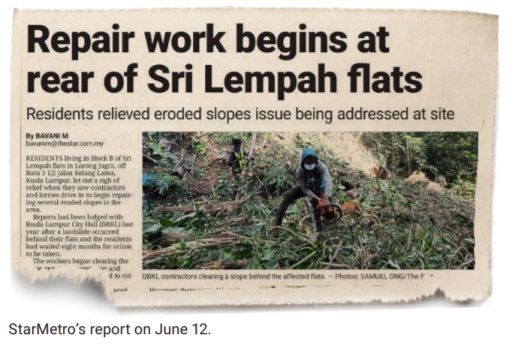 Remedial work started in June at the flats located in Lorong Jugra, off Jalan Kelang Lama, after the exposed slope with its remaining vegetation and trees was cleared.

After the clearing work was done, workers covered the slope with tarpaulin sheets to protect it from further erosion.

However, during the repair works, residents noticed that the drainage system at the foot of the slope was clogged, hence a request was made to DBKL to repair the drains as well.

“After the slope work was completed, we made a request to DBKL to repair the drainage system to avoid flash floods,” said Seputeh PKR chief S. Mahendran, who had been helping the management corporation liaise with DBKL on the matter.

“DBKL has already started work to repair the drains and it is expected to be completed by next week,’’ he said.

Due to the land being on private property, the issue of payment was a factor in the initial delay.

However, in view of the urgency of the situation and safety concerns, DBKL decided to carry out the work first.

Estimated cost of the repairs was about RM400,000, and residents would be billed for this with the cost included in their assessment bills.

“I advise residents to also promptly pay their apartment maintenance fees as the money will go towards upkeep of the area.

“This is a private property, so DBKL is not obligated to pay for repair works when something happens,” said Chong.

“We hope that residents can cooperate and start clearing their backlog (unpaid maintenance fees),’’ he added.