Injecting new use into old buildings 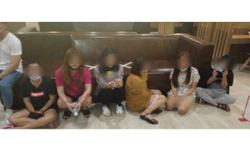 Plants and creepers growing on the facade of the Malaysian Industrial Court Building.

IT HAS been weeks since the historical giant clock at the Sultan Abdul Samad building in Jalan Raja, Kuala Lumpur stopped ticking.

Dubbed Malaysia’s own Big Ben, no one knows exactly when it stopped but this iconic symbol has been a silent witness to many memorable moments of the country’s history, including the Federation of Malaya’s independence from the British Empire on Aug 31, 1957 as well as the Japanese Occupation of Malaya in 1941.

The fact that the clock stopped working and its keepers being unable to carry out maintenance work during the pandemic shows the wider impact of the city’s battle against Covid-19.

Across the 124-year-old clock tower is a 100-year-old colonial building that used to house the Kuala Lumpur Music Museum before it was abruptly closed in 2017.

The charming looking structure which was home to the Natural History Museum for over a decade now has trees and shrubs growing on its rooftop.

The building’s unique cream bricks were a sight for sore eyes in the past as it embodied the romantic elements of a bygone era.

Built in 1919, it was the office of the Chartered Bank of India, Australia and China.

In December 1926, when Kuala Lumpur experienced devastating floods after the Klang River burst its banks, floodwaters gushed into the premises, rising steadily and forcing employees to move their work to the upper level which was the living quarters.

The current condition of the historical buildings do not only show the fragility of our heritage sites but that they too have been exacerbated by the pandemic as it results in stalled repairs and conservation works that are due to be carried out by the government this year.

Architect and heritage expert Datuk Hajeedar Abdul Majid said unless urgent action was taken to sustain and preserve these buildings, we would lose them to decay.

“The buildings are in a state of neglect and will only get worse the longer they are left abandoned.

“Heritage conservation may seem to be a lesser priority in the midst of the pandemic, but we should continue sustaining what is left of our heritage.”

He said there were already indications that the buildings were not in good condition, with parasitic plants growing on the facade and some of their roots penetrating into the brickwork.

Hajeedar, who is past president of the International Council on Monuments and Sites (Icomos) Malaysia, said heritage buildings in Kuala Lumpur could potentially be conserved through adaptive reuse.

He said buildings such as the old Supreme Court and FMS Survey Office could be repurposed as cultural hubs or boutique hotels.

“We can inject new use into these heritage buildings, especially since they are located in the historic core of the city.

“Together with Merdeka Square and the sites around it, this area can become the centre of information with touristic facilities and activities, besides regaining its social significance.”

He said private entities could be roped into these plans, with the government providing tax incentives for the restoration of heritage buildings.

“For example, a 100% tax exemption for the conservation of heritage buildings would encourage owners, which includes the government, to restore and revitalise such properties, ” he explained.

This proposal is one among several other suggestions that have been detailed in the Kuala Lumpur Heritage Agenda prepared by Icomos Malaysia.

The over 100-page document details the group’s review and recommendations on heritage policies within the Kuala Lumpur Draft Structure Plan 2040 and Kuala Lumpur City Plan 2020.

According to Hajeedar, who served as adviser for the review committee, the agenda was presented to Kuala Lumpur City Hall (DBKL) last year.

Meanwhile, a recent statement by Icomos Malaysia’s Kuala Lumpur Heritage Review Group highlighted its concern over the state of the once magnificent FMS Survey Office.

Stretched along Jalan Raja and Jalan Tun Perak, it noted that one of its dome structures now resembled a “squashed onion”.

“It is obvious that the base of its original pinnacle is collapsing within the dome. Hoarding has been put up between the arches on the ground floor.

“Water penetration is affecting the entire structure within.

“Structural movement caused by vibrations from the adjacent road traffic and LRT trains are among matters to be wary of.”

The group stated that the pinnacle of the particular dome was first seen tilting in late 2016, and so the top portion was hastily removed and sealed in 2017 as a safety measure.

“Four years have since passed. Unfortunately, due action is not as yet evident.

“Much has been said about the old FMS Survey Office by relevant organisations in the past.

“Still, it seems that nothing has been done to arrest this 110-year-old building’s state of decline.

“We look back at our legal papers and ponder, what good is an Act if no action is taken?, ” the group questioned.

“Section 42 of the National Heritage Act 2005 requires owners to ensure that their heritage site remains in a good state.

“If the owner is proven to neglect his listed property, the Heritage Commissioner may give him a two weeks’ notice of intention to carry out necessary repair works, with all costs and expenses reasonably incurred to be reimbursed by the owner.

“The situation for the FMS Survey Office however is not so straightforward as it is government property.”

The group added that the heritage building and public safety remained threatened by the fear of the dome collapsing on its own.

The review group is appealing to those responsible, either as custodian or owner, to immediately attend to the issue or risk losing the building.

However, all is not lost as Tourism, Arts and Culture Minister Datuk Seri Nancy Shukri has assured that the ministry is working on establishing a partnership with the private sector for the preservation and conservation of the city’s cultural heritage.

See StarMetro tomorrow for an exclusive interview on plans to revive the flagging fortunes of Kuala Lumpur’s tourist attractions. Plants and creepers growing on the facade of the Malaysian Industrial Court Building.

The main corridor of the former FMS Survey Office building is in poor condition.

The iconic clock tower which is part of the Sultan Abdul Samad Building at Jalan Raja is not ticking anymore.

The entrance to the former Kuala Lumpur Music Museum building is blocked by an overgrowth of plants and weeds.

With or without the pandemic, we should continue sustaining what is left of our heritage, says Hajeedar.

Known for its magnificent columns and domes, the former FMS Survey Office building is in dire need of repairs. — Photos: IZZRAFIQ ALIAS/The Star

Consider all aspects in applying to gazette buildings, owners told