The event was organised by the Environment and Water Ministry in collaboration with Malaysian Green Technology and Climate Change Centre (MGTC).

LCC2030C represents the second phase in the implementation of the Low Carbon Cities Framework (LCCF).

“The carbon data for 2020 and 2019 was measured and analysed by MGTC, and the results showed significant carbon reduction, which qualified MBSA for the recognition.

The goal of LCC2030C is to reduce the intensity of total carbon emissions from cities across the country, in line with Malaysia’s commitment to a 45% reduction in greenhouse gas emissions by 2030.

“The commitment and cooperation given by all non-governmental organisations, agencies and MBSA’s strategic partners have made Shah Alam a local authority that is always at the forefront and emulated by other councils, ” said Shahrin.

“These efforts are in line with MBSA’s commitment to present the Shah Alam Voluntary Local Review Report on Sustainable Development of Goals at the United Nations High-Level Political Forum in New York, US in July, ” he added. 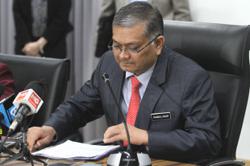