By BAVANI M and EDWARD RAJENDRA

That is the amount of water that thieves have stolen in Kuala Lumpur, Putrajaya and Selangor in the last two years, according to the National Water Services Commission (SPAN). It comes to an estimated total of 3.3 million cubic metres of water.

“That is cumulatively about RM8.2mil worth of treated water that can fill around 1,000 Olympic-size pools or can supply water to a few districts, ’’ said SPAN’s enforcement division senior director Kirupakaran Visuvalingam.

“Incidents of water theft and contamination have increased, especially in 2019 and 2020, and cases of people hijacking water through illegal connections from Air Selangor (Pengurusan Air Selangor Sdn Bhd) pipes in the Klang Valley are happening too frequently, ’’ he lamented. Kirupakaran says SPAN officers are always on site to follow up on complaints.

Kirupakaran said since 2008, SPAN has prosecuted and convicted offenders in 107 water theft cases, with more cases pending in court.

Established in 2008, SPAN implements, enforces and regulates laws on water supply and sewerage services in peninsular Malaysia and Labuan, as provided by the Water Services Industry Act 2006 (Act 655).

Prior to that, enforcement was carried out by the local authorities in the respective states.

Not limited to one industry

Based on SPAN’s record, the main culprits of water theft include factories and farms, and they occur across various major industries.

“In the past two years, the government lost some RM8.2mil to water thieves.

“In our latest enforcement exercise in March, we uncovered losses estimated at RM770,000 at one construction site alone in Kuala Lumpur, ” Kirupakaran said, adding that the case was still under investigation.

“Most of the time, when caught, some would claim to be unaware of the theft, saying they were not directly involved at the site and that sub-contractors were the ones responsible, ” he elaborated.

He said that during a raid in Kuala Lumpur last month, officers uncovered an 80mm pipe believed to have been used to supply water to a hostel housing some 800 workers.

“It is not easy and takes months to detect illegal connections as the tap would usually be underground and not visible, hence locating it would be a challenge.

“The common indicator is the billing.

“If the bill does not jive with the type of business and the work carried out, it will trigger a physical inspection (to the site), ’’ he explained.

Other tell-tale signs of water theft are the presence of extra-long poly-pipes installed to divert supply from the main pipe at a location, installing dummy meters (which are not registered to the business under investigation) and low water pressure in the surrounding area.

Kirupakaran said SPAN officers were always on site to follow up on complaints from both Air Selangor and the public. SPAN’s enforcement team at the scrapyard where an illegal water connection was discovered in Telok Panglima Garang.

On April 8, SPAN and Air Selangor carried out a joint operation at a scrapyard in Telok Panglima Garang, Banting.

Air Selangor enforcement section assistant vice-president II Nasir Othman said based on investigations, the scrapyard operator was a repeat offender who had been nabbed in January last year during the onset of the Covid-19 pandemic.

“Despite getting caught once, the operator has done it again, where a 32mm poly-pipe was connected directly to the main Air Selangor pipe that served the industrial area. An illegal extension used to divert water from the main pipe.

Nasir added that Kuala Langat enforcement officer Mohd Shafek Sajali had to conduct surveillance for almost two months to confirm that the scrapyard was again involved in stealing treated water.

SPAN tested the chlorine content to confirm that it was indeed treated water.

Those caught stealing water will be investigated under Section 123 (1) of the Water Services Industry Act 2006, which carries a fine of up to RM100,000 or a one-year jail term or both.

The act states that no one, other than the licensee, can make an extension from public water pipes. 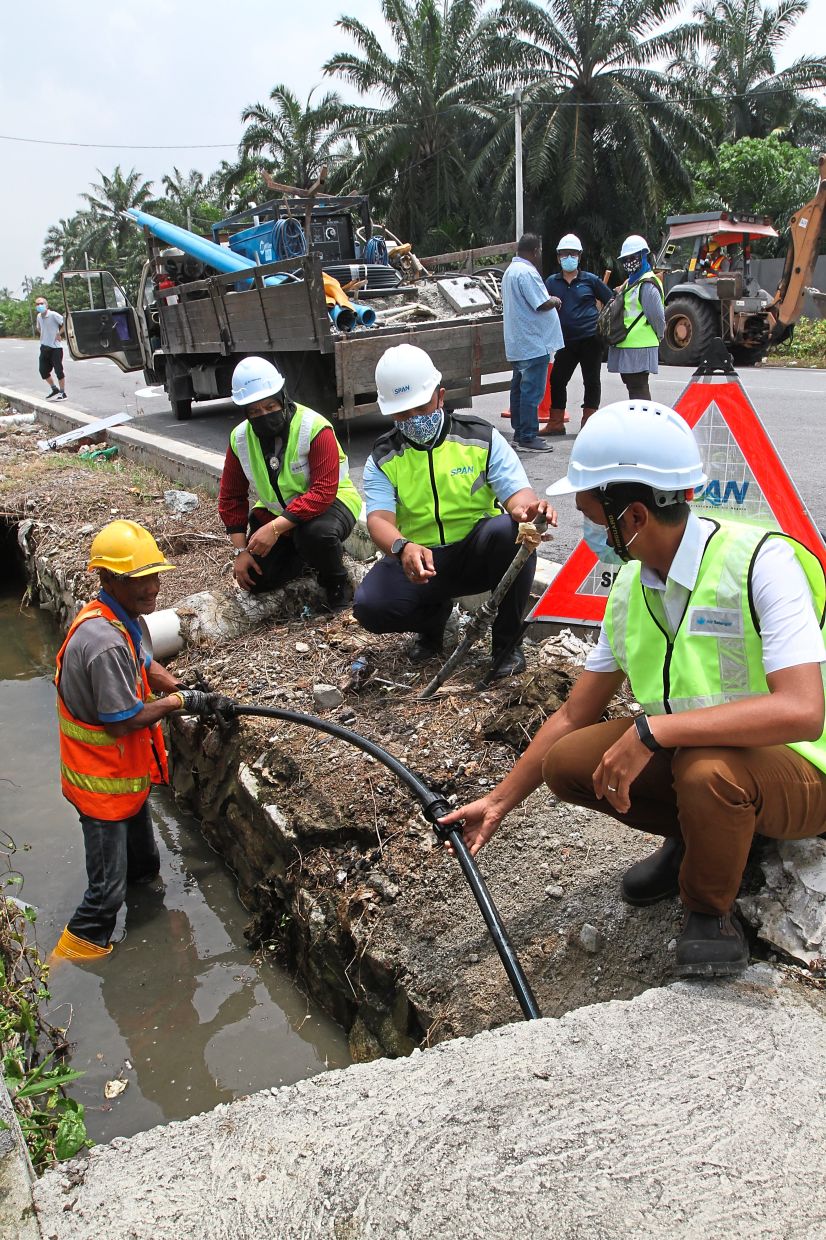 Members of the public who have seen or know of any leakage and broken pipes, illegal pipe connections or meters manipulated are encouraged to immediately lodge a report with SPAN’s Enforcement Department at 03-8317 9333 or email aduan@span.gov.my.