ONE of Kedah’s most respected philanthropic organisations, Yayasan Sultanah Bahiyah Foundation (YSB), has received a welcome boost to give more aid to the community.

The contribution from the Prime Minister’s Office is aimed at helping the foundation’s efforts to ease the struggles of Kedahans against the Covid-19 pandemic.

The RM1mil education fund from SC Estate Builder Berhad is to last for 10 years, with contributions of RM100,000 yearly, for YSB’s Titian Bistari Project for schools and other education related programmes.

“It has gone through various obstacles and challenges, but the foundation stands strong and continues to provide service to the community thanks to the support and encouragement of friends and donors.

“The foundation gives great priority to education. Our Titian Bistari Project has gone through several phases in finding effective methods to impart knowledge to pupils, ” she said.

In the last 23 years, Titian Bistari focuses mainly on pupils in Years Four, Five and Six from among the rural community.

“In line with changes to the education system, YSB also plans learning methods that can shape the sustainability of pupils by applying the national education system of teaching Science, Technology, Engineering and Mathematics in English.

“This project will be continued with modules that are suitable for pupils, ” she said.

She added that YSB envisions becoming an NGO that will overcome changes in all aspects including education, health, entrepreneurship, sports and human capital. 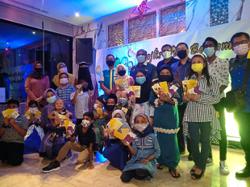