More than 50k potholes in S'gor reported on Waze

SHAH ALAM: A whopping 52,295 reports on potholes in Selangor were recorded on mobile navigation app Waze between January 2019 and September 2020 by road users.

From the total, 37,130 reports were on potholes on roads maintained by the various local councils and 10,219 were on roads under the Federal Public Works Department (JKR).

Another 4,553 reports were on Selangor JKR roads and 393 on roads under the district land office.

This was revealed by the Mentri Besar Datuk Seri Amirudin Shari (pic) at the state assembly sitting when responding to a question by Edry Faizal Eddy Yusof (PH-Dusun Tua), who wanted to know the number of pothole reports received on Waze.

Besides him, Datuk Dr Ahmad Yunus Hairi (PAS-Sijangkang) had also asked if resurfacing the entire road would be better than patching holes.

"On some roads, there are multiple patches which means that particular stretch has been patched a few times.

"Wouldn't it be more cost-saving to just resurface the entire road instead of patching because most of the time, it cannot last," he said.

Joining him was Lau Weng San (PH-Banting) who urged the state to make full use of the data collected by Waze.

"Now that we know where all the potholes are, I hope the state can use it to analyse hotspots and allocate fund.

"If the authorities only wait for reports to come in to take action, then the firefighting will never end," he said.

Mohd Fakhrulrazi Mohd Mokhtar (PH-Meru) questioned if the state can take action against the concessionaires appointed by the Federal Government if they do not upgrade or carry out the road repairs in a timely manner.

"Over the years it has been known that the more problematic roads are those maintained by JKR, so does the state government have the powers to act on them if needed," he asked.

Amirudin said resurfacing of roads was something the state would consider doing as it would be more cost-saving in the long term compared with patching.

"We will have to get the feedback from road users as most of them want a fast fix to the potholes and resurfacing in will incur more time to carry out.

"As we move towards a smart state, we are also in the process of mining the existing data, including from Waze, and will be analysing it to understand the trends," he said.

Amirudin added that the state has already set up a smart command centre which would collect data and analyse them in a bid to improve all aspects of the state including infrastructure.

"About 80% of heavy vehicles are overloaded and this can cause damage to the road," he said and added that the roads in Port Klang were facing the issue.

He said to handle the issue, the state would be installing a new technology called the Integrated Road Information System (Iris) next year which can detect the road's health and overloading problems.

"We must understand that we cannot expect the roads to be in good condition forever and there is an expiry date to roads.

"A majority of the roads in the state are over 40 years old and are riddled with structural defects so if we do not rectify it, even patching and resurfacing will not last long," he said.

Izham also said to solve the maintenance issues in federal roads, he had proposed to the Federal Government to de-gazette federal roads to be under the state and utilise the Malaysian Road Record Information System (Marris) funds.

"This is so that we can handle it and when it is under the state then more Marris funds can be channelled for roads works. 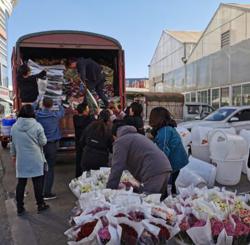