The stall operators are now given trading lots close to the wet market traders inside the market.

TRADERS who previously set up stalls along the corridor outside the Tanjung Bungah market food court in Penang, want the authorities to allow them to operate at their regular spots again.

Twenty-one traders were asked to move their stalls into the market next to the food court a few months ago during the movement control order (MCO).

Among them is bag and accessories trader Eric Chew, 53, who said his business had dropped by almost 80% since moving his stall into the market.

“I have been trading here for more than 20 years.

“Since we moved into the market in May, business has been bad.

“Many customers decided not to come into the market as the area is cramped and hot. 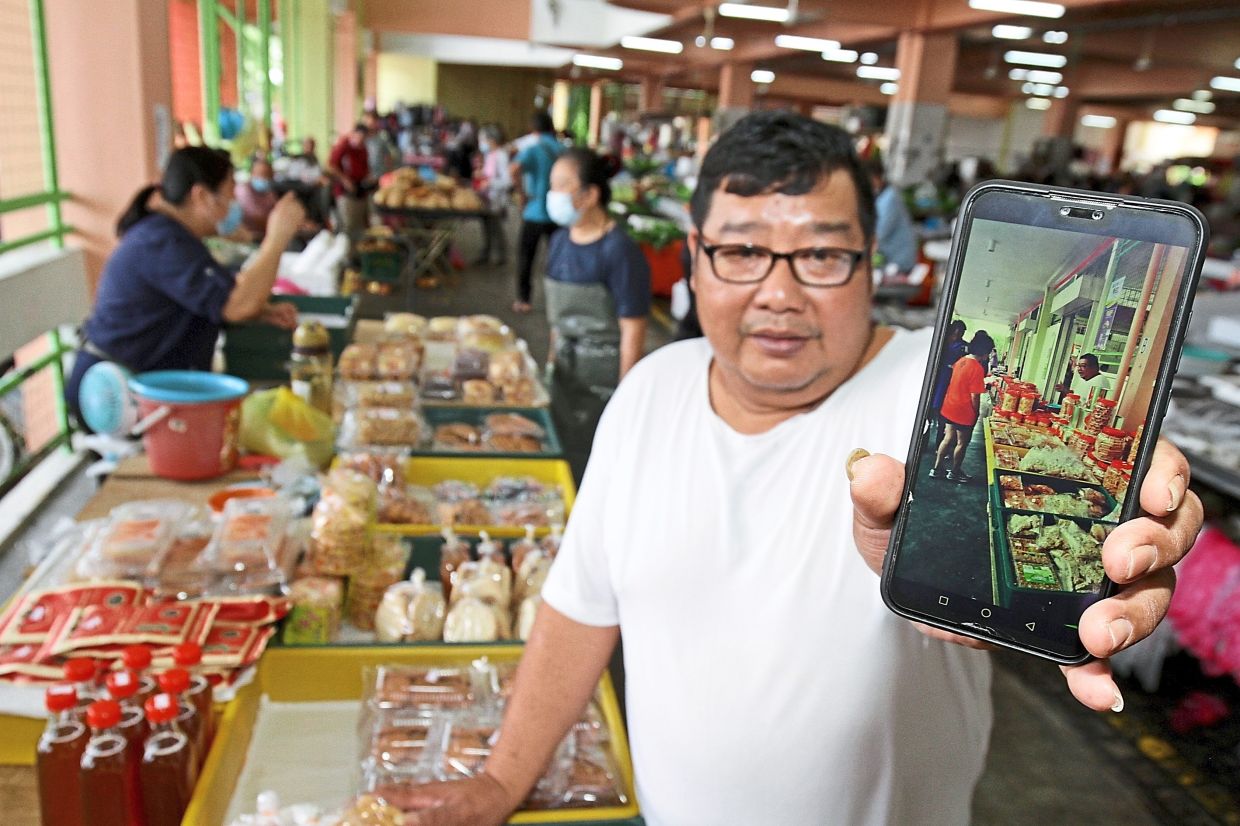 Chang showing a picture of his stall when it was previously located at the corridor of the Tanjung Bungah market food court.

“The area where the stalls are located is too narrow and I find it hard to display my products.

“I hope that our stalls can be moved out again as the distance between us and the wet market stalls is just too close, ” he said when met at the Tanjung Bungah market on Saturday.

Fruits seller Tan Leong Hoe, 58, who had been in the business for more than 20 years, said his sales had dropped by at least 50%.

“Initially, my stall was placed outside the food court. But, now we have moved into the market.

“Before this, my fruits are sold out rather quickly and sometimes, even before noon.

“But now, I have to wait until late in the afternoon, ” he said.

Bread and biscuits seller Chang Sek Moon, 54, said business had dropped by at least 70% since his stall was shifted into the market.

“Our regular customers say that they do not want to come into the wet market and some have complained that they could not find my stall.

“Previously, my customers will enjoy their meals at the food court before buying bread and biscuits from my stall when they go home.

“The area allocated for the stalls is too small and it is impossible for us to put all our items out, ” he said.

“The area is cramped and the ventilation in the market is poor, forcing customers to avoid entering the market to buy things.

“We understand that the relocation is to beautify the area but due to the space constraints, we hope that the authorities will do their part by communicating with the traders before making any decision.

“We hope that the state assemblyman and Penang Island City Council officers can come to the ground and listen to the plight of these traders.

“We will be sending an appeal letter to Tanjung Bungah assemblyman Zairil Khir Johari after collecting signatures from the traders here, ” he said when met at the market on Saturday.

Meanwhile, SPF founding member and former Tanjung Bungah assemblyman Teh Yee Cheu said during his term as assemblyman, the traders were not asked to shift their stalls into the market as the stalls did not affect the movement of marketgoers.