Over 65 illegally run premises shut down in DBKL ops

A DBKL enforcement officer sealing a shop in a commercial complex because it was run by illegal immigrants.

A TOTAL of 67 premises in Kuala Lumpur have been shut down and items in them seized since the movement control order started, as the businesses were operated by illegal foreign workers.

Shoplots, roadside stalls and outlets operating inside complexes were also raided by Kuala Lumpur City Hall (DBKL) enforcement officers and sealed with yellow tape as a warning to those who break the law.

Kuala Lumpur mayor Datuk Nor Hisham Ahmad Dahlan said the blitz was carried out following enforcement officers’ investigation as well as tip-off from business owners and the public.

He said dozens of foreigners were undocumented and were operating using expired or illegal work permits or using licence that was sublet to them by Malaysians.

It was learnt that residents raised concerns about the illegal businesses that were contributing to pollution and overcrowding in various locations across Kuala Lumpur.

In some places, even residential apartments were being used as a “wet market” and storage space for food.

Enforcement was carried out under Section 101 of the Local Government Act 1976 and Section 70 of the Street and Drainage Act 1974.

Nor Hisham said more raids were being planned and he warned those doing business illegally to stop on their own accord.

He said Malaysians who sublet their business licence to foreigners would be blacklisted.

“We have no authority to arrest foreign nationals, that is under Immigration Department’s jurisdiction.

“But we will monitor to see if they come back and we will take action.

“We will also not hesitate to take action against locals who abuse their licence. I promise that we will be watching, ” he said. 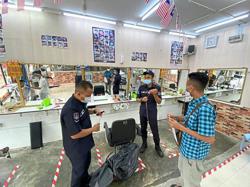