FOOD staples are being distributed to the affected residents of Selangor Mansion and Malayan Mansion flats along Jalan Masjid India, Kuala Lumpur after the buildings were placed under enhanced movement control order (MCO) on Tuesday.

“The building management has provided us with a list of the residents there and they will be sent food every day.

“There is a strict schedule for residents to pick up the produce to avoid overcrowding.

“Everything is being controlled as per the Health Ministry’s standard operating procedures, ” he said when contacted.

He added that strict enforcement was being carried out by the police and army during the enhanced MCO.

Information would also be broadcast via loud hailers to the residents, 97% of whom are foreigners, in their native language as well.

Cleaning and disinfection exercises are also being carried out in the area every day, including at Menara City One condominium tower nearby.

The Selangor and Malayan Mansions, which are located opposite each other, are the second block of buildings in the city, after Menara City One, to be placed under the enhanced MCO after 15 positive cases of Covid-19 were detected there.

The two mansions and the condo are only five minutes away from each other.

“The Kuala Lumpur City Hall (DBKL) Health Department will cooperate with the Fire and Rescue Department to carry out the disinfection exercise throughout the period.

“On April 8, some 50 personnel from the health department were deployed together with the fire department to carry out disinfection, ” he said.

Notices by DBKL were pasted on the surrounding premises, ordering them to remain closed from 8am to 2pm to make way for the disinfection exercise, a check by StarMetro revealed.

Security guard Kumar Rai, 27, a resident at one of the buildings, said he was working when the enhanced MCO came into effect, and had been unable to return home since.

“For now, I have to take shelter in a small room at another building near the flat, ” he said.

The Nepalese, who has been working in Malaysia for the past three years, said he used to go to a nearby restaurant to buy roti canai for dinner.

“But since yesterday, the restaurant is closed and I am unable to buy food there.

“For now, I rely on the rice that my employer sends to me twice daily, during breakfast and lunch, ” he said, adding that he worked a 12-hour shift from 8am to 8pm daily.

Meanwhile, a man who only wanted to be known as Rasea, 34, from Bangladesh, said he was surprised to find shops selling essentials in the area closed.

“I came here to buy a bag of rice but was surprised to see the area so heavily guarded by armed men, and all the premises closed, ” said Rasea, who lives in Jalan Pudu Lama.

A check by StarMetro in the area yesterday showed several makeshift tents erected to house the police and army personnel, while the buildings’ entrances were barred with barbed wire.

A medical base was also set up nearby. Residents who were locked inside were seen looking at the streets below from the balcony.

Meanwhile, Bukit Bintang MP Fong Kui Lun noted that there were still people going in and out of the nearby buildings.

“Both buildings are very old buildings and occupied mostly by foreigners.

“There are many occupants in one unit, which makes the spread of the virus easier, ” he said.

Fong also urged DBKL and other charitable organisations to help residents in both buildings get food and essentials.

“Some of the residents here cannot afford food delivery, so they need the aid badly.

“I also hope the government will offer free testing for Covid-19 to all of the residents living in the red zone, ” he added.

The latest enhanced MCO involves some 6,000 residents in 365 residential and commercial units in the buildings. The restriction order will be in effect until all residents are screened.

The Health Ministry is hoping to complete screening in 10 days.

Federal Territories Minister Tan Sri Annuar Musa has said that the ministry would be working with the High Commissions of the foreign nationals affected by the enhanced MCO.

The nine-storey flats located in the heart of Masjid India are mostly occupied by foreigners, while the ground floor houses shoplots selling fabric and travel and tour agencies.

On March 31, residents of Menara One City condominium were placed under stricter movement restrictions after 17 confirmed Covid-19 cases were detected there.

The move affected 3,200 residents in 502 condominium units and business premises and was supposed to last until April 13.

Kuala Lumpur has been declared a Covid-19 red zone, after Cheras, the last health district zone turned from orange to red zone after hitting 44 cases on Sunday. 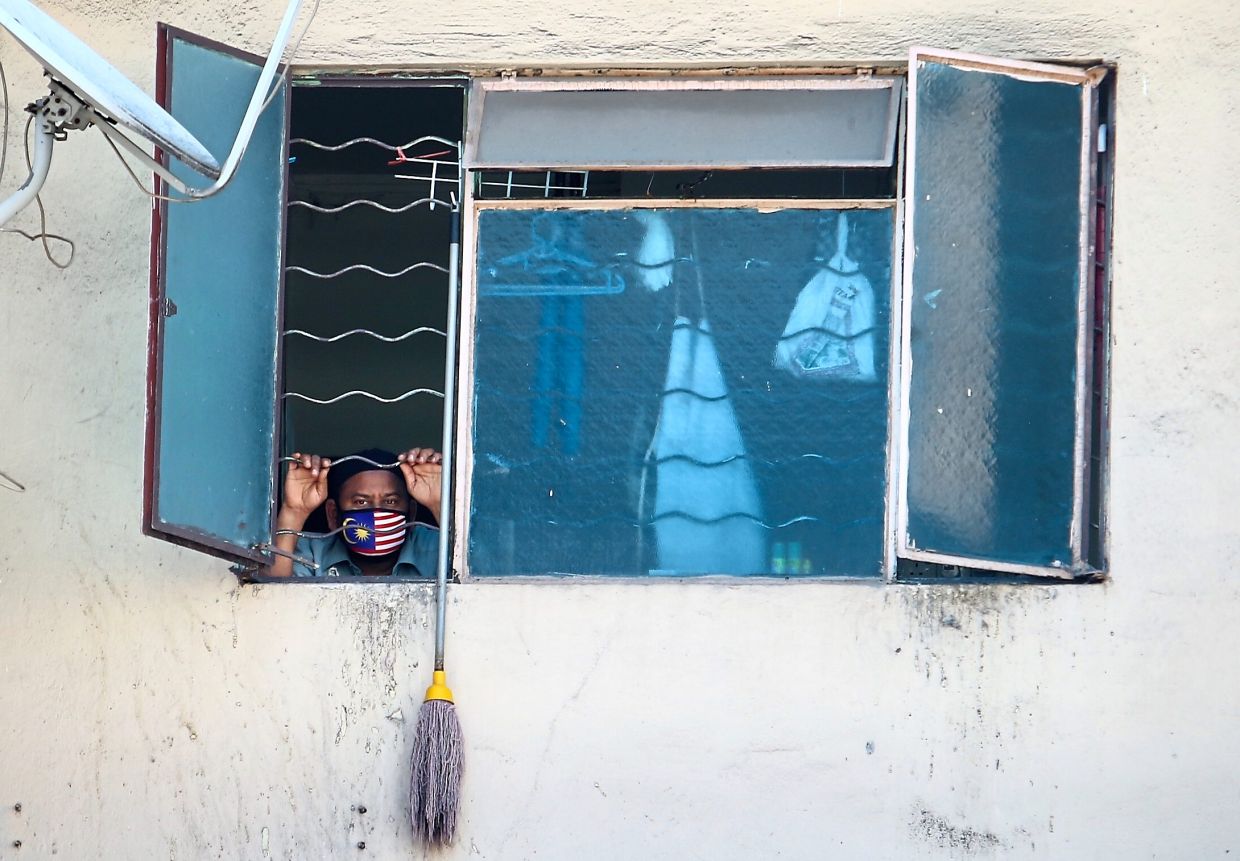 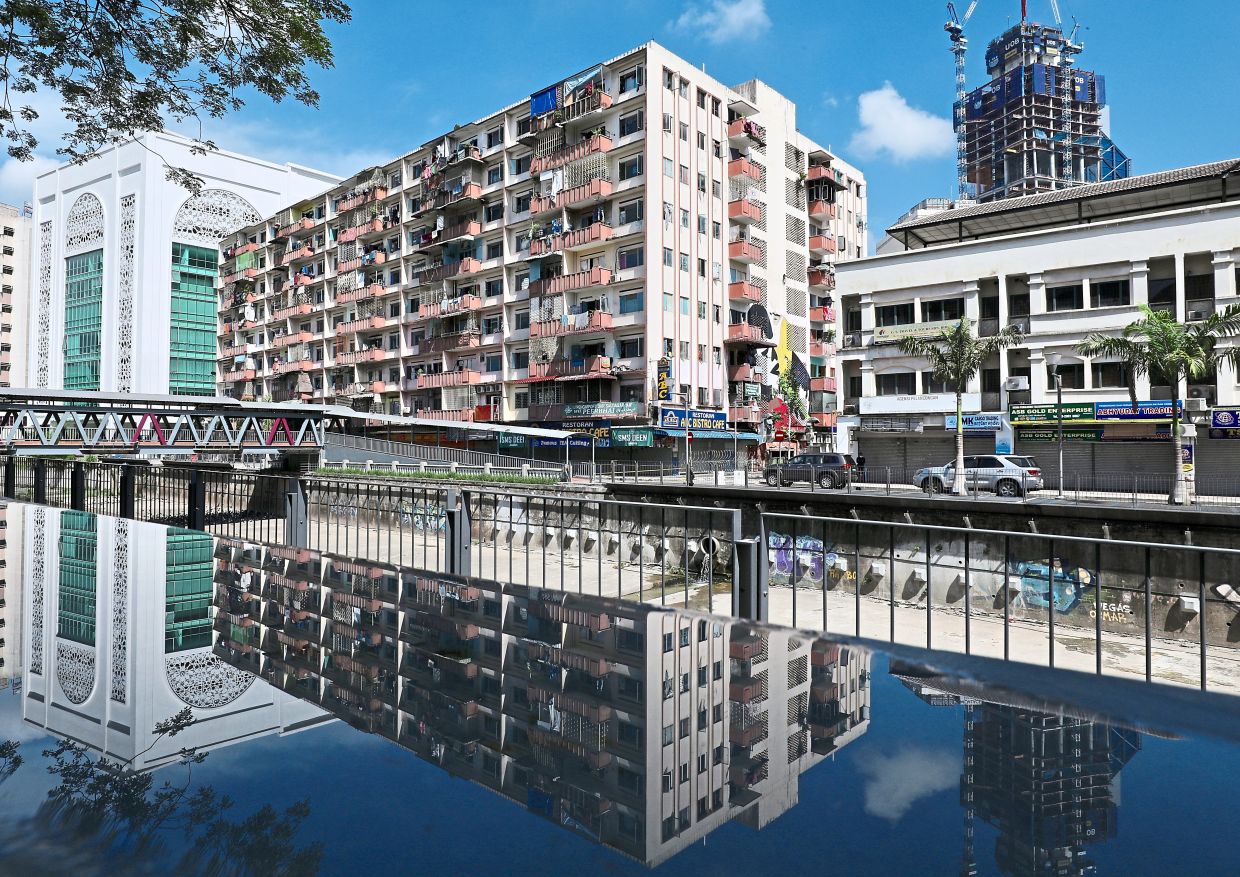 A resident peering out of his window after both mansions were placed under enhanced MCO.

DBKL staff aided by the Fire and Rescue Department conducting a disinfection exercise along Jalan Masjid India near the two buildings.

A view of the Selangor Mansion from across the Klang River.