THE looming 80-hour water cut starting today in several parts of Klang Valley is causing anxiety among all consumers – even those in areas not named in the list released publicly.

The advance one-week notice from Syarikat Bekalan Air Selangor Sdn Bhd (Syabas) on the water supply disruption starting today until April 27, seems to have increased fear rather than lessened them.

Syabas has told consumers to store enough water to last for two days as the mobile tankers will only be deployed from April 26.

Many households in Klang, which is one of the affected districts, have been storing extra water at home and filling tumblers with drinking water.

In Taman Maznah, Klang, housewife Azizah Talib, 62, began to fill up water for drinking as soon as she completed cooking yesterday afternoon. 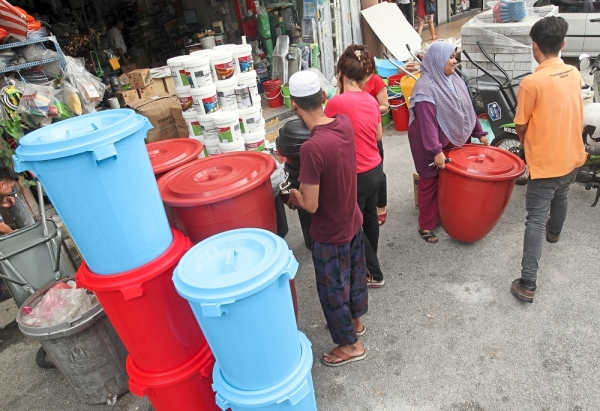 “I decided to store drinking water a little earlier as I am not sure what time supply will stop,” she said.

Others are stocking up on mineral water, which is sold out in numerous shops.

Shah Alam resident J. Wong said a hypermarket worker told her that customers were buying mineral water by the boxes and the stock was gone soon after the hypermarket opened in the morning.

Retiree Mokhtar Md Rashid, 70, who lives in Taman Sri Menegun off Jalan Kota Raja, Klang, said the improvements should have been planned better.

“This water cut should not stretch for so many days. Water tankers should be deployed by the second day.”

168 Kopitiam owner Geo Ong, 34, said he might have to close his shop on the third day as they may not have enough water stored to operate their business comfortably.

“We are concerned about cleanliness,” he said. Choon Guan Hainan Coffeeshop owner J.K. Foo, 68, said she too only had enough water in her tanks for two days. The coffeeshop is in Pandamaran Chinese New Village, Port Klang.

Although his area of Alam Damai, Cheras, will not be affected this time, every major supply disruption brings back bad memories.

“Syabas did not give any notice then. The cut happened during Chinese New Year. Water trucks only came after many complaints.”

If not for a kind neighbour who left his gates open so those in need could draw water from his compound, the situation in Tan’s house would have been very unhygienic indeed.

Tan also recalled having to take baths at his workplace.

For businesses which depend on consistent water supply, there is no choice but to prepare for such contingencies.

Jolene Lee, marketing communications manager of a hotel in Jalan Bukit Bintang, said plans had been put in place to ensure operations would not be interrupted.

“We have issued notices as well as letters and reminded guests to be mindful of their consumption and save water,” said Lee.

The hotel’s operations director said the roof-top tanks could supply water for two days, after which they would have to rely on mobile water tankers.

Although Puchong Utama resident Susie Lee’s neighbourhood is not in the list, she decided to store water as a precaution.

“Even though we are not affected, I will always store water just in case,” she said.

Subang Jaya Residents Association and SS17 Rukun Tetangga chairman AB Naicker is also playing it safe by storing water even though his neighbourhood is not listed.

“However, I have advised residents to store water for the duration of the proposed cut,” he said, adding consumers should not be inconvenienced in such a manner.

“This should not be happening if the plant was maintained properly.”

Bandar Puteri 8 Residents Association adviser and RT chairman Datuk Samson Maman said although his house in Bandar Puteri Puchong would not be affected, he was not as sure about his business in SS15 of Subang Jaya.

“I am thankful that advance notice was given but there is a limit to how much water we can store on my premises.”

Samson is worried that the restoration of supply may not be the end of the problem.

“There have been frequent cases of pipes bursting due to the sudden increase in water pressure when supply is restored. I hope Syabas will learn from past mistakes so that it won’t recur,” he said.

Its chairman Low Chun Foo said about 100 traders would be affected by the water cut.

“We are planning to distribute a memo to traders to close shop on Thursday due to the water cut.

“The market will be dirty and smelly if we don’t clean it daily.

“Unfortunately, we cannot store water anywhere within the market because space is limited.

“We rely solely on water from the main pipe,” said Low.

He said any disruption of more than two days would make running their business difficult.

Low said he did not expect all traders to adhere to the memo.

“Some say they will manage and bring water from home,” he added.

“We will only sell packet or canned drinks when we run out of water.

“We can only use water stored from the direct pipe, not from water tanks. This is the rule imposed by local councils,”

Food operators will use takeaway containers when serving food, even to those dining in.