It’s a two-wheeled nightmare for DBKL

A mountain of oBikes piled up in a DBKL depot in Cheras, waiting to be destroyed for scrap.

This mountain of broken bikes was not the vision the city was expecting.

In fact, the dream of a city with fewer cars hogging the streets, more people utilising public transportation and a decent number on two-wheels plying the city’s cycling lanes has now become a logistical nightmare for DBKL.

A nightmare that is giving Kuala Lumpur mayor Datuk Nor Hisham Ahmad Dahlan a headache.

The no-nonsense Nor Hisham has issued an ultimatum to the company which is believed to have shut shop here – “Claim your bikes by mid-April or they will be seized and destroyed or sold for scrap!” DBKL enforcement officers have the unenviable task of collecting the bikes that have been left to rot in literally every nook and cranny of the city.

It is not enough that the growing number of abandoned vehicles are already an eyesore; the local authority now has the added burden of having to deal with abandoned bicycles that have been vandalised and obstructing pedestrian traffic.

Some of these bicycles have ended up in rivers and back alleys, even clogging drains.

This was not part of the plan when the oBike bike-sharing app took off in Kuala Lumpur in April 2017, with dozens of its yellow and metallic bicycles quickly flooding the city centre.

Based on a StarMetro interview in June that year with an executive from the Singapore-registered company, the bike-sharing app had over 20,000 users who were charged RM1 every 15 minutes. Payment was made through eWallet and a deposit (refundable) was required.

For the uninitiated, oBike is an on-demand and dock-less bicycle sharing platform. Two types of city bikes are provided: a 22kg bicycle with basket and headlight, and a 14kg two-wheeler without additional features. Users who download the app can search and reserve a bike, and use a QR code to unlock the bike.

The bicycles have GPS for easy tracking and tubeless tyres to prevent them from puncturing. Their presence was also noticed in Selangor, particularly in student-populated residential areas, bus and train stations and cafes in Petaling Jaya and Subang Jaya.

So what went wrong?

Part of the problem was the lack of proper places to park the bikes and with no proper station or docking system in place, users began indiscriminately leaving the bicycles everywhere.

“Our officers are constantly picking up these bikes, which have been badly damaged, and they are taking up space in our depots,’’ said the officer, who declined to be named. Broken oBikes can be seen in various parts of the city, and they eventually end up in DBKL depots.

“It’s quite ironic that the company, which touted itself as being green and wanting to preserve the environment, is now shirking responsibility,’’ the officer said.

“And we cannot seem to locate them. Where are they now and why are they not clearing their bikes?”

In fact, DBKL held several internal meetings to resolve the matter and part of it was seeking legal advice on what to do with the abandoned bicycles.

“We are trying to find ways to clear the bikes and claim the cost for doing so because the bicycles do not belong to us,’’ said the officer. “Most were abandoned and it is a lengthy process requiring clearance from various departments, including administration and enforcement,’’ he said.

When contacted, Nor Hisham said the company had until April 15 to claim its bikes, failing which DBKL would seize and make arrangements to destroy or sell the parts for scrap.

But DBKL officers said they were finding it difficult to contact the managers of oBike.

“We have been trying to contact them and it is not easy,’’ the officer said. “In fact, we have the right to issue a summons to oBike for littering and obstruction.”

Indeed the company’s core principle was supposed to be an equitable and affordable form of transportation based on the principle of green and healthy living.

“We initially partnered with oBike because of that green principle as DBKL is trying to reduce carbon and save the environment in the process, but the bikes have now become a nuisance to us and become rubbish,” lamented the officer.

oBike got off to a grand start in Kuala Lumpur when the company partnered with DBKL during the 2017 SEA Games. When it was launched, oBike was meant to usher in a more environment-friendly public transport platform. But now, the broken bikes can be found rotting in many parts of Kuala Lumpur. — Filepic

The company provided free rides from Aug 19 to Aug 30 as part of efforts to provide hassle-free convenient travel and in reducing carbon emissions.

However, soon after that, things started to fall apart and the problem of vandalised bikes and complaints of obstructions started cropping up everywhere.

StarMetro attempted to contact oBike for comments but was unsuccessful. Managers who were interviewed before told StarMetro that they were no longer with the company and had no idea if oBike was still around.

The oBike app is still available on Android and Apple app stores but there are numerous complaints because users are unable to get a refund for deposits paid.

oBike was launched in February 2017 in Singapore. It ceased operation on June 25 last year and subsequently filed for insolvency.

The service has a presence in 24 countries, including Australia, Thailand, Taiwan and several European countries. However, it has run into problems in many of these places due to fines imposed by the local authorities for having to collect abandoned bikes.

StarMetro reached out to several individuals to understand their experience when using the service.

The major complaints were that the bikes were not sturdy, poorly maintained, and had no parking facilities.

This resulted in them being left all over the place.

Lack of dedicated bicycle lanes in the city was also among the reasons for the poor uptake.

“It’s a failure,” said a college student Eric Chong. “It started off okay, but just got really bad that it became a nuisance.” This oBike was abandoned in a back lane in Jalan Imbi and is reportedly being used by the homeless community there.

Kevin Tan, an accounting student from a local college, said the bikes were okay for short journeys.

“It’s fine when you are a student living near a university or college who just needs to get to class on time but it isn’t suitable for long journeys,” he added.

Student Hari K. said the bikes were too heavy.

“At times when the route had obstacles, I had to carry the bike and boy, was it heavy!” she said.

Stuart M, meanwhile, said poor roads, no proper bikes lanes and Malaysia’s weather were among the ingredients for the project’s failure. 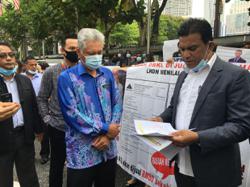