Underage children riding a motorcycle without a helmet, is a common sight in many rural areas and new villages. — filepic

PARENTS living in new villages and rural areas need to be more mindful of their children’s safety, particularly when it comes to riding motorcycle without a licence or wearing helmet.

In light of the recent fatal accident involving an 11-year-old boy riding a motorcycle who hit into an ambulance in Taiping, parents interviewed by MetroPerak agreed that more should be done on their part to control their kids.

However, some also commented that it might be difficult to stop their children from getting influenced by their peers who had no qualms riding a motorcycle despite being below the age of 16.

Coconut milk supplier Yang Rafidah Mohd Isa, 42, said she was shocked when she got home one day and saw her children riding a motorcycle together.

“It’s not like my husband and I ever taught them to do it.

“I was so surprised that they learned it from their friends. 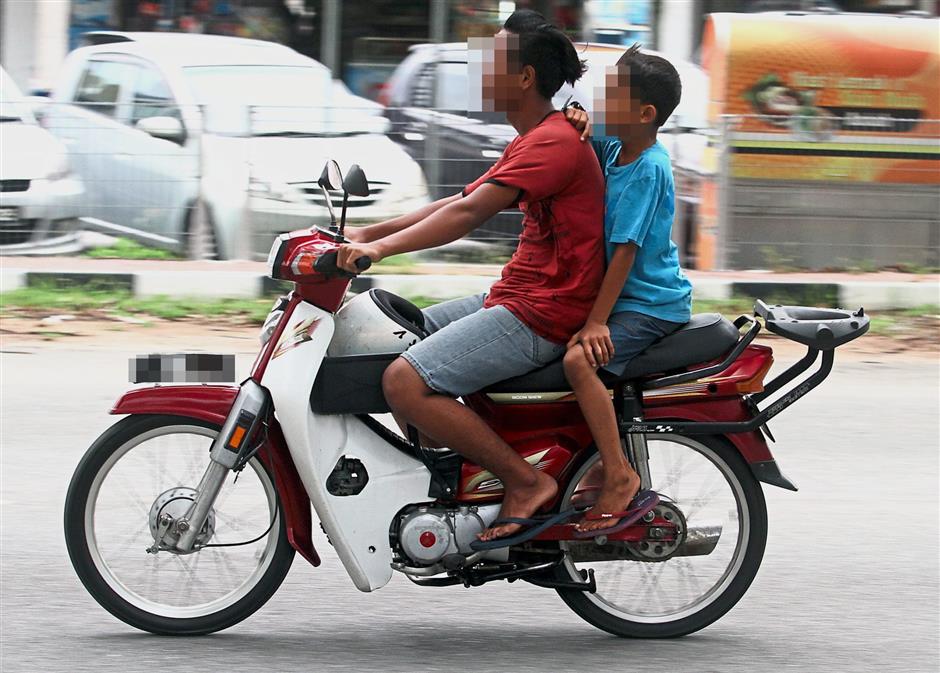 Section 39 of the Road Transport Act states that no person less than 16 years old should ride a motorcycle. — filepic


“I was angry with them, but they were adamant despite knowing we were unhappy,” she said.

The mother of four children aged nine to 20 said when she realised it was hard to stop them from riding two wheels, the least she could do was advise them to ride only within the kampung area.

“I always tell them to take it slow when they want to ride to the football field or to the nearby grocery store.

“I give them stern warnings not to ride on main roads where traffic there is busier and more dangerous,” she said.

Late last month, it was reported that an 11-year-old boy died after being trapped under an ambulance, which he hit into while riding a motorcycle with a 12-year-old girl as pillion rider.

The boy died on the spot at Jalan Kg Senduk Tendah, while the girl was seriously injured.

Some parents find it hard to stop their underage children from riding motorcycles, they could only advise them not to ride on main roads.


Yang Rafidah said things were different these days, as it was easier for families to own motorcycles.

“Back then, it was more common for us to use bicycles,” she said.

Yang Rafidah’s neighbour, civil servant Salman Najmuddin, 50, said while other parents might choose to turn a blind eye to their underage children riding motorcycles in the village, he is strict with his own.

“I do not encourage or allow my children to do that, even if they are with their friends.

“These children only know how to ride a motorcycle, but have no clue about other aspects such as safety and traffic rules,” he said.

The father of five children aged 11 to 23, said he would only allow his kids to ride a motorcycle when they turn 15. Some parents believe that children younger than 16 must only be allowed to ride a motorcycle with an adult, and not on their own.


“I think at that age, they are able to think for themselves better and know right from wrong.

“Any younger than that, they should not be allowed to ride the vehicle without an adult.

“The attitude of parents living in kampung areas need to change.

“They should not wait until a tragedy like this to happen to be cautious,” he said.

Convenience store owner Mohd Nizar Ahmad, 72, said the practice was too common, and often, parents were the ones sending the children to run errands using the motorcycle.

“I have seen many of such kids coming to my store.

“I don’t understand it myself too, it just seems as if parents do not know how to look after their own children,” he said.

Mohd Nizar questioned why the police rarely went after these kids even though the practice was so common in the village.

“They should come into kampung areas more often to start patrolling and take action against these kids,” he said.

At a new village, trader Lim Kam Yoke, 52, said it was common for youngsters to ride motorcycles without helmets.

The mother of one, who operates a roadside stall, said she often reprimanded teenagers and children who came to her stall on motorcycles to buy food.

“If I know them, I would reprimand them because it’s dangerous.

“I tell them to stop doing it, or at the very least, be extra careful and ride slowly.

“I am thankful my own son knows better. I never allowed him to ride a motorcycle when he was still underage, and he too refused to follow his friends on motorcycles,” she said.

Lim recalled a recent incident involving her sister’s friend, who was hit by an oncoming car while she was on her motorcycle and bled to death even though she was wearing a helmet.

“Anything can happen on the road. If these kids do not wear helmets, it is even more dangerous,” she said.

Lim also said parents needed to be more proactive and educate their children on road safety.

“Kids are often more curious than careful. They don’t know the consequences of their actions.

Perak Road Transport Department (JPJ) director Zawawi Zakaria said the department had been directly involved with secondary schools that had set up their own JPJ Cadet unit.

He said a total of 22 schools in Ipoh, Taiping, Manjung, Teluk Intan, Tapah and Gerik were involved.

“Lecture sessions with students were also held to give them exposure on responsible driving methods in compliance with the Road Transport Act,” he said.

Zawawi said JPJ held an advocacy programme earlier this year at three schools – two in Ipoh and one in Manjung – to ensure students obey traffic laws.

“We conducted an inspection and found a total of 138 violations of traffic laws such as driving without licence, road tax and car insurance, as well as underage driving.

“We advised these students on the dangers and consequences if they do not follow the law.

“We also sent out notices to the parents and guardians of these students to provide valid explanations on why their children were allowed to ride motorcycles to school,” he said, adding that JPJ would issue summonses to them the next time they were found violating the law.

Zawawi said, this proved that there were students who were eligible to own a licence but drove cars or rode motorcycles without one.

“There were also those who weren’t eligible to obtain a licence but that did not stop them from driving or riding, while some did not renew their licence.,” he said.

Zawawi said the status of driving licence ownership by a motorist could only be known at a roadblock or if the driver was involved in an accident.

“We have taken various measures to alleviate this problem. The existing method is to conduct operations for detecting unlicensed road users.

“Beefing up patrols and setting roadblocks are also ways to deal with this problem.

“JPJ also conducts the Motorcycle Special Operations on certain dates throughout the year and will continue to do so as often as possible,” he said.