THE Oasis Atrium of IOI Mall Puchong was abuzz with excitement as 150 students showcased their inventions to about 6,000 visitors at the STEM@Puchong Maker Faire 2017.

Themed “School of the Future”, the fair saw the students come up with creative innovations, employing the knowledge and experiences that they acquired during the After-School STEM (Science Technology Engineering Maths) Programme.

The programme, which was held two hours weekly after school for an entire year, involved creative thinking in developing ideas, using simple tools and materials, and advanced technology such as coding and science materials.

The participants were from schools around Puchong — five primary and five secondary — and divided into two categories.

The primary school pupils took part in the Young Innovate Junior competition where they were required to upgrade their childhood toys into something unique to reflect their learning in electronics and programming from the STEM programme. (From left) SK Puchong pupils with their DIY CCTV system at the STEMPuchong Maker Faire 2017.

Bagging the gold awards were two teams from SJK(C) Shin Cheng and another from SK Puchong.

Three silver and four bronze awards were also given to other deserving participants.

The inventions were judged based on the upcycling of materials, the usage of Arduino (an open-source electronics platform) as well as the presentation of the creations.

Apart from the competition, the event saw exhibitions of mobile applications created by secondary school participants.

The mobile applications aim to address challenges faced by schools such as library bookkeeping and tracking of attendance. Pupils showing off their inventions for the Young Innovate Junior competition.

At the launch and prize-giving ceremony, AIM chief executive officer Naser Jaafar said the agency was honoured to collaborate with IOI Group and specifically Yayasan Tan Sri Lee Shin Cheng on this project.

“STEM is more than just an acronym; it is also a skill or a philosophy.

“Science, technology, engineering and mathematics help students to learn the skills of gathering and studying information, and using that information with technology to resolve problems,” he said.

Yayasan Tan Sri Lee Shin Cheng executive director Datin Joanne Wong explained that this was also a sustainable programme by which current participants act as teachers and leaders for next year’s batch.

“This also allows us to reach out to more schools instead of focusing on just one area.

“I’ve been visiting the schools throughout the year and it’s nice to see the students working together to create something special and unique.

“The projects are also hands-on and fun; teaching them to solve problems and acquire new skills such as presenting and communicating that are relevant in the 21st century,” Wong said. 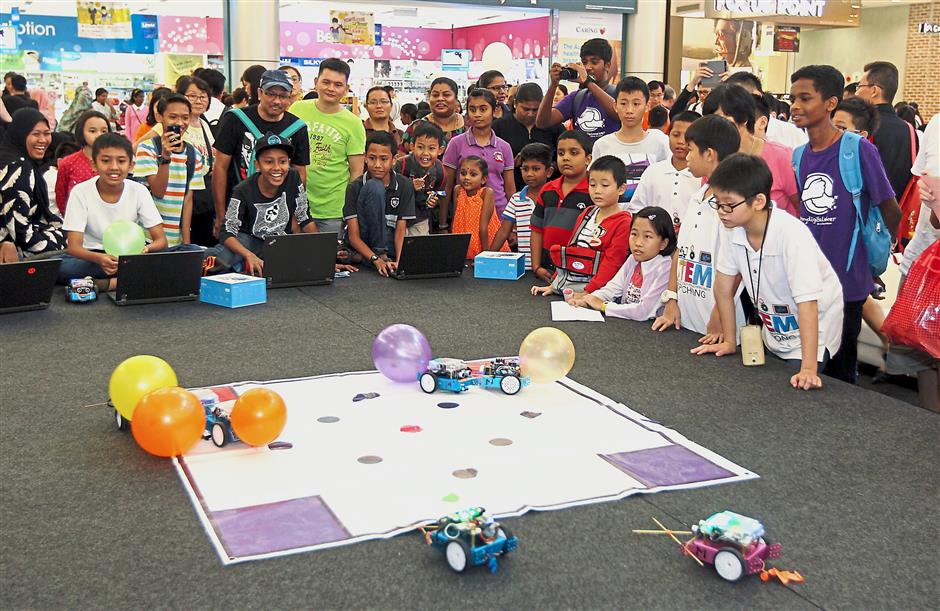 Participants of the Battle Of The Bots competition giving their best shot as onlookers cheer them on.

Commending this initiative was Institute of Teaching Education Malaysia deputy rector Dr Rusmini Ku Ahmad, who said it was an important part of the education ecosystem to complement the existing education system.

“Our world is changing rapidly and we’re entering the fourth Industrial Revolution. If we do not innovate, we will become obsolete.

“Students need to know how to read and write code as well as programme things.

“They must possess higher-order thinking skills and must be able to apply what they have learned in the classroom to innovate, invent and build things,” she stressed.