Fascinating Christmas traditions around the world that Malaysians should know

Chestnuts roasting on an open fire is a winter tradition in the West that is usually associated with Christmas. Or at least, that’s what Mel Torme and Robert Wells want us to believe in their very popular, The Christmas Song.

In Malaysia, we roast our chestnuts with coffee beans, and we certainly don’t eat them near an open fire. They’re not particularly known as a Christmas snack either, as we can easily get them freshly roasted from the weekly pasar malam, or even the mall.

If you think about it, Christmas traditions are mostly influenced by geography rather than history. Of course, in the context of religion, Christmas is the celebration of the birth of Jesus Christ on Dec 25. (There are also Christians – for example, the Russian Orthodox and Armenian Apostolic Church – who celebrate Christmas on Jan 6 or 7.) 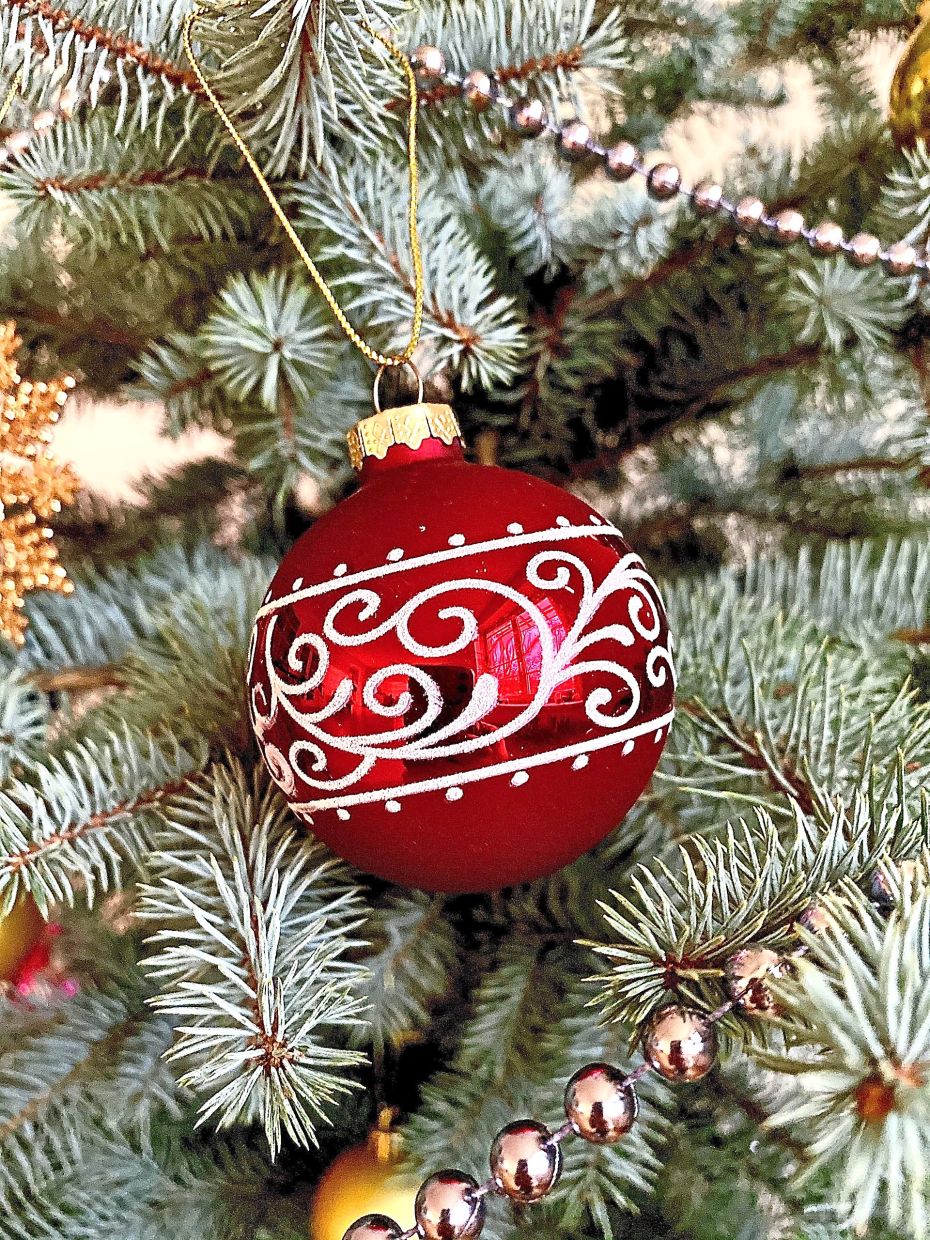 If you think about it, Christmas traditions are mostly influenced by geography rather than history.generic pic, no need to use if you don't wantHowever, most of today’s Christmas “traditions” are learned from or inspired by modern pop culture, from the practice of giving gifts and putting up a Christmas tree, to eating fruit cake, singing carols and waiting up for Santa Claus.

Malaysians don’t really believe in Santa Claus either (or do we?), but who doesn’t like the idea of a jolly, and rather magical, old guy from the North Pole that delivers Christmas presents to all the children in the world in a single night on Dec 24? To add to this wonderment, Santa Claus travels with nine flying reindeer, led by Rudolph and his red nose, and enters people’s houses through chimneys and fireplaces.

In Malaysia, we have the greater and lesser mouse deer, the much, much smaller cousins of the reindeer. Our houses don’t come with chimneys and our fireplace is called a kitchen stove.

Still, every December we beautifully decorate our houses and malls with giant Christmas trees, sparkly baubles and tinsel, snow that comes from a can, poinsettias and everything else associated with the season. And while not everyone will observe Christmas itself, most Malaysians will be celebrating the holiday season together in merriment. Invites to open houses – the one true Malaysian tradition – will be aplenty during this time too, but as we are still learning to live with Covid-19, you may want to postpone having or going to one.

Around the world, Christmas is celebrated in many different ways, some of which may even be considered just a tad “weird” (we’re looking at you, Austria!). Here are some of the more interesting and amusing traditions.

Christmas in the Philippines is incredibly grand. It really is a big deal there, but it’s not surprising as more than 90% of the country’s population is Christian. Filipinos begin preparing for Christmas as early as September, and may extend the celebrations and church masses up until January. 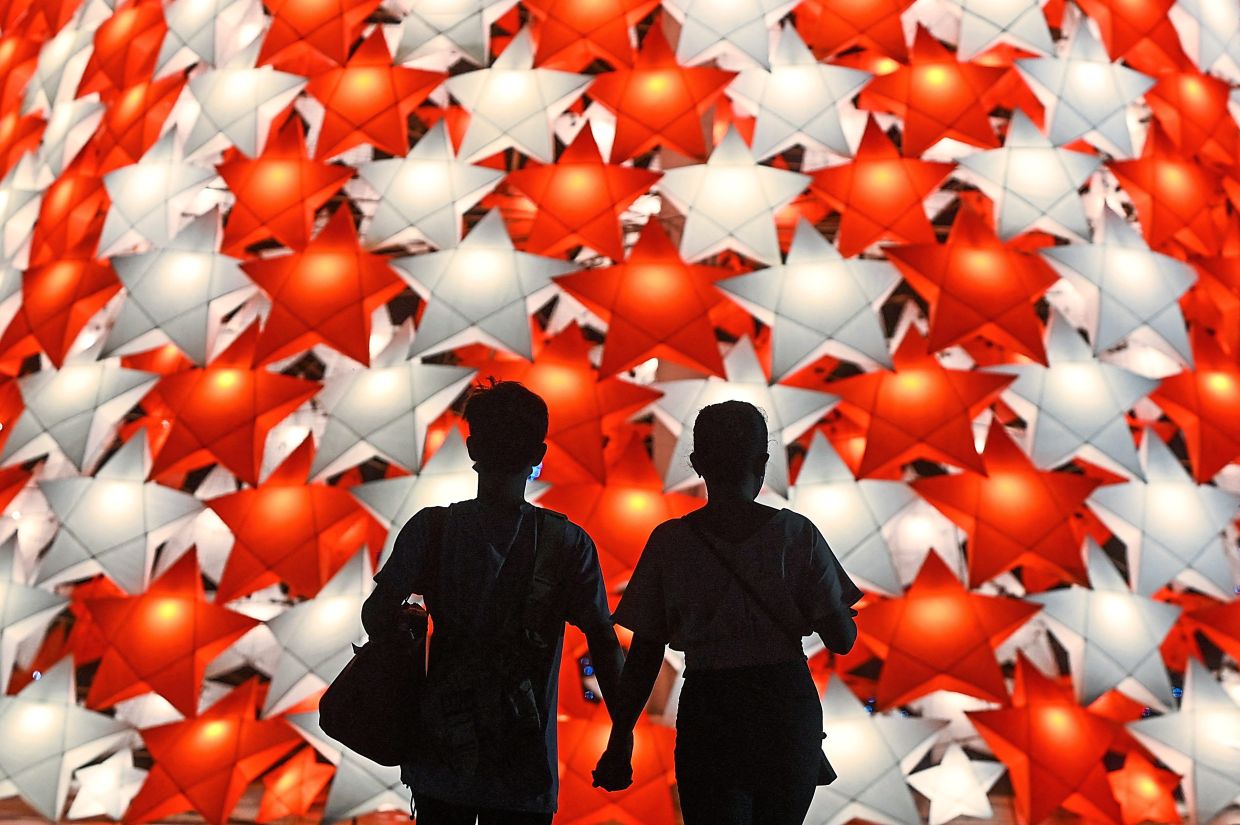 The Filipinos start preparing for Christmas as early as September. — Reuters

If you visit the country in December, you will be greeted with holiday-themed light displays featuring the “parols” or Christmas lanterns that are unique to the Philippines. These are made from bamboo and paper, while the really special ones are made from capiz shells (the country is known for its capiz shell crafts).

In San Fernando city, the “Christmas capital of the Philippines”, there is a giant lantern festival held annually on the Saturday before Christmas. This event used to be a big tourism attraction, drawing both domestic and international visitors. As many as 11 villages take part in the fest, competing with one another for lantern supremacy.

Gavle, a city in Sweden, is famous for its giant Yule Goat, which is made from straw. (Goats are said to be a Scandinavian Christmas tradition, linked to ancient Pagan practices.) Each year, this 13m-tall goat will be built in the city’s Castle Square at the beginning of the Advent season, which is four Sundays prior to Christmas day. 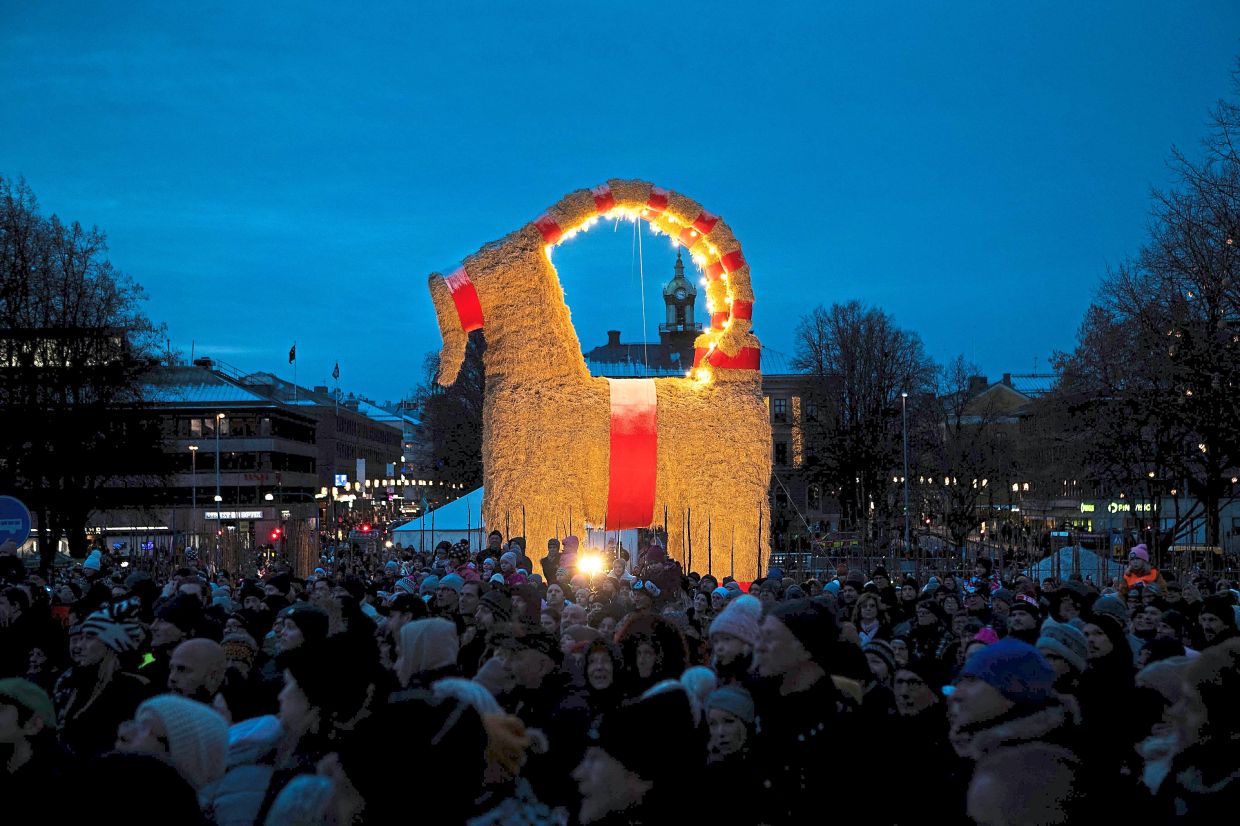 On Nov 28, the giant Yule Goat was erected in Gavle. On Dec 17, it was completely burnt down. — MATS ASTRAND/AFP

What makes this a unique “tradition” for Gavle, and Sweden in general, is that from the day it is erected, people will try their best to burn it down. But it is actually illegal to do so, and arsonists who are caught in the act will be thrown into jail for three months, or fined.

The tradition of building the giant goat began in 1966, and since then, it has been damaged 38 times.

Of course, we do not condone any illegal activity, including the burning of the Yule Goat, but if you would like to keep tabs on the goat, you can follow a live stream on the Gavle city website. Unfortunately, this year’s goat was torched on Dec 17.

Christmas is all about bringing joy to others, and being grateful for what we have and the people around us. But in Austria, every Yuletide season there is a demon-like beast that roams the streets, frightening children, especially the “bad” ones. 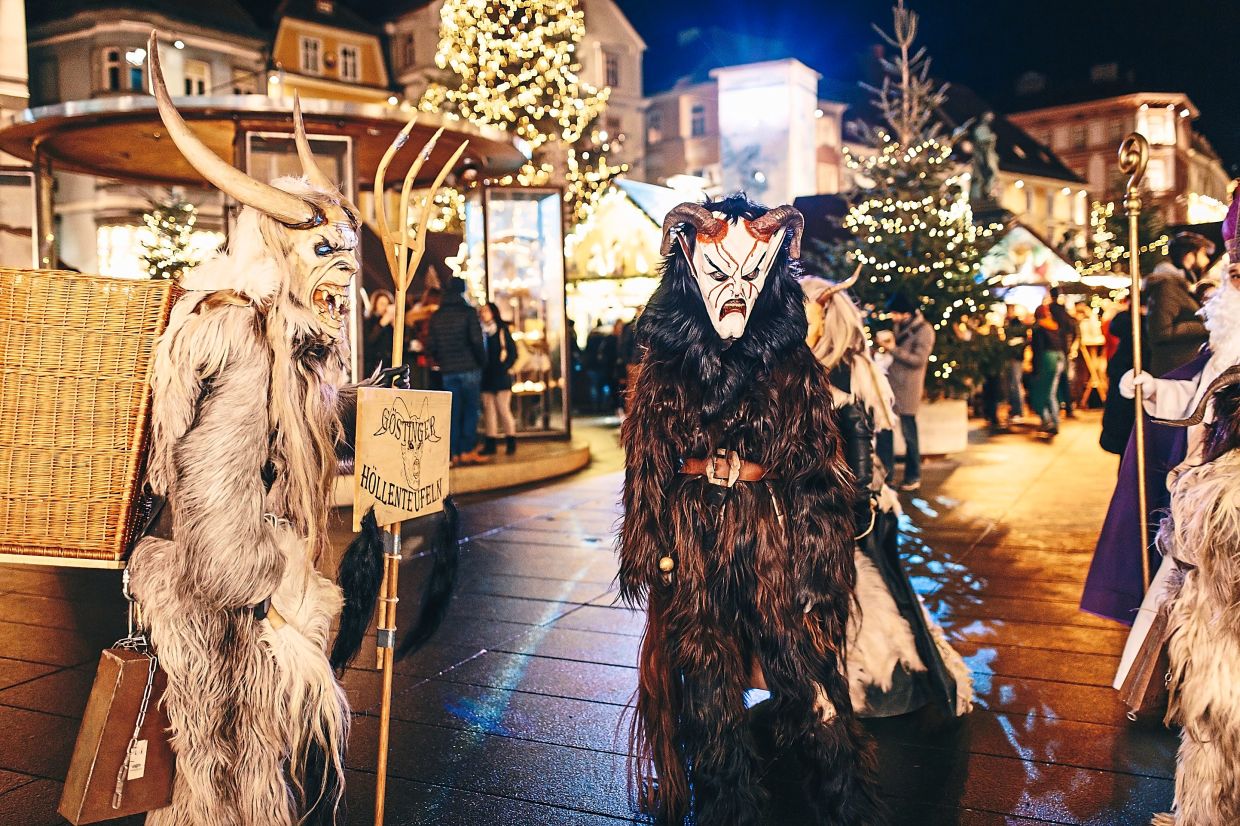 Krampus, the stuff of nightmares for kids (and some adults!) in Austria. — AFP

Apparently, in Austrian folklore, St Nicholas aka Santa Claus is in charge of rewarding all the nice children while Krampus is responsible for capturing all the naughty ones in his sack. This “hunt for naughty kids” begins in the first week of December, when young men would dress up in scary outfits, dragging along big chains and making lots of loud noises.

This is said to stop the children from misbehaving and to help out with Christmas preparations, but boy, Krampus really is the stuff of nightmares.

Christians only make up about 1% of the population in Japan, so you may think that Christmas is not really a big deal there. But that is far from the truth.

While the Japanese don’t observe the religious aspect of Christmas, they do embrace everything else linked to it. If you have ever been to any of the cities in Japan at the end of the year, you would be amazed by all the decorations, the “Christmas specials” (food, retail etc) and the outfits that some folks wear.

There is also the quirky tradition of feasting on a KFC meal on Christmas Day. It is said that in the 1970s, an advertisement for KFC, known back then as Kentucky Fried Chicken, came out during the year-end holiday season featuring a family eating a meal at the restaurant. Apparently, the campaign was so successful that people started to associate KFC with Christmas.

Today, the restaurant has special Christmas meals ranging from holiday-themed buckets to premium roasts. If you happen to be in Japan at Christmas and are hankering for some finger-licking good fried chicken, you better have a reservation as most KFC restaurants would be booked out months in advance.

In Iceland, Santa is not really the main guy at Christmas, the Yule Lads or jolasveinar are. The Yule Lads are 13 mischievous trolls who roam the country 13 days before Christmas, visiting kids. Each of the 13 lads are named according to their um, colourful personality, like the Doorway-Sniffer, Spoon-Licker, Sausage-Swiper, Meat Hook, Door-Slammer and Window-Peeper. Gryla and Leppaludi, ‘parents’ of the 13 Yule Lads in Iceland. — DAVID STANLEY/Wikimedia Commons

A child would be visited by a different lad every night, and they would get presents from each one – but only if they leave their shows by their bedroom window, and are fast asleep. “Naughty” kids would get rotten potatoes!

Though this tradition is interesting, what’s even more intriguing is the story of the Yule Lads’ parents, Gryla and Leppaludi. According to Icelandic folklore, the older trolls are said to be awful beings who capture badly behaved children, cook them in a cauldron and... eat them.

You can find statues, theme parks and gardens that feature these trolls in many parts of Iceland.

Christmas in the Ukraine is all about spiders. Yes, that’s right. Those eight-legged creatures are not just a Halloween special, they hang around for the Yuletide season too.

According to legend, a poor widow and her kids turned a pine cone into a Christmas tree as they could not afford a proper one.

On Christmas morning, they woke up to find their pine cone covered in cobwebs, which then turned into gold and silver when placed under the sun.

These days, most trees in the Ukraine are decorated with fake cobwebs instead of tinsel, and little spider ornaments, which, to be honest, is pretty cool.

Folks who own brooms in Norway are said to hide them on Christmas Eve. Why? Well, so that the witches can’t steal them, of course. In Norway, brooms are kept in 'safe places' on Christmas Eve to avoid the witches from stealing them. — PixabayThis tradition is said to date back to a time when people believed in the existence of witches and other evil spirits disguised as humans. These witches will supposedly come out on Christmas Eve looking for brooms left outside people’s houses, and steal them to go on joyrides.

No word on whether they will steal vacuum cleaners and ride those but to be safe, just keep them inside.

How Malaysians can have a jolly Christmas holiday with their pets

Ecotourism giving iguanas a sweet tooth in the Bahamas
Malaysia's first 'aircraft reef' set to make Lang Tengah a top diving spot
8 things to know about visiting southern Sweden for first timers
Malaysian travels to six countries in three weeks before pandemic
New 'Guardians Of The Galaxy' ride set to thrill Marvel fans
Guide to travelling to El Nido, Palawan for Malaysians
What can Malaysians see, do and eat in El Nido, Palawan?
Would you holiday at this former island prison in Mexico?
Rules, traditions and quirks in Thailand that Malaysians should know
Slow travel: Malaysians are taking fewer but longer holidays