A national park is one of the best places to visit in Malaysia. You get to surround yourself in nature, learn about the biota of the place and see with your own eyes Earth’s many wonders.

And when you leave the place, you have a better understanding of and appreciation for the environment.

As a tourism destination, national parks are great for families, groups and solo travellers who are looking for unique experiences and value-for-money tours. During term holidays and long weekends, these parks are often the place of choice for many families and schools that conduct holiday camps for students.

Malaysia has a long list of national and state parks, and forest reserves, though the ones in Sabah and Sarawak are more popular, especially among international tourists.

Sabah has three terrestrial parks and six marine parks that are managed by Sabah Parks, with a handful of forest reserves and protected areas under the care of the Sabah Forestry Department and Sabah Foundation. The ones under Sabah Parks are all open to the public for visits.

In Sarawak, there are 42 parks under the care of the Forest Department Sarawak. On their website, all 42 are marked as national parks, though only 13 are open to visitors.

As Sabah and Sarawak celebrate their harvest festivals in the next few days (Pesta Kaamatan in Sabah on May 30 and 31; Hari Gawai in Sarawak on June 1 and 2), we take a look at some of each state’s top parks. Hopefully, once interstate travel is allowed, and domestic tourism safely opens up again, we can visit these parks for a grand holiday.

Kinabalu Park, located in the district of Ranau, is Sabah’s first national park, and one of the first in Malaysia. In December 2000, the park became a Unesco World Heritage Site, awarded for its role as one of the most important biological sites in the world. 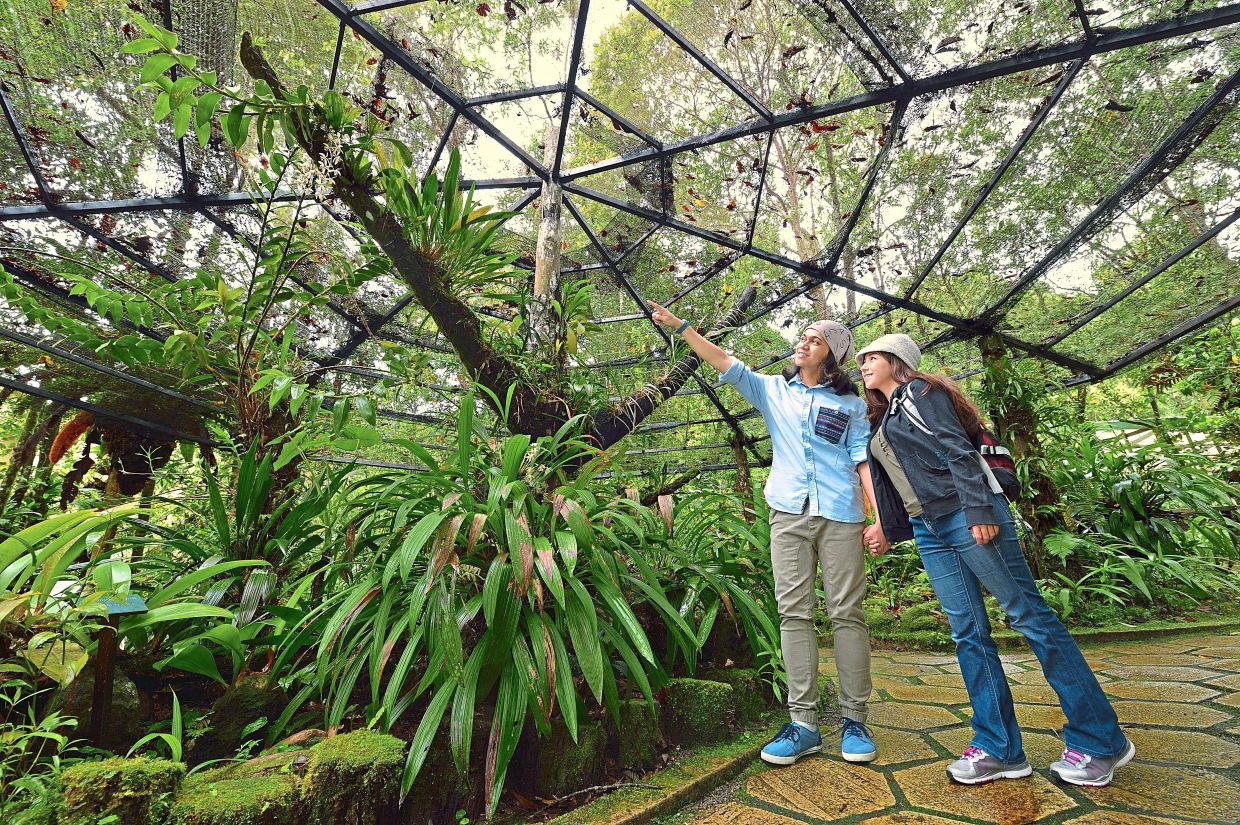 Kinabalu Park is a great place to bring the family.

The park covers an area of 754sq km, and was gazetted in 1964 as a way to protect Mount Kinabalu and its flora, fauna, fungi and all other life forms.

And in case you didn’t know, another significant mountain can be found within the park: Mount Tambuyukon, which stands at 2,579m. In the past few years, more adventurers have taken on the challenge of climbing this mountain, known as the third highest peak in Sabah (the second is Mount Trusmadi, which stands at 2,642m).

You can visit Kinabalu Park at any time of the year, but if you’re interested in climbing either mountain, you can only do so during certain months for safety reasons.

However, do check with Sabah Parks or a licensed tour agency before doing so in case new rules and regulations have been tabled.

The Crocker Range Park, which is 75km long and 15km wide, runs through eight districts in the west coast including Penampang, Beaufort, Papar and Tambunan. It is Sabah’s largest terrestrial park, spanning an area of 139,919ha – roughly the size of Singapore.

In June 2014, the park was recognised as a biosphere reserve by the International Coordinating Council for Biosphere Reserve, a programme under Unesco.

Most of the Crocker Range Park is covered in forest, and one of the last remaining hill dipterocarp forests in Sabah can be found here.

There are seven substations located within the park, and you can visit most of them. The Mahua substation in Tambunan, for example, is famous for its 17m-tall waterfall. Meanwhile, the Inobong Visitor & Research Station at Penampang is very popular with city dwellers as it is the nearest to the capital, Kota Kinabalu, and the most accessible too. 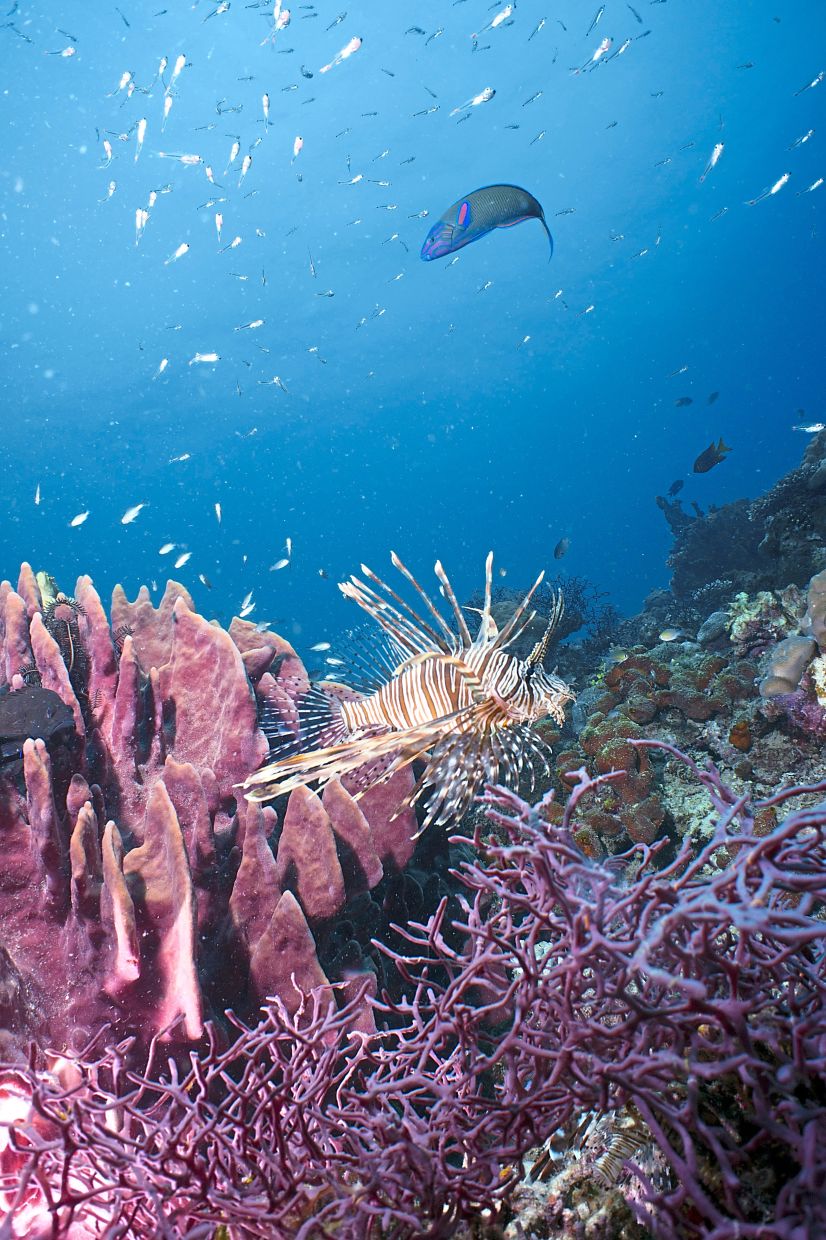 Tunku Abdul Rahman Park comprises five islands which are only a short boat ride away from Kota Kinabalu.Sabah boasts many beautiful islands, as well as a diverse marine life. If you are visiting Sabah for the first time, and only have time to check out KK, then make sure you head to the Tunku Abdul Rahman Park. This marine park is only 3km away from the city, or a 15- to 20-minute boat ride from the port.

Tunku Abdul Rahman Park was gazetted in 1974 as Sabah’s second national park, and covers an area of 50sq km comprising five islands. This also includes the surrounding reefs and waters.

The islands – Pulau Gaya, Pulau Mamutik, Pulau Manukan, Pulau Sapi and Pulau Sulug – have their own administrative offices, with Manukan being the headquarters.

There are accommodations available, but the islands are mostly popular with daytrippers, many of whom take part in snorkelling and diving activities nearby.

Island hopping is one of the best ways to spend the day here, as the islands are all located within a short distance of one another. If you’re a solo traveller and you wish to do this, it is best to let the boat company know of your plans when you get your ticket at the port.

Famous for being the first location of the Survivor reality show (in 1996), Pulau Tiga Park was gazetted in 1978 and covers an area of 158sq km, most of which is sea. The place was designated a forest reserve much earlier though, in 1933, for its diverse marine life as well as its flora and fauna. When visiting Pulau Tiga aka Survivor Island, make sure to roll around in the natural volcanic mud.

There are two resorts as well as camping sites on all the islands, as most visitors prefer to spend a night or two. Make sure to check out the natural volcanic mud, and enjoy its therapeutical benefits.

One of the best diving spots in the world thanks to its incredibly rich marine life, and not forgetting one of the most beautiful islands around, Sipadan Island Park is Malaysia’s only oceanic island. This means that it is an island that rose to the surface from the seabed; in this case, Sipadan rose 600m from the ocean floor.

Located near Semporna in the east coast of Sabah, the park lies in the Celebes Sea and is pretty close to the Indonesia and Philippines borders. More than 400 species of marine life in the area have been recorded and classified, while above ground, monitor lizards, fruits bats and tropical birds can be found. In fact, Sipadan was declared a bird sanctuary in 1933. In 2004, it was gazetted as a marine park and protected area.

Only a number of visitors are permitted in daily, and no overnight stays are allowed at all.

Bako National Park, near the state capital Kuching, has been a national park since 1957. It covers an area of 27sq km, and has a wide range of vegetation – from swamp forest and mangrove forest to dipterocarp forest and cliff vegetation. In fact, it is said that you find a majority of the Bornean vegetation within Bako itself. 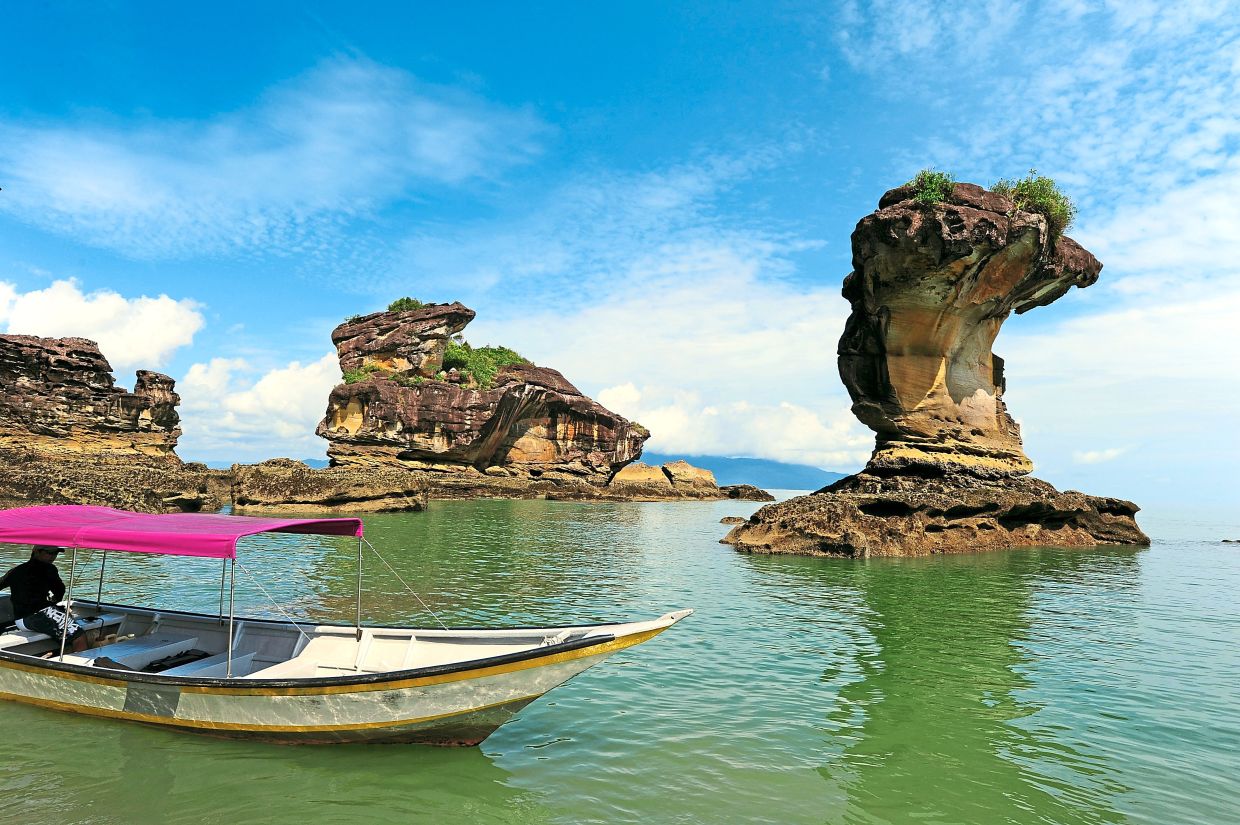 There are also a number of fascinating animals found here, including the proboscis monkey (and wherever there are proboscis monkeys, you can almost always find the silver leaf monkeys) and the bearded pig. Locals say that a visit to Bako is not complete until you bump into a wild animal, as they are quite used to human presence and will not shy away.

However, please remember to never feed any of the animals.

There are as many as 16 colour-coded walking and hiking trails ranging from 500m to nearly 6km in this national park, too, perfect for daytrippers as well as overnight guests.

You can also find a few chalets, rest stops, cafetarias and other basic facilities within the park. For overnight stays, you may need permits so do check with the Bako National Park office or a local tour agency.

Over in Miri lies the world- famous Gunung Mulu National Park, a Unesco World Heritage Site (for Outstanding Natural Beauty). It has one of the most extensive cave systems in the world, river rapids, lush jungles that are perfect for trekking, and unique communities. 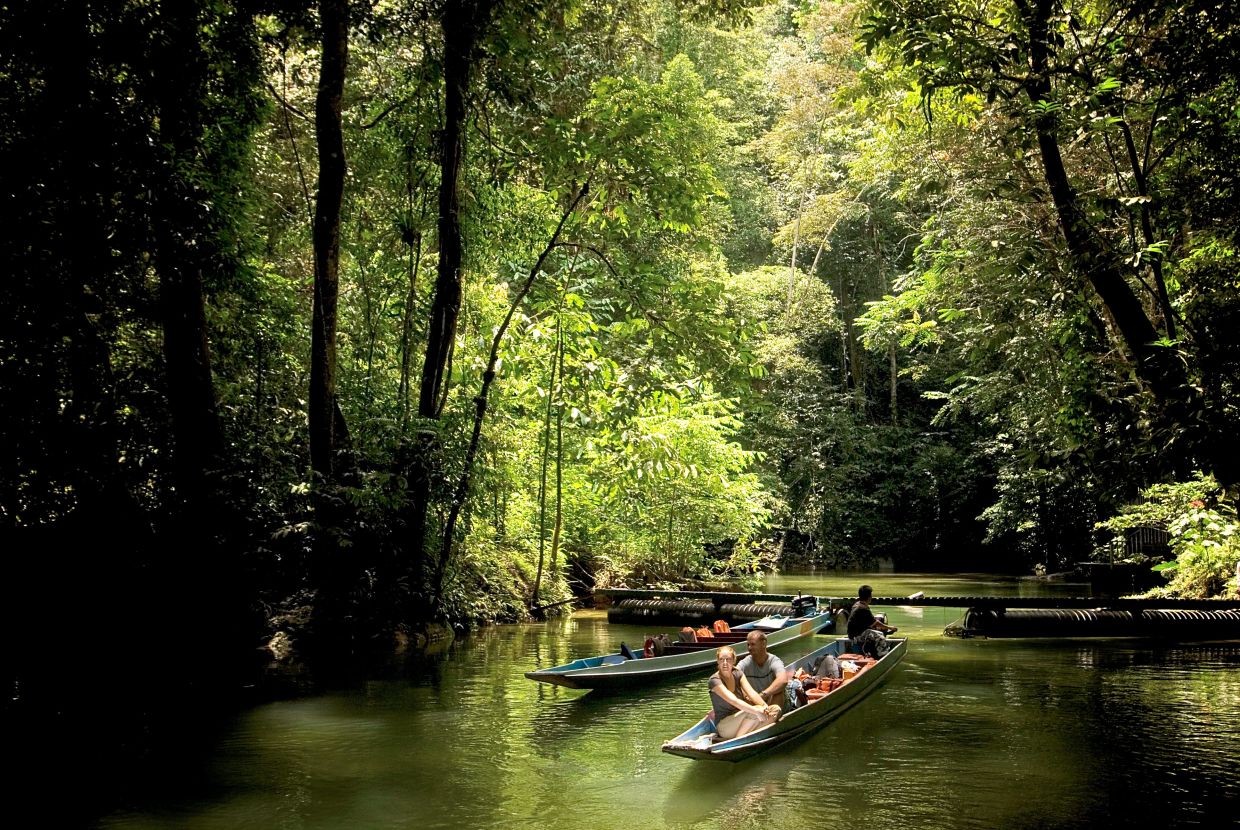 In fact, here is where you can find Sarawak’s last nomadic tribes.

Among the flora found here are 170 species of wild orchids and 10 species of carnivorous pitcher plants.

To properly visit the Gunung Mulu National Park, you would need a licensed guide as the place is truly vast (528.6sq km!), while some areas are hard to get to. At Niah National Park, you can find artefacts and remains from ancient times.

The 3,138ha-large park is made up of rainforest and limestone hills. The place is interesting for many reasons among which are the Palaeolithic and Neolithic burial sites, ancient cave paintings and one of the world’s biggest cave entrances (the cave mouth of the Great Cave).

The Great Cave itself is worth a whole day’s visit as there are records of human life dating back some 40,000 years ago, one of the oldest human remains found in South-East Asia. The cave is also where local Penan folk go to harvest birds nests, built high in the cave by swiftlets.

Other caves you can find at Niah include the Moon Cave (Gan Kira) and Painted Cave (Gua Kain Hitam), while the two walking trails you can follow are the Bukit Kasut and Madu trails.

Although Niah is not as internationally-renowned as the Gunung Mulu National Park, it actually offers more attractions to visitors, so an overnight stay here is recommended. There are chalets available as well as an Iban longhouse homestay nearby.

Just 30km northeast of Bintulu is the Similaju National Park, home to 185 species of birds (including hornbills, Sarawak’s state bird) and 24 species of mammals like the banded langurs, barking deer, civet cats and gibbons. Similaju is essentially a chain of sandy beaches, with jungle streams and forests in between.

And if you go on one of its hiking trails, you may even get to see some turtles, the false gharial (tumistoma schlegii, a somewhat harmless crocodile species) and estuarine crocodiles, which are the world’s largest. These crocodiles are usually spotted at night so be sure to ask your nature guide to arrange for that – do not go on your own.

Similaju is essentially a chain of sandy beaches, with jungle streams and forests in between. It is 8,996ha in size and very popular with locals, especially during the weekends and on school holidays.

Green turtles come ashore during nesting season at the Golden Beach, as well as the two Turtle Beaches. If you’re lucky, you may even see a leatherback or hawksbill turtle, the Irrawaddy dolphin, bottlenose dolphin and finless porpoise dolphin.

Legend has it that Puteri Santubong and Puteri Sejinjang “live” at Gunung Santubong, and are the mountain’s mythical caretakers. This Iban folklore is enough to entice many tourists to visit the Santubong National Park, merely a 35-minute drive from Kuching.

Apart from the mountain itself, other attractions in this small-ish national park (17.4sq km) include the Sarawak Cutural Village, mangrove forests which you can trek to, river cruises and other water sports, Indo-pacific humpback dolphin sightings and local fishing villages.

Adventure seekers can hike up the Santubong Summit and then to the waterfall nearby.

How to reduce plastic usage while on holiday
Hanoi's Instagram hotspot 'Train Street' cautiously reopens�to tourists
The 10 most mesmerising mosques in Malaysia
Elvis death anniversary and recent movie increases tourism at his birthplace
Discover a mystical landscape in Bastei, Germany
Why it's fun to holiday in Kota Kinabalu: From the mountain to the sea
Religious schools help revive the Moroccan city of Fez
No monkey business on this Malaysian-owned estate in London
How a hotel satisfaction promise has led to more discontent
For some Americans, Europe is the best budget-friendly place to visit this year