Who is Lena Situations and how is she conquering the global fashion world?

Lena Mahfouf aka Lena Situations poses on the pink carpet during the opening ceremony of 4th edition of the Cannes International Series Festival in October. Photo: AFP

The stylist and blogger, Chiara Ferragni has become one of the world's most powerful names in fashion in just a few years.

She'd better watch her back though, as Lena Mahfouf – better known under the pseudonym Lena Situations – could be set to steal the show.

She may only be 24 years old, but she can already boast of collaborations with some major fashion houses, of seeing her name in the prestigious New York Times, and of being featured in one of Forbes' famous lists.

Married to the Italian rapper Fedez, Ferragni became known in the late 2000s with her blog The Blonde Salad, which enabled her to build a veritable empire, including collaborations with fashion houses like Dior and Chanel, among others, the launch of her own fashion brand, and followers galore.

The Italian blogger enjoys an international reputation, to the point of being named the most powerful fashion influencer in the world according to Forbes.

Followed by nearly 26 million people on Instagram, the young mother has managed to make quite a name for herself in the fashion world. But in 2021, Lena Situations seems to have had even more impact...

A fresh dose of authenticity

At a time when social networks are proliferating, and self-expression and authenticity are the new watchwords, it is Lena Situations, with her willingness to show herself as she is, who seems to have scored a major hit.

Just 24 years old, the YouTuber and blogger – or whatever you want to call her – clearly set herself apart with her simple straightforwardness, showing herself without make-up as much as in high-flying outfits, and tapping into the codes that speak to new generations: authenticity, inclusiveness and kindness.

Those three words are making her such a big hit at the moment – and of the future.

Launchmetrics, which has developed the Media Impact Value (MIV), an algorithm to measure the impact – and therefore the value – of placements and mentions on different platforms in the fashion, luxury and cosmetics sector, tells us in its latest review that Lena Situations is by far the most powerful influencer of the moment.

While she has fewer followers than Ferragni on Instagram – a mere 3.4 million – Lena Situations can look back on a successful collaboration with Dior, as well as being the focus of a long-format piece in the New York Times, and being listed among Forbes' "30 under 30" rising talents to watch in the movies and entertainment sector.

According to Launchmetrics' final ranking of the year, based on the top influencers in the luxury fashion and beauty industry in 2021, the young woman takes first place.

Note that the American influencer Emma Chamberlain takes second place this year, with an estimated MIV of US$2.33mil (RM9.8mil) for the house Louis Vuitton, half as much as the French rising star.

Ferragni follows with more than US$450,000 (RM1.9mil) for Fendi. Still, with the Italian blogger's multiple partnerships with major luxury labels, as well as her own brand and her host of other activities, Chiara's days of influence are far from over. – AFP Relaxnews

Yearender 2021: Looking back at a time of renewal for the fashion industry 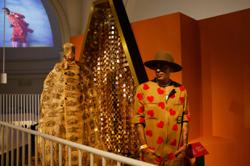 First-ever 'Africa Fashion' exhibition opens in London
Blackpink's Lisa is a force to be reckoned with in fashion
Fur in fashion is bad, but fashion for fur babies is a welcome thing
Malaysian brides return to elegant, romantic hairstyles for their weddings
Remembering 'Mr Nobody': Ray-Ban billionaire owner came from nothing
Fashion as usual for Russia, as Moscow Fashion Week ends on high note
Blackpink's Lisa, V of BTS and Park Bo-gum turn heads at Paris Fashion Week
From milky blonde to vanilla almond butter, lighter hair shades are all the rage
Weird 'peanut butter nail' beauty gimmick draws flak on TikTok
South-East Asian fabrics should be treasured, which include Malaysia's tenun