Yearender 2021: Looking back at a time of renewal for the fashion industry

If 2020 was seen as a difficult time for the fashion industry, this year proved to be just as eventful and challenging.

There is more of a burgeoning spirit of resilience though. You can perhaps even call it defiance. Everyone from designers to retailers embraced the changes that they needed to make to survive – and learnt from the experience.

The loss of notable talents was saddening, but in their departure, they left behind a legacy that will continue to influence how we dress.

Virgil Abloh (pictured here on the cover) only recently left the world. During his celebrated career, the streetwear legend has been credited in having successfully shifted luxury fashion’s gaze to hip hop and skate culture.

Alber Elbaz, best known for restoring the fortunes of Lanvin while serving as creative director of the French fashion house from 2001 until 2015, died in April. He was one of the most respected names in fashion.

Read more: How the metaverse has become fashion's latest playground

It is not all doom and gloom though. Several big names made a comeback of sorts. Jean-Paul Gaultier for example, returned to couture. This was after announcing his retirement last year.

In June, he unveiled a collaborative collection with five young designers. They were invited to reinterpret his namesake brand’s classics. The move signified a rebirth of fresh styles, with the coming together of old and new.

Other labels returned to the runway after a hiatus. No matter whether their absence was due to the pandemic or other factors, we should celebrate. This year is definitely a period of re-emergence for fashion.

Among the notable highlights for the fashion scene in 2021 is the return of runway shows. After almost a year of being forced to go completely digital with video presentations or short films, it marked a comforting shift back to normalcy.

A lot of the major fashion weeks around the world still maintained their online platforms, but allowed designers to put on grand shows with physical guests once again – and it was certainly a spectacle.

Fashion capitals New York, London, Milan and Paris came back to life in this manner. Fashion shows returned to physical runways this year. Photo: Michael Kors“After two challenging seasons with no in-person gatherings, we anticipate a significant return to live shows,” Council Of Fashion Designers Of America (CFDA) chairman Tom Ford said, back in May.

The CFDA welcomed rousing runway shows for its fashion week in September.

Designer Michael Kors even went so far as to send his models walking down the streets of New York City. It was staged in the heart of the bustling metropolis under the lights of Broadway theatres.

In Paris, the Haute Couture Week saw Dior, Chanel, Zuhair Murad and more showing on physical runways. Their events were scattered around, with venues ranging from the Rodin Museum to La Samaritaine department store and historic Hotel De La Marine.

Chanel held its show (plus a retrospective on founder Gabrielle Chanel) at the newly renovated Palais Galliera. It was seen as a show of strength for Paris.

“It’s become one of the most beautiful fashion museums in the world, and the fact that we’re doing our show there is also a way of supporting fashion in Paris,” Chanel president Bruno Pavlovsky pointed out to the media.

Another highlight of the year is Kerby Jean-Raymond. The designer became the first-ever Black American designer to show at Paris Haute Couture Week.

He is the founder and creative director of Pyer Moss, a fashion label that has quickly gained recognition since its launch in 2013. His runway shows are known to be memorable fashion extravaganzas.

Jean-Raymond used his haute couture debut to shine a spotlight on Black inventors. Using 3D construction and sculpture, he drew all eyes to outfits that resemble inventions like the automatic traffic signal and portable air conditioner.

This year also saw several brands resurfacing. Balenciaga presented an haute couture collection for the first time since 1968. It also included men’s outfits. The world of haute couture has traditionally been the sole preserve of women.

“Haute couture is the very foundation of this house, so it is my creative and visionary duty to bring couture back,” artistic director Demna Gvasalia said in a statement.

“It not only offers another spectrum of possibilities in dressmaking, it also brings the modern vision of Balenciaga back to its sources of origin.”

The late founder Cristobal Balenciaga, long regarded as “the master” of haute couture, shuttered his atelier in 1968. It was said to have coincided with the rise of ready-to-wear.

His label then relaunched 18 years later under a series of creative directors, but without haute couture collections. Gvasalia’s designs this year marked the Balenciaga fashion house’s much anticipated return to its roots.

French couturier Gaultier also made an exciting comeback. He announced his retirement from the runway in January 2020 after 50 years in fashion, but then returned this year – but in a different and unusual form.

His label is now tapping a new designer each season. Five have been enlisted to “reinterpret the JPG codes” for the collections so far, with Sacai’s Chitose Abe being the first.

“It was a very intimate, more friendly proposal,” Abe told Vogue backstage before the unveiling of her takeover in July. “An invitation to come over for tea. It didn’t feel like two companies coming together, but instead like two people.”

Glenn Martens, who is artistic director of Diesel and Y/Project, will be up next. His collection with Gaultier is scheduled to launch in January.

Gaultier has recently even curated his own museum exhibition. Cinemode, which opened October at the Cinematheque Francaise in Paris, showed the evolution of women and men in cinema and fashion. Jean-Paul Gaultier took up the challenge to curate a fashion exhibition this year. Photo: AFP

"It's a new stage. I don't want to do simply fashion anymore," he told AFP.

"This feels like I'm creating a new collection. It's a new adventure, mixing fashion with cinema. The theme is the mix of styles – the poor with the rich, the working class with the aristocracy, the extremes meeting each other and creating new babies.”

Legacies to be remembered

This month’s news of Abloh’s death probably came as a shock to many. The 41-year-old had been suffering from cardiac angiosarcoma (a rare form of cancer in which a tumour occurs in the heart) for two years.

“He chose to endure his battle privately since his diagnosis in 2019, undergoing numerous challenging treatments, all while helming several significant institutions that span fashion, art, and culture,” read the statement, released on his Instagram account after his passing.

In 2018, Abloh became the first Black artistic director of menswear at Louis Vuitton. His other achievements include launching his own successful fashion label called Off-White back in 2013, as well as being involved in various other notable collaborations.

He is said to have changed the fashion rules. He brought streetwear into the realms of high fashion – and made youth culture a major inspiration for his designs.

The man is also not afraid to poke fun at style and often sought to send the message that everyday items can be viewed as luxury ones. His actions were seen as “democratising” fashion. 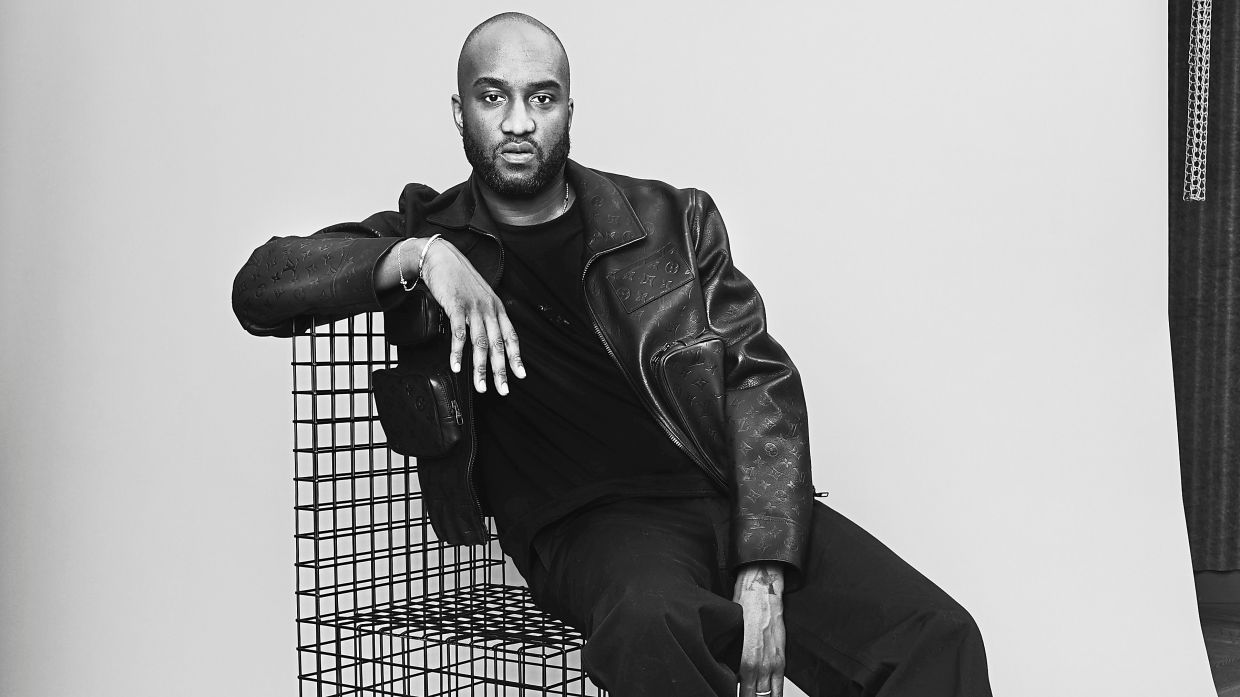 Another legend that will be missed is Elbaz. He died of Covid-19 in April at the age of 59.

The October Paris Fashion Week closed with a homage to the designer. His life and work will be celebrated even further, as there are now plans to turn the runway tribute into an exhibition for all to see.

The Palais Galliera is set to feature every single look that was created for the occasion, including those from Alexander McQueen’s Sarah Burton, Balenciaga’s Gvasalia and Dior’s Maria Grazia Chiuri.

Elbaz was certainly a talented designer, but more than that, he is said to be humble and kind. His passion for fashion is apparent in all his interviews.

“If I wasn't a designer I would love to be a doctor. That is my fantasy, my dream. A doctor will give you a tablet if you have a headache and I will give you a dress and we both make you feel good,” he told The Guardian in 2007.

Yet, what the industry will always remember is how he revived the Lanvin brand by making it more modern. During his 14-year tenure, he adopted a “women first ethos” – transforming the fashion house into a favourite among a new generation of consumers.

He made a return in the Spring/Summer 2021 couture schedule with AZ Factory in January. The concept behind his then new brand was to celebrate body positivity and bring happiness back to fashion.

If there is one word to sum up 2021 for fashion, it would be “renewal”. In the many changes witnessed this year, it gave the industry a good reason to soldier on.

Optimism in the face of hardship has become an ethos and there is nothing more fitting than looking for new ways to keep creativity alive.

Is the 'perfect body' a thing of the past? Self-acceptance now on the rise
Vanity Fare: Pamper your lips with the right products
Amy Winehouse's revealing two-pieces go on display at a bikini museum
Ariana Grande, Billie Eilish and Rihanna top the list of celebrity scents
Johnny Depp to return as face of Dior’s Sauvage cologne after winning suit
Malaysian menswear tailors forced to adapt, but suits will live on
'His legacy will be everlasting': Fans mourn the death of Issey Miyake
Japanese fashion designer Issey Miyake has died aged 84
Savile Row fights to stay relevant as suits in menswear fall out of fashion
Footballer Son Heung-min shows off body for Calvin Klein underwear campaign