Among the many things that James Bond excels at is his ability to look fashionable – no matter the situation. The secret agent appears impeccably dressed all the time, whether in brawls or high-speed car chases.

While suits are his pride point, it is the watches he wears that often catch the eye.

For good reason too. Bond has maintained a long relationship with one of the world’s foremost watchmakers, Omega. The horological designs he straps on are thus marvels to behold.

In the current film, No Time To Die, he wears a watch influenced by Daniel Craig. The actor’s knowledge of Bond is said to be critical in creating a suitable new timepiece for the spy.

“When they showed it to me, I genuinely said, ‘You’ve done it’. There was nothing in the end that I needed to add,” Craig comments, about the collaboration.

“There’s the style of it, of course, but it’s also close to a military watch, and you have that heritage with Omega and the British army watches of the second World War. All of those things that I wanted to connect through, they’ve done it. I’m over the moon with it.”

No Time To Die is the 25th film in the series. It stars Craig in his fifth and final outing as Bond and tells of how he is recruited by the CIA to find a kidnapped scientist – after having left active service. 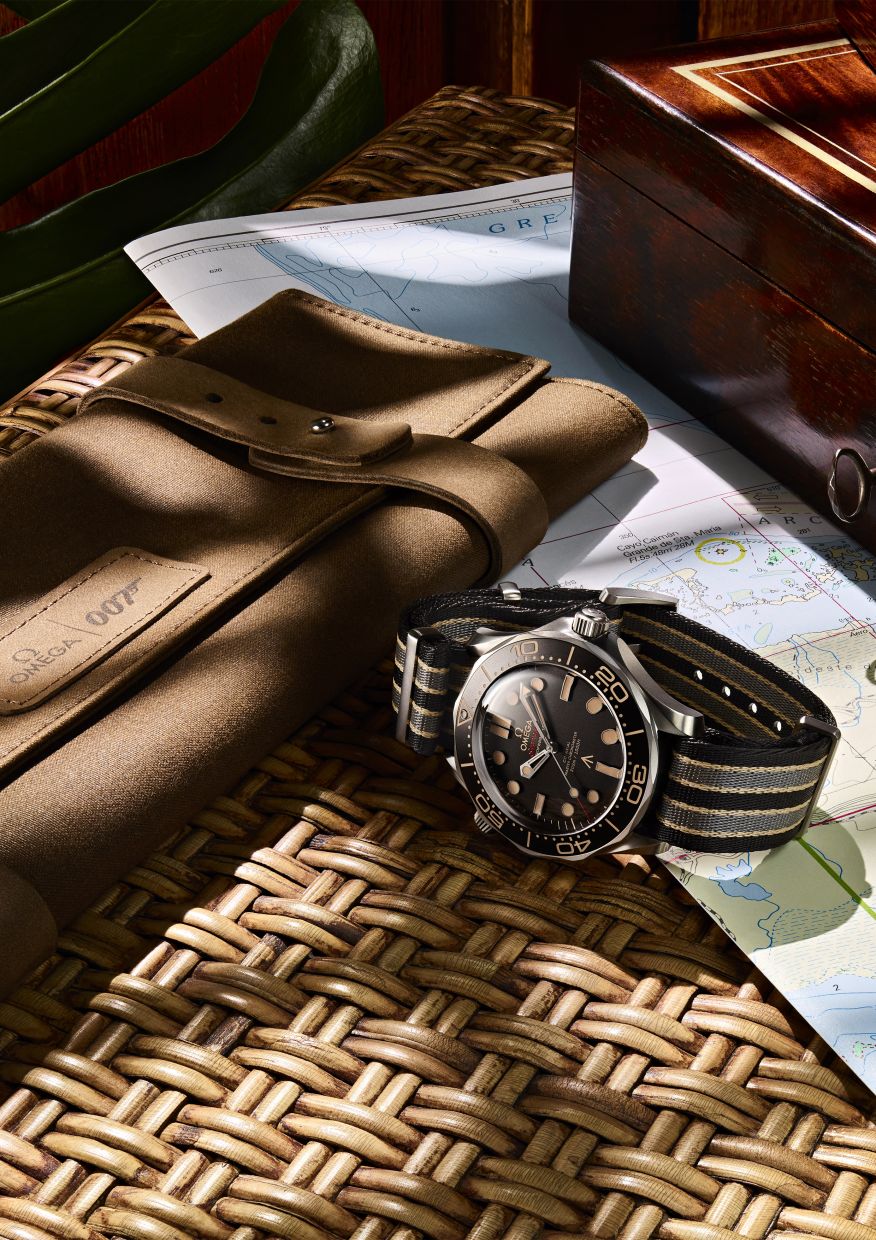 Although customers who wear this watch may not be expected to save the world, it is still a mighty impressive accesory. Photo: OmegaThe Omega watch released for the occasion fits in nicely with the storyline. It is an updated Seamaster Diver 300M.

“He’s sort of retired. He’s in Jamaica. He’s on his boat. So probably, a little more by accident than design, it worked perfectly,” Craig explains.

“The fact it’s a diving watch is great, because we hint that he’s diving in the first part of the movie. Plus the strap, which feels vintage in a kind of 1970s way, I really like that kind of touch. Like a ‘60s, ‘70s divers watch. It feels like that period.”

The Omega Seamaster has been a part of Bond’s attire since Golden Eye in 1995. It has faithfully served him in every one of his action-packed missions. The models may have changed, but the relationship has never faltered.

In Skyfall (2012), Bond relied on the Planet Ocean 600M and somewhat dressier Aqua Terra, both powered by Omega Co-Axial calibres.

For the last film, Spectre (2015), he strapped on another two watches – the Seamaster 300 Spectre Limited Edition and Aqua Terra 150m.

Craig says he always appreciates how open the watchmaker has been. It is not the case of being presented with a timepiece.

“It shouldn’t just be that you turn up on the first day of shooting and they say, ‘This is your watch’. I’m just not built that way,” he notes. “I always thought that we should be talking to each other.”

Bond is not the only character sporting beautiful watches though. In No Time To Die, the women have a love for them too.

That said, the new Seamaster Diver 300M 007 Edition that Bond wears (and available for purchase by fans) remains an integral part of the film.

In one scene, Bond shares his own admiration with the character Q, saying: “Just showed somebody your watch. It really blew their mind.”

Craig shares the same appreciation for timepieces too.

“My first Omega watch was given to me on my 18th birthday by my dad. It was a gold dress watch. I wore it so much, one of the arms came off and I lost it. Sadly, it disappeared. But that was my first proper watch, so I’ve always had a love for old Omegas.”

Perfect time to go 'green'? Watchmakers are embracing the upcycling trend too

While women are swapping out stilettos for sneakers, men are doing the opposite

Top beauty-related mistakes you're making, and how to fix them
Designer Daniel Lee replaces Riccardo Tisci at Burberry
Why you should include castor oil as part of your beauty arsenal
Young Black designer dresses Colombian vice-president in 'resistance' fashion
Believe it or not, you can curl your hair by just using a soda can
Kim Kardashian culls Dolce & Gabbana archives for Milan Fashion Week show
Vanity Fare: Fresh, radiant and bold fragrances to lift your mood
Designer handbags made from stale bread? This fashion brand wants your dough
What is a Brazilian manicure and why is it now a beauty fad?
Turning sushi into sneakers? This is not just a mere 'fish story'