She will be a campaigner for the UN Population Fund, which now calls itself the UN’s sexual and reproductive health agency, known as UNFPA.

UNFPA Executive Director Natalia Kanem, who announced her appointment, called Vodianova "above all a passionate, longtime advocate for the rights and the needs of women and girls and in particular people living with disabilities”.

Read more: Supermodel Coco Rocha on the pandemic: 'It’s going to be the long recovery'

Working with UNFPA for the last three years, Kanem said, Vodianova has focused on "breaking harmful taboos and tackling the stigmas that surround women’s bodies and health, including menstrual health even during humanitarian crises, and all forms of gender-based violence”.

Vodianova, who will celebrate her 39th birthday on Sunday, said she was honoured by her new role and told a UN press conference by video link.

"I look forward to continuing my work to tackle the myths and taboos that billions of women, girls and vulnerable young people have to live with and raise the standards of women’s health and dignity."

Vodianova was raised in poverty by a single mother with a half-sister who has cerebral palsy and autism. She signed with Viva Model Management at the age of 17 and has worked for fashion companies including Calvin Klein, Balmain, Stella McCartney and Louis Vuitton and appeared on many magazine covers, including Vogue.

She made the Forbes top models list in 2012 and is nicknamed Supernova. Vodianova founded the Naked Heart Foundation to help children with special needs and their families in 2004 and is a member of the Special Olympics International board of directors.

She told reporters that one focus of her work as a goodwill ambassador will be on the taboo and stigma surrounding menstruation, a monthly challenge for girls and women.

On any given day, UNFPA said more than 800 million girls and women between ages 15 and 49 are menstruating, and may face exclusion from public life, barriers to opportunities, lack of proper sanitation and health, and neglect.

"These stigmas and taboos are deeply rooted in our cultures and held there with such an overwhelming power," Vodianova said. "And it doesn’t matter where you’re born... you will face these issues growing up in one way or another."

She said a good example is that "period products, something that is a right for women, not just something nice to have" are still not widely publicly available in many countries.

"It is now our responsibility to culturally redefine what is normal," Vodianova said. "As UNFPA goodwill ambassador, I want to work to build a world where we no longer need to explain this." – AP 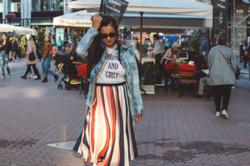