Malaysian actor Lawrence Wong on lockdown: 'It changes the perspective you have on time'

The actor, famed for his role in Chinese drama 'Story Of Yanxi Palace', has had to endure a quiet time indoors during the pandemic.

If you happen to love Story Of Yanxi Palace, the wildly popular Chinese period drama spanning a whopping 70 episodes, then you’ll probably recognise Lawrence Wong. While he was not the lead actor in it, he captured hearts all the same.

The Johor-born star catapulted to fame after playing kind-hearted imperial guard Hai Lan Cha in the 2018 television series. He was even ranked 35th in the list of most influential artistes in China because of it.

This is in addition to several international awards he got for acting that same year. He was also named Montblanc’s first “Friend Of The Brand” in Malaysia, a role that recognises his ability to genuinely connect with audiences.

Two years on, Wong’s relationship with the luxury watchmaker has remained steadfast. His love for adventure (both literally and metaphorically) resonates with the brand – and he has appeared in several photoshoots promoting its timepieces.

You could say that the 31-year-old has always lived in the fast lane. With the current pandemic going on however, he is learning to come to terms with a more quiet life indoors – or so he says, in an exclusive chat with StarLifestyle conducted via email.

“I have been self-recording a lot of interactive content and interviews for various media to promote my drama that is currently airing. Otherwise, I am mainly spending my time resting, catching up on my reading and just enjoying the rare free time, ” he reveals.

“Staying at home, or rather having the whole country staying at home, changes the perspective you have on time. Suddenly, you have so much of it to deal with yourself and your own issues.”

Wong’s career is still buzzing though. His rom-com Girlfriend reportedly garnered over a hundred million views within 30 hours of its release in April. He plays a CEO who falls in love with the woman hired as a pretend date.

if you are a VIP member of #MangoTV, you would have finished the last episode of “Girlfriend” yesterday. this has been such an incredible journey and response for my first male lead role in China. i thank all of you for your love and support. “Girlfriend” is now also showing on Singapore’s Channel 8. #楼下女友请签收 #叶非墨

He also has several more upcoming dramas, which adoring fans can keep an eye out for. According to him, two of them – titled One Boat One World and Love And Passion – will be broadcast this year.

“I will be shooting a new series about ghosts, playing the role of a research student who can see into the spirit world. He is kind-hearted and full of love, and finds himself helping spirits to fulfil their incomplete tasks so that they are able to move on to the after life, ” he adds.

In the past, he has appeared in local television series like In Laws, A Time To Embrace and Tribulations Of Life. This is in addition to his roles in Singapore productions, after which his acting career took him to China to film Story Of Yanxi Palace.

Maybe Wong is just not suited for a life stuck indoors. He is after all, a self-professed avid adventurer. He has backpacked across Europe, South America, United States and Asia in the past.

He is also a nature lover. Last year, when attending the Salon International De La Haute Horlogerie trade show in Geneva (now rebranded Watches And Wonders), he described himself as “a risk-taker, adventurous soul and traveller”.

His character fits in well with the Montblanc 1858 family of watches – both old and new. Inspired by the adventurous world of mountain exploration, they are accurate, legible and robust for use in extreme conditions.

“I have last year’s limited edition in bronze and khaki colour, paired with nato strap that gives it a vintage sporty appearance, ” says Wong. “With this year’s blue dial coupled with white luminescent Arabic numerals and indexes, it immediately changes into a contemporary elegant look.”

Wong would be the best person to know, as he travelled to St. Moritz, Switzerland, (before the world went into lockdown) where he was photographed with the latest Montblanc 1858 model. 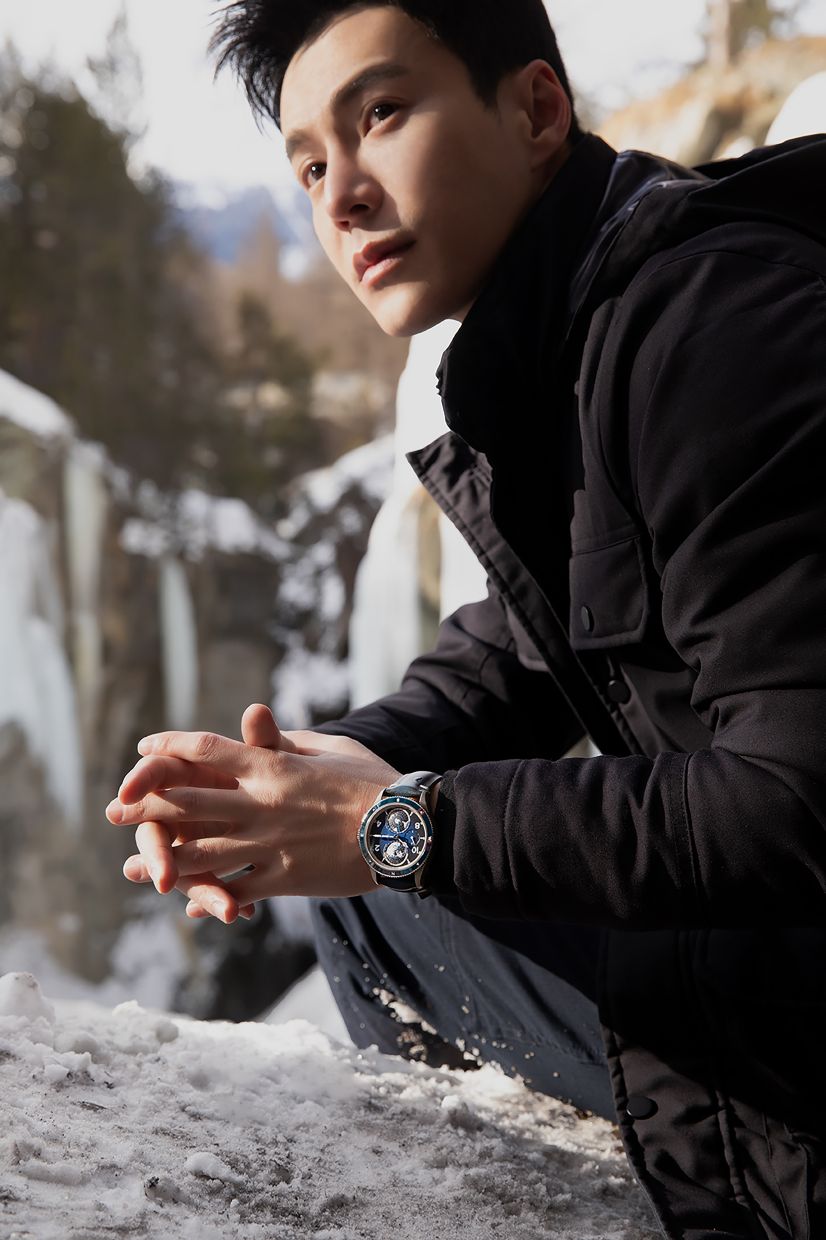 “I always embrace challenges and the unexpected, push myself into the unknown for experimentation and impact in order to leave a mark, ” he says, drawing a parallel between his career and life and the spirit that the watchmaker holds dear.

His favourite Montblanc watch so far is the 1858 Geosphere. It features the Northern and Southern Hemispheres on the dial, with each completing one rotation every 24 hours using an in-house world time complication.

“I used to go backpacking but it has been years since I did that, mainly because I just don’t have the luxury of time anymore with my hectic and erratic work schedule, ” says Wong who looks back fondly at his St. Moritz trip.

“The natural surroundings gave me a sense of tranquillity and restored my spirit in this hurried age. It sharpened my mind and I realised at that particular moment, my priority becomes clearer and obligations seem less pressing.”

On his career and exciting pivot to international fame, Wong modestly points out, “My journey in acting has been an amazing process of self-realisation and fulfilment, supported by many along the way.

“Most of my memorable experiences are with kind, nurturing people who believe in me, as well as lifelong friends I’ve made throughout my journey.”

And, like all of us cooped up at home, Wong is yearning for life to return to normal – in the best way it can. In his case, he just wants some time to be able to enjoy and connect with nature again.

“I love nature for its revitalising power and it’s the best remedy for overcoming tiredness. Whenever I am outdoors in nature, I find it very relaxing and it heals my soul. I would love to have my usual walks at my favourite parks again.”

Fashion in pictures: Beautiful novelties of the 2020 luxury watch world

Bikinis are out of style? Swimwear favour sporty cuts like the tankini instead
Do you have prominent under eye dark circles? Try covering them with blush
Aishwarya Rai and more, the best red carpet looks at Cannes Film Festival
Hand-painted personalisation for fashion lovers
How Asian celebrities are taking over the fashion world, one brand at a time Premium
Petroleum jelly is being used to replace mascara, and the results are amazing
The sweet smell of trash? Perfumers are using waste to concoct new scents
Celebrity Style: Why Rihanna is such a maverick in the fashion world
Vanity Fare: Restore and refresh with the right beauty products
Style Watch: Actress Jasmine Suraya Chin shows versatility in dressing up